We Need to Talk About Brad 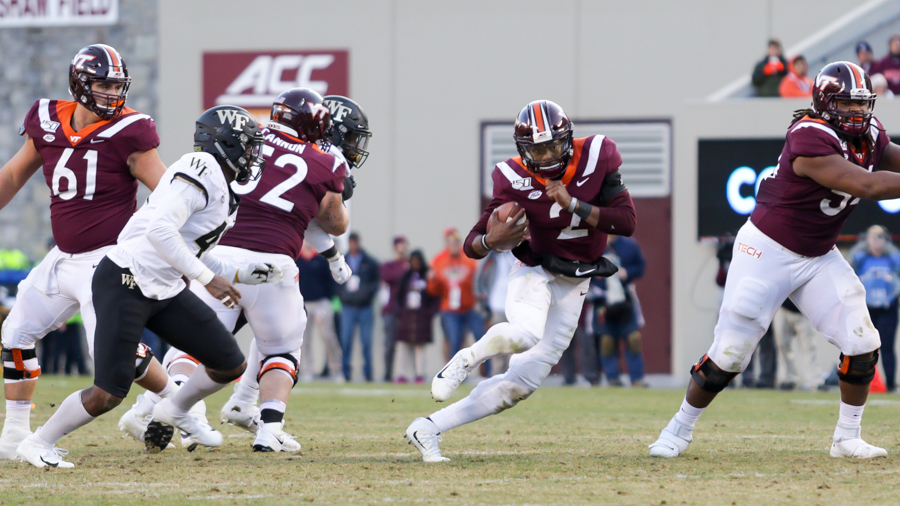 You can't talk about Brad Cornselsen without first talking about Bryan Stinespring.

Stinespring was Frank Beamer's guy. A Virginia Tech lifer who began his tutelage under the legendary coach as a graduate assistant in 1990 before rising up the ranks. During his time in Blacksburg, Stiney was a tight ends coach, offensive line coach, ran Tech's recruiting operation, and eventually landed in the big chair. Well, the biggest chair available.

Stinespring became offensive coordinator in 2002, and you probably think you know how the rest of it goes. Things go poorly. Fans get mad. Pitchforks, torches, and "Fire Stinespring" chants descend on the Merriman Center for a decade leaving Beamer no choice but to eventually demote his friend.

While the final chapters of the story are true, it's not exactly how things went down. In fact, there's an argument to be had that more often than not, Stinespring oversaw good offenses. Between 2002 and 2005, the Hokies had a relatively explosive attack:

2004: 30.8 points/game (25th nationally, a conservative offense with young receivers puts up 31 a game down the stretch as they win eight in a row to take the ACC.)

Not too shabby. They were average in total offense, and there were moments of utter bedwetting — I'm not sure I'll ever get over Marcus Vick turning the ball over six times and getting the doors blown off by Kyle goddamn Wright — but it was a unit who at the very least knew what they could do. When Bryan Randall was young and inconsistent, they could run the ball and control the game. When Randall grew and was then replaced by Vick, they could lead a balanced effort and take advantage of young talent outside. It wasn't a bad way to start a career as a coordinator, until the wheels came off.

2006: 25.8 points/game (49th nationally, Vick gets kicked off the team, forcing a green Sean Glennon into action. Tech stumbles down the stretch, a five-game conference win streak overshadows the offense averaging just 21 points in that span.)

2007: 28.7 points/game (54th nationally, Beamer and Stinespring play hot potato with Glennon and Tyrod Taylor. It was mostly a mess, even when the box scores said it was a convincing win — see three non-offensive scores against Clemson.)

2008: 22.1 points/game (90th nationally, and it looked even worse. Somehow both Tyrod and Glennon regressed, and there seemed to be no hope of a turnaround.)

These three years have become Stinespring's entire legacy. Fans got cranky in '06, restless in '07, and unhinged in '08 to the point that it became a story surrounding the team. By the middle of 2008 the fan base was apoplectic and even members of the team began to publicly turn on their OC:

There's a point later in the interview where Sturdivant was asked if Stinespring should be fired and he simply answered, "that's a hard one". Needless to say, the senior linebacker wasn't impressed.

But no matter how bad things went during that stretch, the Hokies actually turned things around. They averaged nearly 32 points per game in 2009 (24th in the country, with Taylor and Ryan Williams running wild) and 34 points in 2010 (a Tyrod-led symphony that scored 39 a night in their final two months of the season).

And as a reward for his record-setting performance, Stiney was promptly demoted. He lost his coordinator title two years later and left upon Beamer's retirement, 25 years after he first took a job in Blacksburg.