Hokies Have to Halt Wildcats' No. 3 Rushing Offense 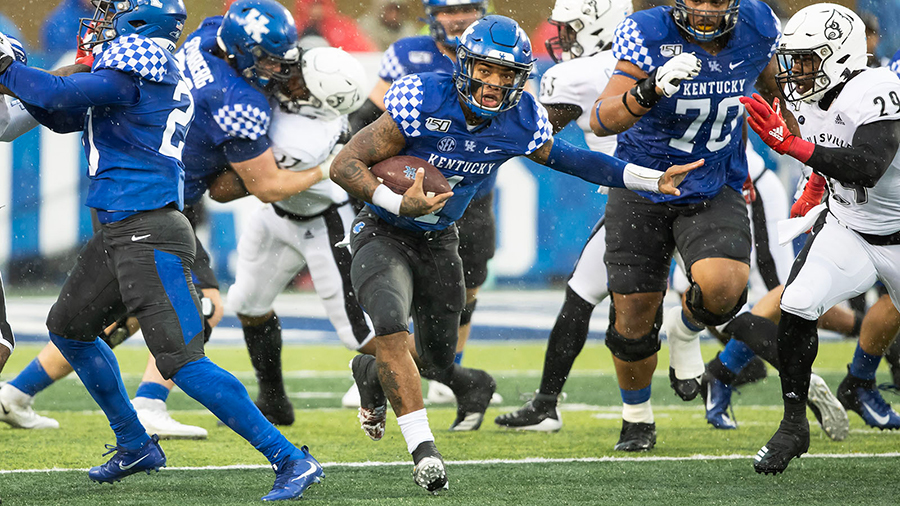 The Hokies' Belk Bowl matchup took a backseat in the newscycle to the significant turnover of the Virginia Tech coaching staff. However, Kentucky presents a really difficult matchup for a Tech team in the midst of a major transition. After a 17-13 loss to Tennessee, the Wildcats found themselves sitting at 4-5 and in danger of missing a bowl game. On the back of a physical, multi-dimensional running game, the Wildcats finished the season with three consecutive wins, including an absolute demolition of ACC rival Louisville. The Wildcats have three outstanding tailbacks and the best run blocking offensive line I have watched on film of all Virginia Tech's opponents this season. Quarterback Lynn Bowden Jr. (No. 1, JR, 6-1, 199) is a lethal running threat and pressures the defensive front seven at all angles. After struggling to contain Bryce Perkins in the Commonwealth Cup, Bud Foster's final game will come against a quarterback who is even more dangerous on the ground. Moreover, he has dynamic options to hand the ball off to if the Hokies focus too much on corralling him.

Extra Bodies at the Point of Attack

Kentucky runs the football (43.17 attempts per game, No. 22 nationally). Four runners have 65 or more carries, all average over 5.45 yards per carry, and each possess big play explosiveness with a run for over 60 yards to their credit. As a team, Kentucky averages an extremely efficient 6.36 yards per carry (No. 3). In a juxtaposition, the Wildcats find success on the ground without much of a viable passing game (117.1 passing yards per game, 126th). Bowden tops all Kentucky receivers in yards and receptions, and now he's behind center. Bowden has completed only 46.8% of passes (29 of 62), for a paltry 5.3 yards per attempt. Defenses know the Wildcats plan to run the football, and they manage to do so successfully anyway.

Since Bowden took the reins at quarterback midway through the season, Kentucky has built its running game around his running ability and figuring out how to get extra bodies at the point of attack.

From this look, Kentucky puts tremendous strain on the Volunteers' defensive front. Bowden serves as a run threat on a designed quarterback powers to either side. Rodriguez can run an outside zone to the left with Rigg as a lead blocker and Bowden holding backside contain. Many of their runs feature three potential runners. Instead, Kentucky runs a counter trey. Rigg fakes a block to his left, and then pulls back across the formation to the right as a lead blocker for Smoke.

The Hokies' d-line usually slants to the step of the offensive line. Right tackle Darian Kinnard (No. 70, SO, 6-5, 324) blocks down. The front-side defensive end, Darrell Taylor (No. 19), slants inside and then spills the kick out block of the pulling left guard, Logan Stenberg (No. 71, SR, 6-6, 322). Linebacker Henry To'o To'o (No. 11) fills the gap outside of Taylor, only to get sealed inside by Rodriguez and then finished off by Rigg. Safety Jaylen McCollough (No. 22) bites on the counter action by Rigg and takes a false step to his right, instead of flying up on the outside edge of To'o To'o. However, even if McCollough was in the right position, Tennessee only had one defender for each blocker at the point of attack and didn't have a free hitter. The closest defender was linebacker Daniel Bituli (No. 35) and he had to account for the run fake to his side.

This next play demonstrates why McCollough and Bituli were slow to react. From a similar formation, Kentucky ran a split zone back to the boundary.