By the (Advanced) Numbers: Give Me Liberty or Give Me Death

Fourth down conversions might tell the story of Hokies-Flames, and watch out for a game-changing kick return too.

By FEI's game splits, it was the second highest available yards percentage given up by the Hokies this season and the second worst defensive contribution to the final score, both falling short of the marks set by North Carolina. But the eye test showed the defense played better than earlier in the season, and certainly one poorly defended play at the end of the first half skewed those results significantly.

Additionally, Louisville has a pretty good offense — the second best the Hokies have faced this season according to FPI's offensive efficiency metric. It was a game that pitted two pretty effective offenses against two pretty ineffective defenses, and if you thought it was fun I have great news about Virginia Tech's next opponent, Liberty University.

But wait, there's more! Both schools are known for hiring sleazy head coaches that any school with ethics wouldn't touch, which is how those coaches end up needing entries on their Wikipedia pages titled things like "Scandals and resignation" and "Public apologies". Note both of those plural nouns. 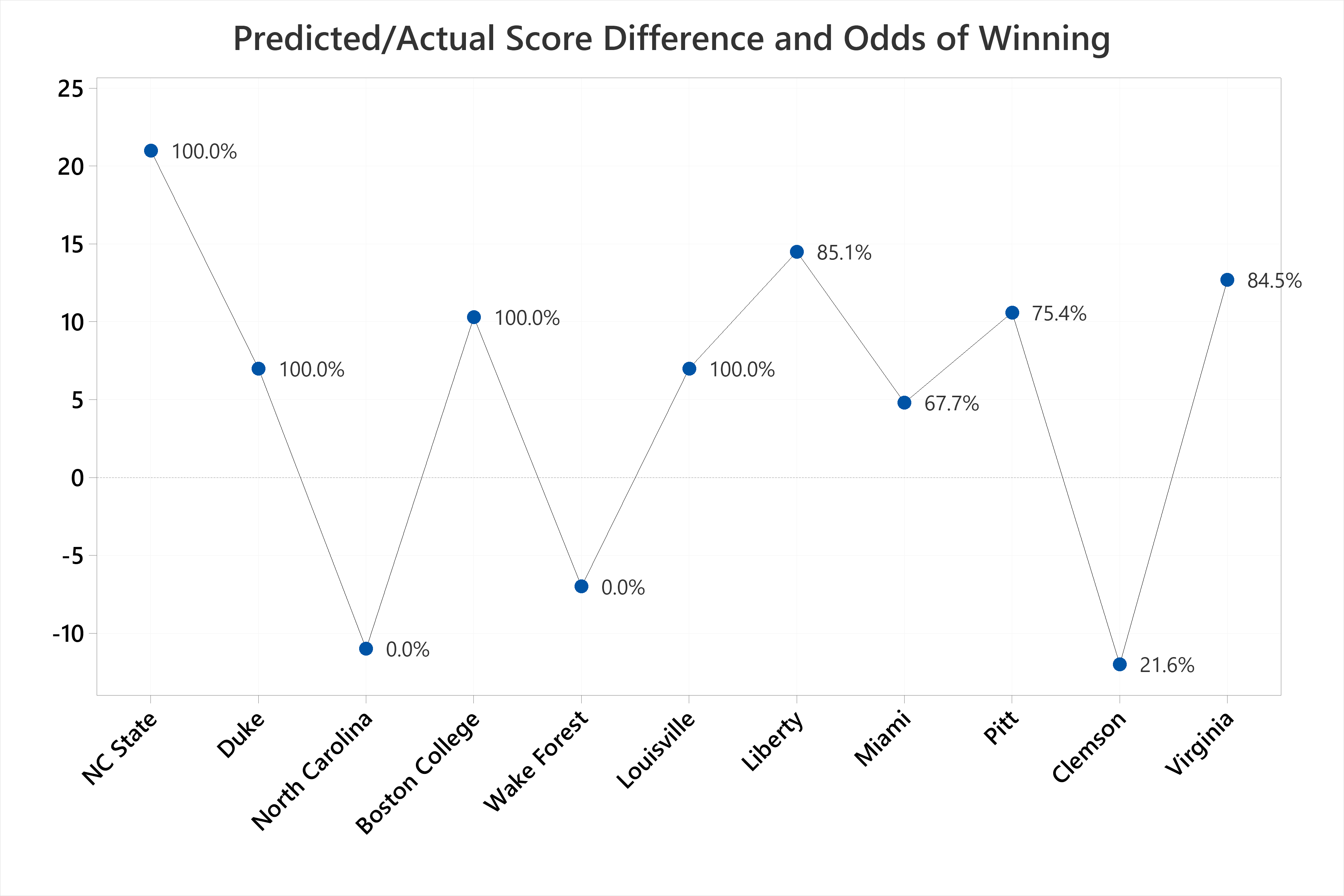 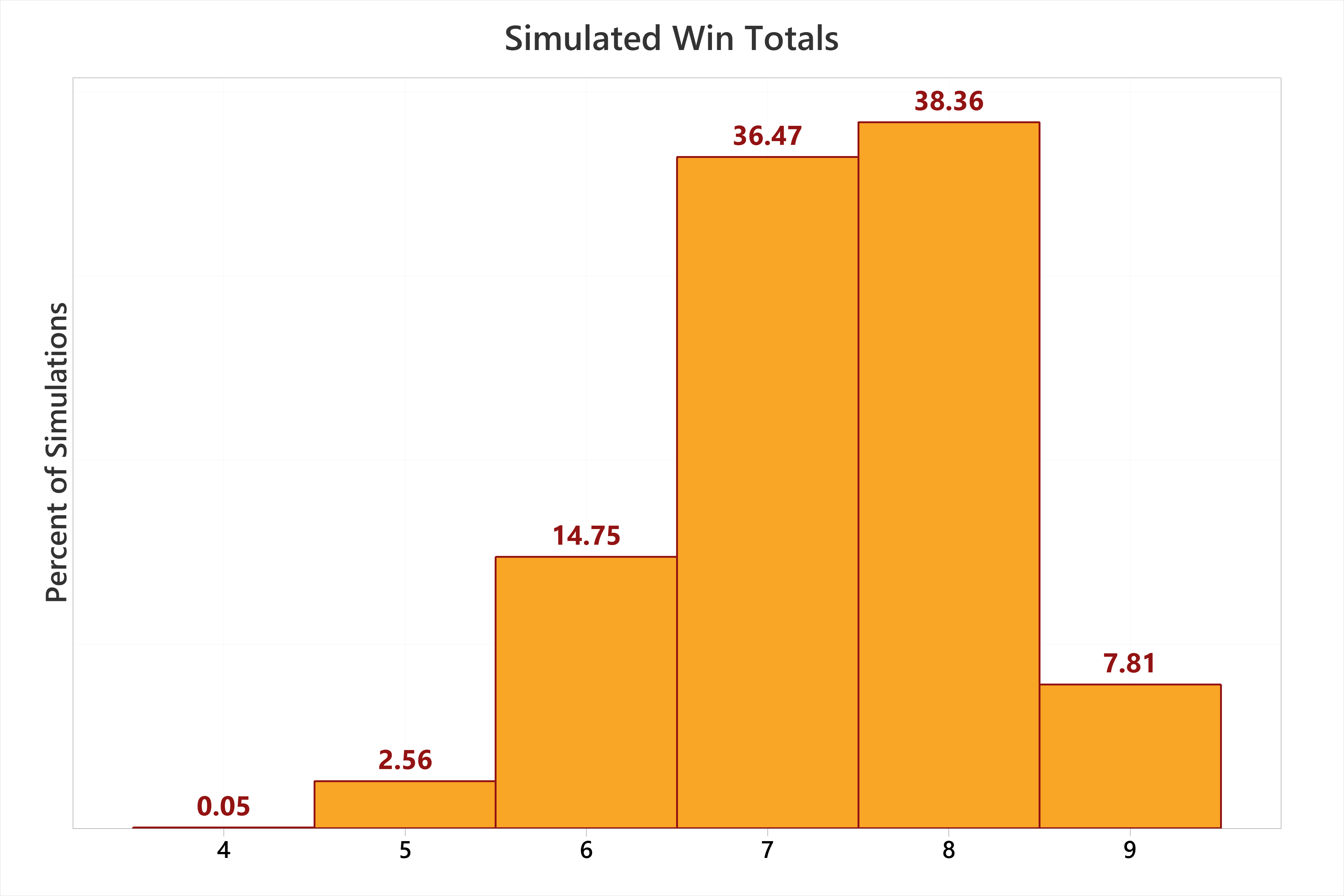 The Hokies are up to a 46% chance of 8 or 9 wins, the latter of which would clearly be a fairly successful season and depending on your expectations, perhaps the former. But there's also about a 1 in 6 chance of 6 wins or less, and only those with the thickest maroon colored classes could spin that into a successful season. 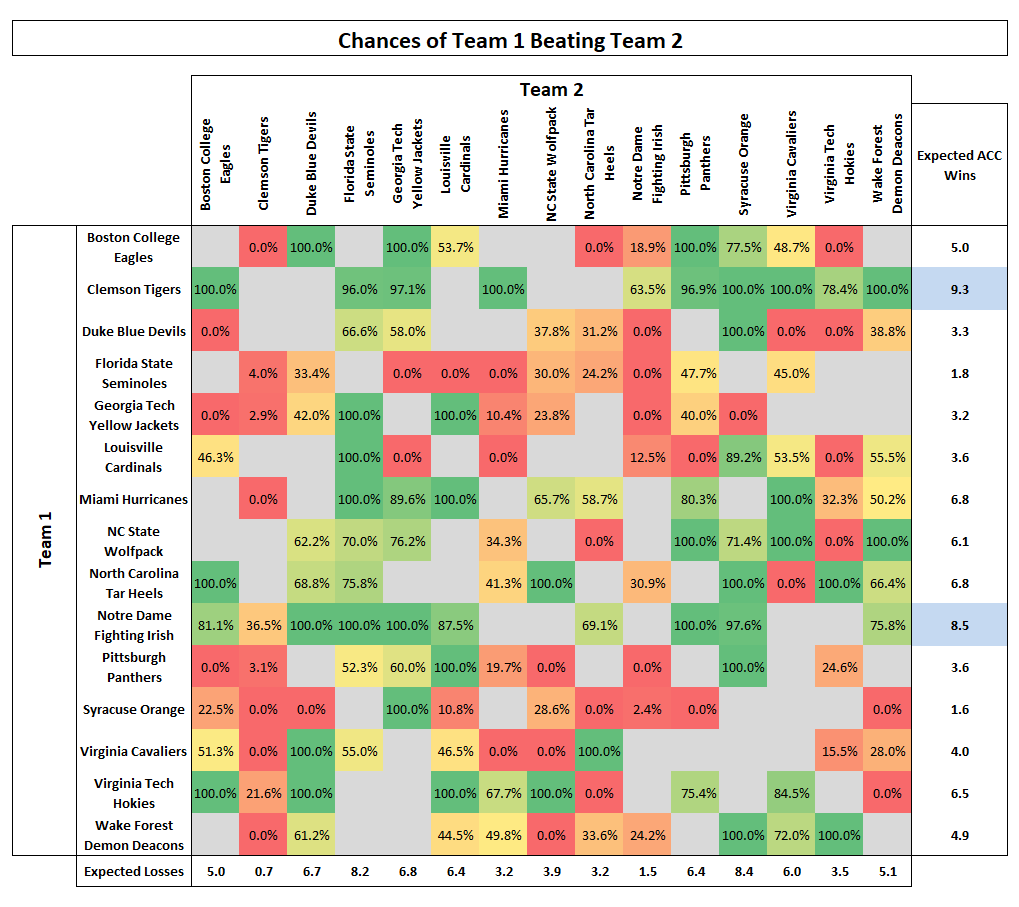 It is starting to look like an ACCCG featuring anyone other than Clemson and Notre Dame would be a big surprise -—the second place of those two, Notre Dame, is projected a full 1.7 wins above the third teams. That third tier of teams now clearly includes Virginia Tech again along with Miami and UNC, and arguably NC State as well. And despite winning a shootout against UNC, Virginia is projected to finish a mere 4-6.

Not exactly leading the nation but close...among teams that have played at least 5 games, only Georgia has a higher kickoff return average without scoring a touchdown. The 5 others with a higher average have all housed at least one return, and among the next 20 on the list, only 3 have scored.

I'm not entirely sure exactly what to make of that, other than it's early in the season so many of the top teams have few returns and that one or two that scored are skewing the average high for those teams and it will gradually drop down. Maybe that is the case — that TDs have a significant luck factor and those plays don't represent their true return ability.

Or maybe the more significant factor is skill, and teams that average high return yards should expect to score a couple of times during the season. If that's the case, Herbert is due any game now to finally break free and there is blood in the water: Liberty ranks 98th out of 100 teams in opponent kickoff returns per game at 5.3 thanks to a high scoring offense and one of the lowest touchback percentages in the nation, and is 66th in YPR.

To recap, Khalil Herbert is a huge threat for a kickoff return TD and is facing one of the worst teams in the country at allowing returns while simultaneously performing poorly at stopping them. You heard it on BTAN! 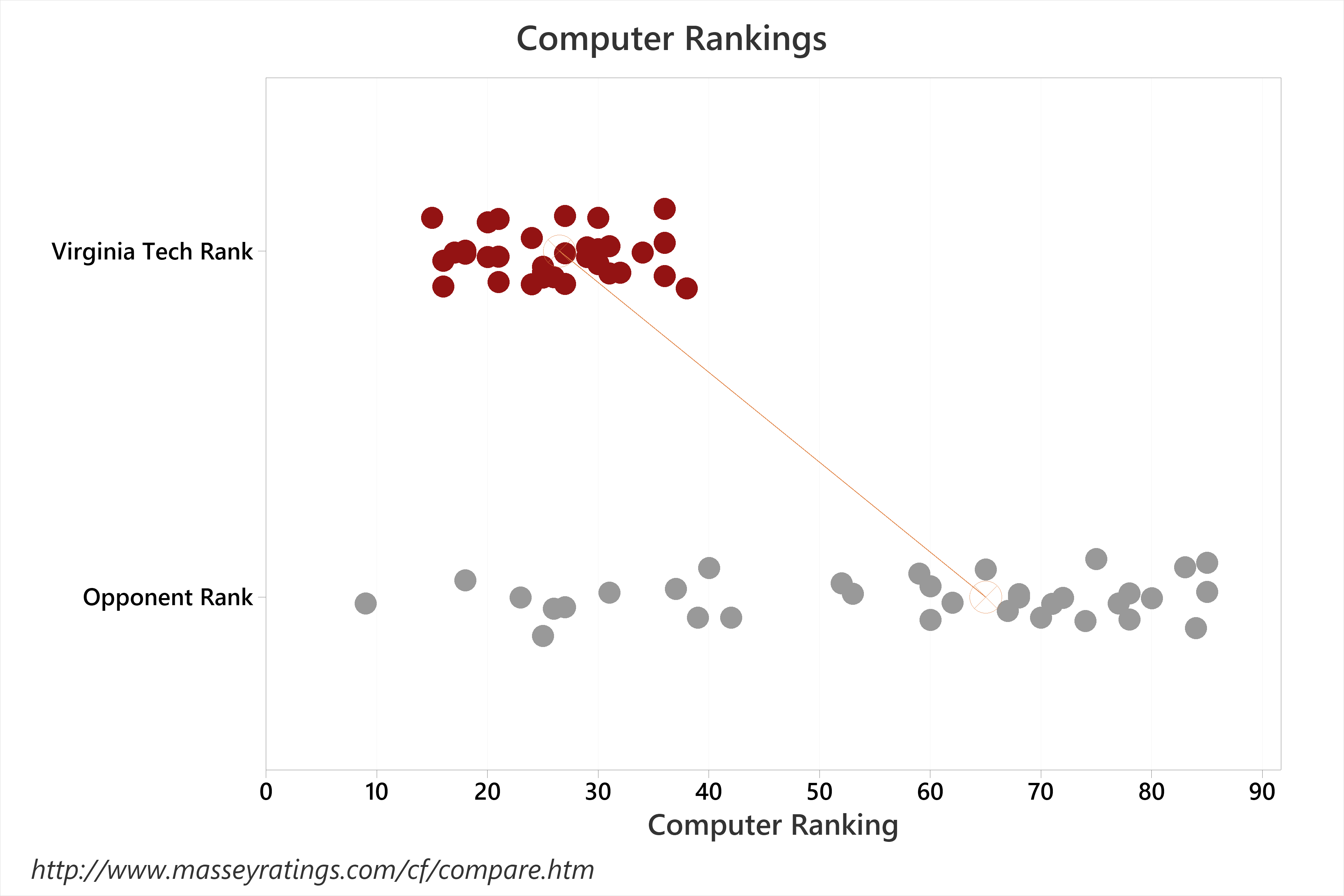 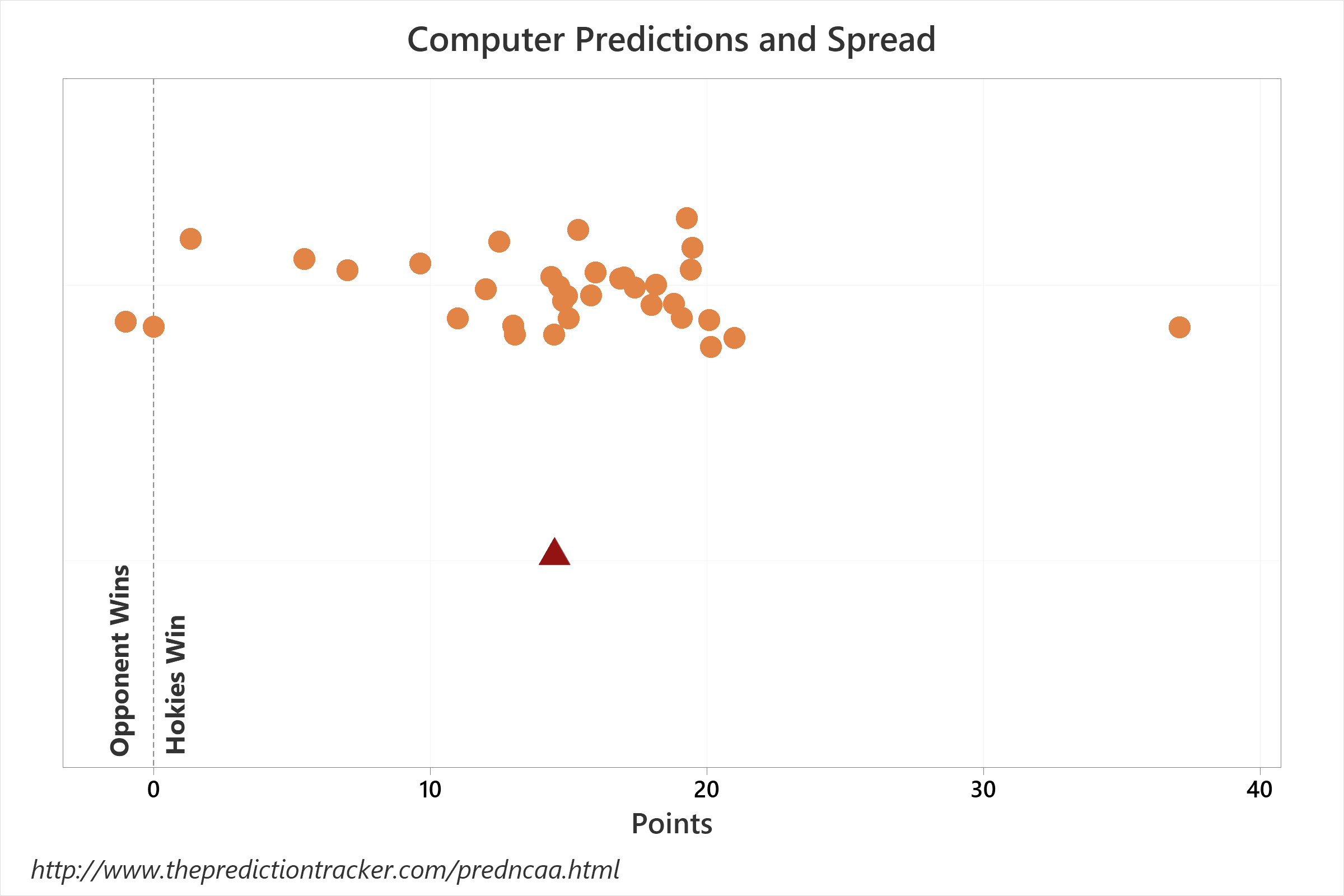 There are computer rating systems that are strictly based on W-L, and other (more accurate ones) that utilize margin of victory or efficiency. As an undefeated team, the former have rewarded Liberty with pretty good rankings but as a whole, it's safe to say there is significant disagreement between computers and human polls, which have absurdly ranked Liberty No. 25 this week.

There are plenty of problems with human rankings, and I think the CFP committee has actually handled this better than traditional polls, but to me the most fundamental flaw is that the polls don't provide clarity on whether they are intended to reflect performance to date or expected performance moving forward. For example, suppose Clemson struggles on offense against Notre Dame this weekend without Trevor Lawrence, and lose by three. Should Notre Dame jump Clemson because their resume is now better and includes the head to head win, or should Clemson stay ahead as they then have the top quarterback in the country back and would be favored against Notre Dame?

I'm not saying there is necessarily a right answer, but it would be great if everyone could just agree on which one we are pursuing. Instead those that rank the teams try to walk the line and do mental gymnastics to accomplish both. Such a situation gets reflected if, say, the No. 8 team in the country loses by 3 to the No. 3 team in the country. By estimated future performance, that was an expected result and they should likely stay put but by resume they often get bumped a few spots. Clarifying the goal would probably make that much easier.

In any event, most computer ratings exist to be predictive of future results, not a resume on past results (although obviously those inform future results). And by average computer rating, Liberty is something like the 50th best team in the country, not the 25th. The comparison in the intro is a great illustration of this — by computer rating Liberty is essentially Louisville, but as 2-4 no one would consider ranking Louisville while Liberty suddenly shows up in the top 25.

Now it's up to Virginia Tech to expose the Flames as not belonging. The odds of a 14.5-point favorite winning is 85.1%. 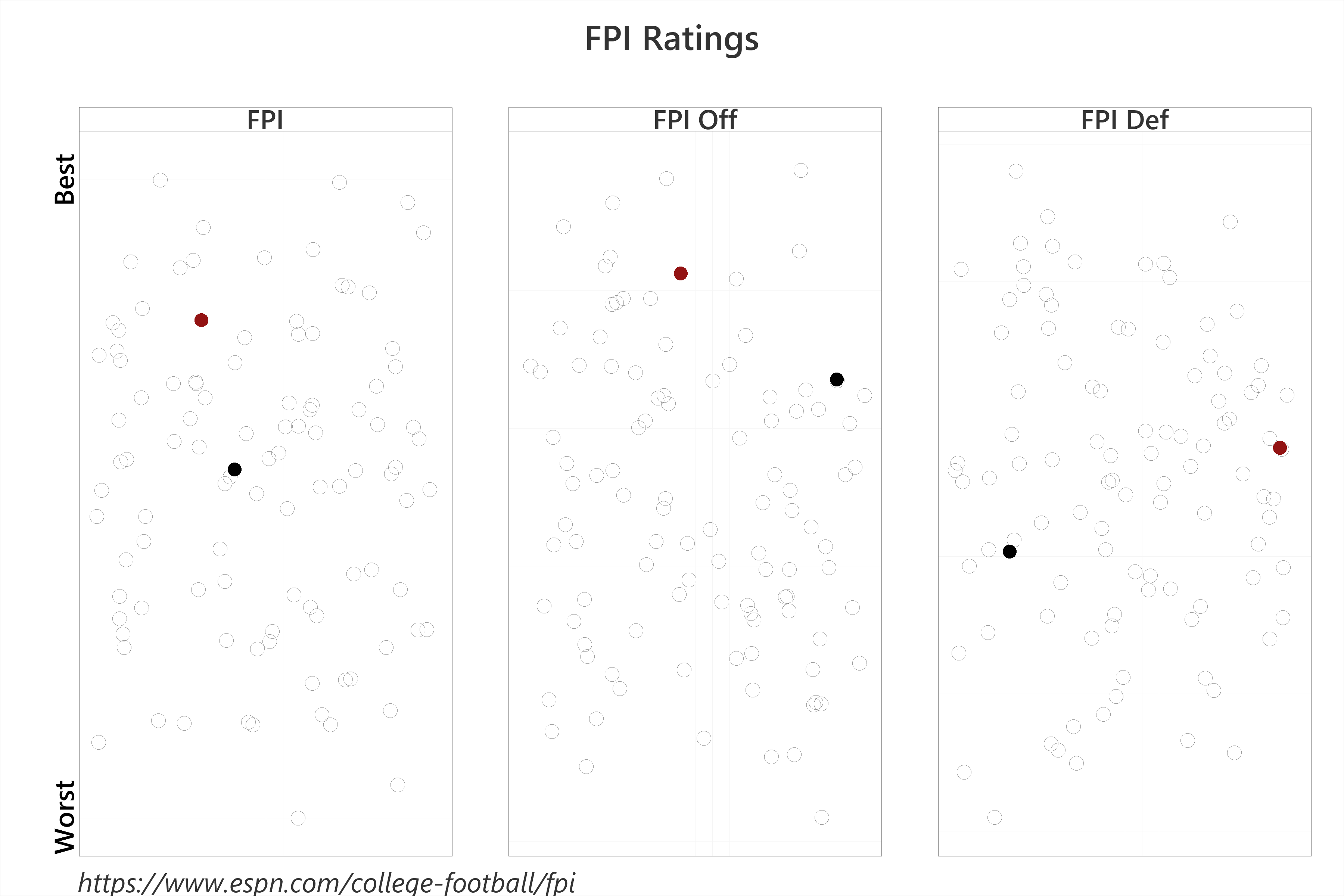 I'm not trying to make the case that everyone should all jump for joy at Justin Fuente's performance by any means, but when he was hired many drooled at the idea of having an offense with the effectiveness of Memphis'. Well 2015 Memphis had an FPI offensive efficiency that ranked 25th, while 2020 Virginia Tech is ranked 8th.

The problem is, Hokie Nation thought it would be paired with the 2007 Virginia Tech defense, not the 2015 Memphis one. But still, try to enjoy this show while it lasts.

The Flames are 21st nationally in rushing play percentage at 60.74% and it's no wonder given the abilities of their quarterback and running back:

As was the case against Louisville, this one is likely to be somewhat of a shootout characterized more by how many times each time got stopped rather than how many times they scored. Among teams that have played at least 5 games, Liberty and Virginia Tech are tied for 3rd nationally in 4th down conversion percentage at 83.33%, but Liberty has attempted twice as many (12) as Tech (6).

With both offenses likely moving the ball consistently, expect both to attempt 4th down conversions that will likely be the difference maker as each tries to avoid giving the ball to the other. Whichever team converts more 4th down plays is likely to turn those sustained drives into points, and the Hokies' margin starts to get thin if they are losing that battle. If the Flames convert more than one of them the Hokies might be in trouble and this game could become more UNC than Louisville.

Something about this game just feels inevitable that Liberty will pull off the upset. It's easy to not trust Tech's defense, and an opposing quarterback that is a great runner just doesn't feel very good. I think it's going to be a frustrating game, even as we watch the offense work its will against the Flames. Liberty covers the spread, but a Hokie kickoff return for a touchdown is the difference maker.

Just noticed the guy with the sword bears a passing resemblance to one Jerry Falwell Jr. Fitting.

Joel when he is putting these together.....

There are hopeful signs that the defense is coming around. The team seems to be getting healthier each week and players that have been out are getting back into game shape. Hokies win (but I have to admit I have my fingers crossed behind my back).
Let's go

Hopefully liberty is all smoke and mirrors and we pull the upset. Need something for our moral victory case and a ranked win would be nice...

We've favored. Wouldn't be an upset :)

I think there are a lot of overrated non-p5 teams this cycle due to so little conference cross over. I think the talent difference between the two teams will show, even by our defense.

This team has given me no reason to feel confident, but it's still Liberty. Fuck em. Offense rolls to a comfortable 49-20 victory.

The real question, which Joel/BTAN sets up nicely here, is: will Herbert amass 300 or more all-purpose yards?

I mean, Herbert averages 31.8 YPR on kickoffs and Liberty averages 5.3 opponent returns a game. So unless Liberty decided to squib kick or just intentionally kick it out of bounds, you'd expect 169 yards right there.

Then he averages 134 rush yards per game and another 19 receiving. Add it all up, and you're at 322 just using averages.

But Liberty has a lower defensive efficiency than any team the Hokies have played except for Louisville (and they're basically tied) so it's not unreasonable to think he would easily clear 300. To me the biggest threat to that would be the potential for Liberty to read BTAN, realize they would be crazy to let Herbert return a kick, and simply avoid the returns at the expense of field position.

I would hope that a D1 coaching staff with Sun Belt Independent-and-not-named-Notre-Dame level talent would know to avoid kicking to Herbert without having to read BTaN, but it is Liberty...

Intentionally kick out of bounds might be the best move. King is averaging 22 yards per return and that's off of teams kicking short to avoid Herbert.

We ALMOST had a KR TD, but Herbert's feet were a little too wide.

I am calling 52-10 for the good guys. Herbert is going to have to get his 300 yards catching and running. Not too many kickoffs returns for the Hokies in this game.

Is it too late to just go back and select death?

So were you predicting Alex Trebek's passing?