2,900-word, 11-play film review! How the Hokies leveraged an extra defender in the box and maximized Alan Tisdale's speed. Plus a look at a few costly defensive busts, analysis of how Tech beat soft coverage through the air, and a breakdown of the dagger run. 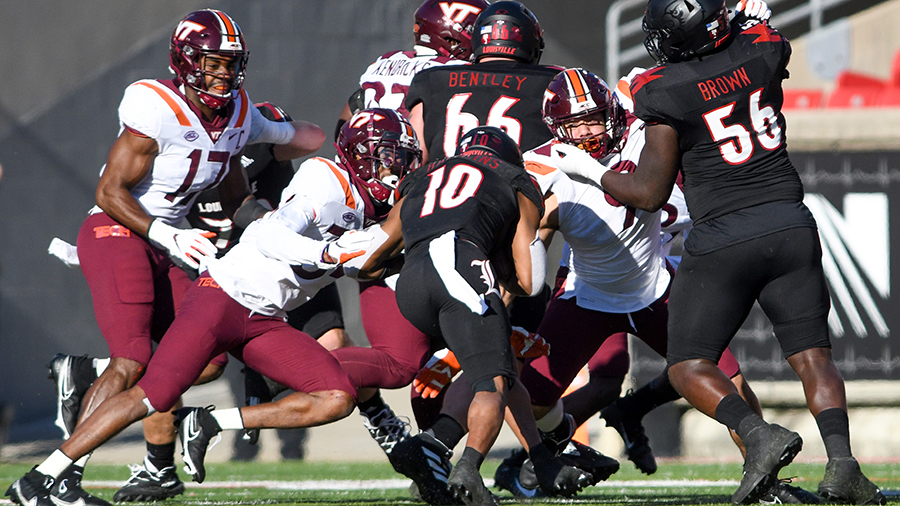 Two storylines permeated the pre-game discussion ahead of the Virginia Tech-Louisville matchup. Would Justin Fuente refocus his team after a lackluster effort against Wake Forest, and would Louisville have the horses to stop Tech's run attack given the former's COVID-related attrition on the defensive line?

I don't think anyone expected the Louisville running game, led by the explosive duo of Javian Hawkins and Malik Cunningham, would be completely shut down by a Tech defense for 29-and-a-half minutes in the first half. Outside of a couple of huge gaffes that allowed the Cardinals a chance to sneak back into the game, Tech's defense controlled the line of scrimmage for the first time all season. The Hokies, sparked in part by a much more energetic sideline and some interesting scheme adjustments, flew to the football like the Lunch Pail Defense of old.

The Man in the Box

After struggling to stop the run all season, the Hokies have now put together five consecutive quarters of solid run defense. With the inability to draw and occupy double teams up front, defensive coordinator Justin Hamilton has evolved his scheme to maximize the playmaking ability of his two rangiest defenders, Divine Deablo and Alan Tisdale.

Hamilton adjusted with an extra safety in the box. Throughout the first half, Deablo (and on occasion free safety Devin Taylor or whip Chamarri Conner) flexed down into the box and mirrored the H-Back and tight end, especially when Louisville aligned in a pistol formation.

Louisville runs the above sprint draw/isolation concept from a trips formation to the field-side. H-Back Marshon Ford (No. 83) motions across the formation and wants to isolate backer Alan Tisdale (No. 34). Left tackle Adonis Boone (No. 74) invites d-end Amaré Barno (No. 38) to rush up the field and then shields him to the outside. Left guard Caleb Chandler (No. 55) chips, climbs to the second-level and picks up Rayshard Ashby (No. 23). Center Cole Bentley (No. 66) reaches one-technique DT Mario Kendricks (No. 93) — which, if the Hokies want to take a step up on defense, can't continue to happen.

The blocking scheme doesn't account for Deablo mirroring Ford in the box. When Ford motions across, Deablo slides along with him as an unblocked hat to the playside. Even though every other front-six defender was blocked, Deablo was left one-on-one with dangerous tailback Javian Hawkins (No. 10). Deablo makes the tackle in the hole for a moderate gain.

On this stretch zone, Louisville went to 12-personnel (2 tight ends and a single running back).

Fuente Sees a Need for 'Drastic Improvement' on Depth as the Hokies Move Through Spring Practice
Alex Koma, 04/08/21
22 hours (81)