With a 'Thin' O-Line, Vice is Looking for Position Flexibility to Find the Hokies' Starting Five

Tech's OL coach is trying to build depth at the position this spring after some key departures. 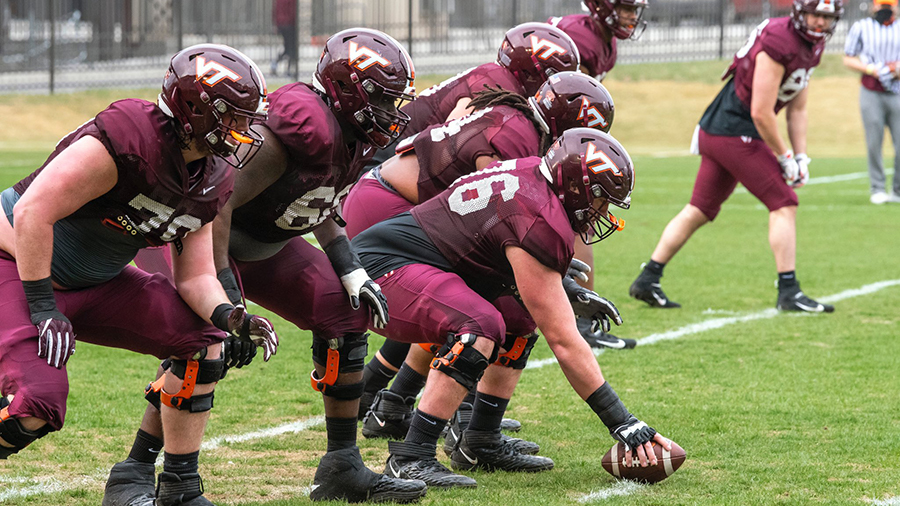 The way Hokies' OL coach Vance Vice sees it, he may not have a lot of depth for his position group, but he does have a lot of flexibility.

He thinks last year's starting center, Brock Hoffman, can play all five positions on the line if he needs to. He expects tackles Luke Tenuta and Silas Dzansi could play four of them, too. And Vice even believes that guard Lecitus Smith can do the same, though he might not know it yet.

"He thinks he can play two right now, but he'll find out he can play four by the time spring is over," Vice told reporters Wednesday.

That might seem like an intimidating challenge for a lineman (especially because Smith said he'd never even heard his coach make that vow before a reporter relayed that quote to him). But with Virginia Tech needing to rebuild its offensive line this spring in the wake of several key departures, Smith is game to give it a shot.

"I can play four and, if he needs me to, I'll play five," Smith said, noting that he already changed positions in his VT career after starting out as a tight end. "I want to show that I'm valuable and can play multiple positions...I'll learn how to snap that ball if you need me to. I accept the challenge and I'm definitely up for it."

That sort of attitude from a presumptive starter should make Vice's job a whole lot easier in spring practice. Between Christian Darrisaw heading to the NFL and Doug Nester and Bryan Hudson transferring elsewhere, he needs to build some serious depth on the line and figure out what a new-look starting five might be. If he can get creative in shifting around positions, that might ease the process substantially, especially given Vice's affinity for finding unusual line groupings in preseason practices.

"I was 10 deep last year, but we're probably more like six or seven deep right now," Vice said. "So we're thin in the room, but these guys, they're open to doing whatever we need to to get it done."