The Hokies' second group is giving Justin Fuente some heartburn as the spring nears its end. 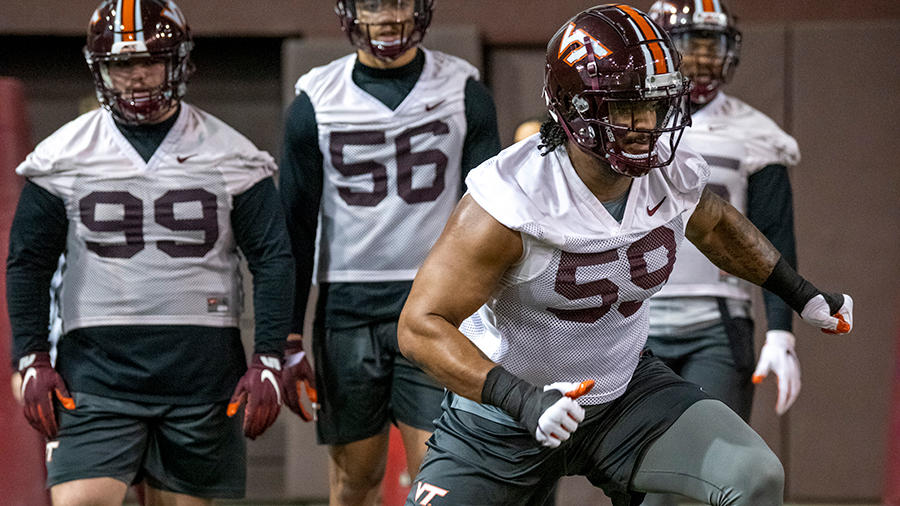 Jordan Williams runs a drill as Maxx Philpott and Justin Beadles look on. Justin Fuente believes such players lower on the depth chart need to step up this spring. [Virginia Tech Athletics]

Through 11 of Virginia Tech's 15 allotted practices this spring, Justin Fuente thinks his squad is a bit thin.

The Hokies have plenty of returning starters with potential to break out in 2021, like DE Amare Barno, or guys with some playing experience that are counting on a full season to show their true capabilities, like QB Braxton Burmeister. But Fuente says the trouble starts as you look a bit further down the depth chart.

"There's too big of a difference between the ones and the twos right now," Fuente told reporters Thursday. "It's just knowledge, execution. We have to move those two groups closer together for us to have a chance to have success. There's maybe one or two positions that the twos are close to the ones, but it's imperative for our team and our coaching staff that, for us to have the depth that we need, we've got to make dramatic improvement with the second huddles on both sides of the ball."

Fuente has been open about the detrimental effects of missing last year's spring practice (and running a highly unusual fall camp) on the team's younger players, in particular, and he certainly sees that at work this time around. There's Tech's cadre of true freshmen just getting their feet wet too, of course, but there are plenty of others without the same excuse.

"We've got some inexperienced guys who aren't true freshmen who have to take advantage of the rest of this spring," Fuente said. "And we as coaches need to do a good job of bringing those guys along and giving them a chance."