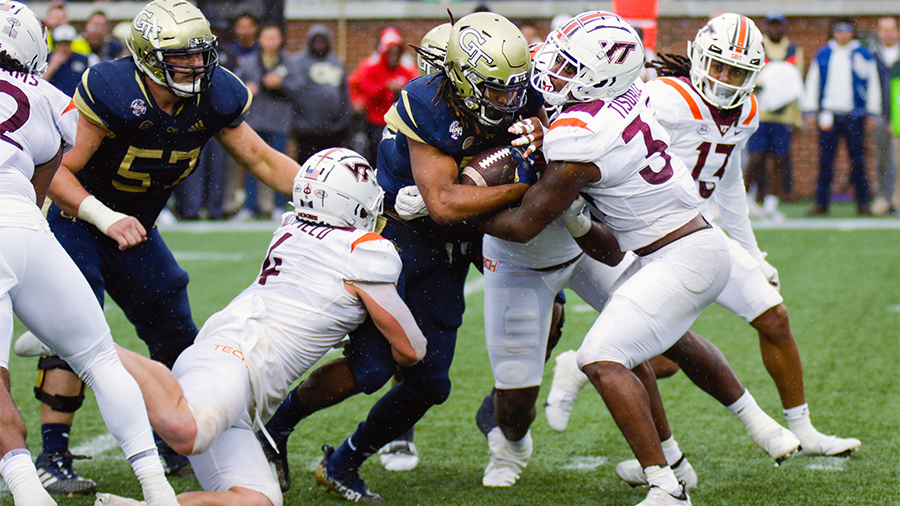 After a dreadful loss against Syracuse and loud whispers that Justin Fuente's time as Virginia Tech's head coach was coming to an end, the Hokies visited an equally erratic Georgia Tech program in front of a sparse Bobby Dodd Stadium. The dreadful atmosphere and the potential lame duck status of their season could have easily let a potent Yellow Jackets squad run rampant. However, to their credit the Hokies delivered a physical and emphatic performance. Virginia Tech won the battle in the trenches, and complemented the grinding work of Malachi Thomas and Raheem Blackshear with a record setting performance by Tre Turner and a crucial late game, fourth down stop to escape Atlanta with a victory.

There were positives abound. The power running game of the Hokies perpetuated breakdowns in Georgia Tech's coverage, creating ample room for Turner to break open down the field. Alan Tisdale played one of his best games as a Hokie after struggling badly against Syracuse. Amare Barno found ways to generate pass rush late in the game, and the Hokies special teams were solid across the board. While Thomas got the headlines, other players not expected to make important contributions this season, like Ny'Quee Hawkins, stepped in and delivered.

And yet, the victory felt a bit hollow. The Hokies once again sputtered in the red zone, settling for two late field goals when a touchdown would have put the game completely out of reach. There were catchable balls dropped, open receivers missed, and bad penalties to extend Georgia Tech drives. The Hokies were still plagued by procedure penalties in the red zone, and team captain Brock Hoffman, who was excellent for the most part, took dangerous liberties with the rulebook that could have derailed other scoring drives. The Hokies were fortunate that Georgia Tech suffered even more of these mental errors. In a battle of what are, at this moment, two bad football teams, Virginia Tech's will exceeded their sharpness in victory.

Perhaps the most positive outcome was Brad Cornelsen continuing to call quick-hitting interior runs, particularly on first down, to set up manageable down and distance situations. The results were tangible. The Virginia Tech offensive line played faster. The inside and split zone emphasis facilitated more effective play-action design. And by staying in good down and distance situations, Cornelsen limited the number of non-play action/screen drop back attempts for Braxton Burmeister (a situation in which he is very limited and the makeshift offensive line struggles to effectively protect him). Those three-yard hard runs early in the game became five- and six-yard gains as the game progressed. Thomas set the tone early.