Some young players stood out as the Hokies found a formula for defensive success late in a loss to Miami. Breaking their performances along with the defensive scheme down in this 11-play, 3,000-word film review. 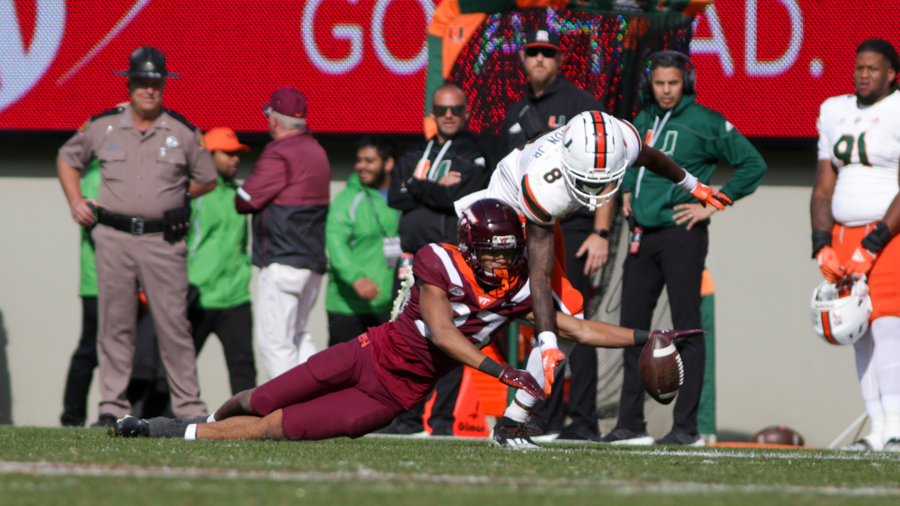 It was a long homecoming Saturday in Blacksburg. Miami had early success through the air and the Virginia Tech offense continued to sputter. As a writer and analyst, I struggled with how I wanted to cover this game, as the biggest story was, again, the complete inability of Tech's offense to create big plays with scheme, sustain blocks, or avoid self-inflicted wounds like penalties and drops. In every phase outside of individual players making plays when things broke down, the offense stunk, and there really wasn't anything in the tape that hasn't been beaten to death in this column already that made me want to spend much time focused on it.

Instead, I turned my attention to the evolution of Virginia Tech's defense. The defensive unit was completely decimated by North Carolina's pass attack and Pitt's zone stretch running game, and it appeared early that the Hurricanes would throw the ball at will against Tech's corners and linebackers. But after getting behind quickly, the Hokies inserted several young defensive backs and made coverage adjustments that largely stymied Miami in the second half and provided them a chance to win the game.

The story of this game early was Miami using multiple vertical routes to stretch the field and putting the Hokies safeties out of position to help. West Virginia, North Carolina, and Pitt all damaged Virginia Tech by catching the Hokies in a Cover 2 situation and running a vertical from the field seam. With free safety outside the hashes, MIKE linebacker Dax Hollifield was forced to run deep vertically against quality tight ends and wide receivers. Miami had an excellent tight end in Will Mallory.

Chris Marve adjusted by keeping his two safeties on the hash marks against verticals. This gave his linebackers some cover, but exposed Tech's corners. Watch this 2nd-and-17. Miami ran four verticals against the two deep, and the Hokies responded with a Cover 4 look.