Shooting Woes Hurt Hokies at Syracuse: A Classic Afternoon Against the 2-3 Zone

Virginia Tech had no answers for Syracuse's front-court and 2-3 zone that forced its worst shooting performance of the season. How do the Hokies bounce back vs. Notre Dame? 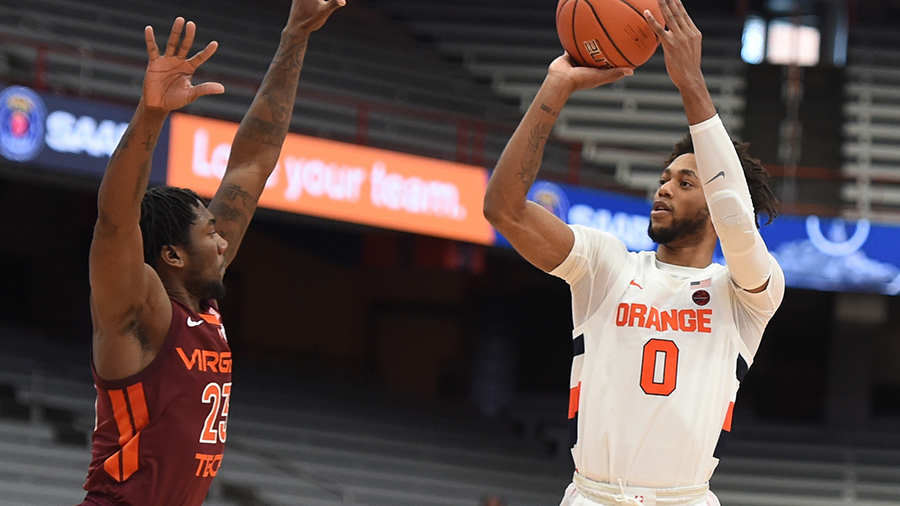 It was just one of those Carrier Dome trips for Virginia Tech. The No. 16 Hokies, who barely slipped by Wake Forest in their previous outing, were completely overrun in their 78-60 loss to the Orange on Saturday.

The Orange rebounded well (37-35), got to the foul line (18-22 FT) and scored 46 points in the paint in addition to shooting 51% from the floor. The size and athleticism was too much for the Hokies on both ends of the court and Tech, who trailed 40-34 at the intermission, couldn't gain any momentum in the second half.

"I thought our shots were really good," Virginia Tech guard Nahiem Alleyne said. "We got the right guys shooting in the right spots. They just didn't fall."

The sophomore scored 17 of his 20 points in the first half and carried the Hokies early, but he was very quiet in the latter stages of the game. Tyrece Radford and David N'Guessan each added ten points, but Tech didn't receive enough production from its most productive players to stay competitive.

Justyn Mutts (nine points) and Hunter Cattoor (six) contributed in spurts, but the Hokies' leading scorers of Keve Aluma (13.9 points per game) and Jalen Cone (10.9 ppg) combined for five points and hit just two of their 19 attempts from the floor.

The poor performance comes on the heels of Tech's unconventional win against Wake Forest, where it was a similar story: Radford (20 points), Cattoor (13) and N'Guessan led the way for the Hokies while Aluma and Cone made one of their combined ten shot attempts.

"I've got a lot of things sifting through my head about how I can get those two [Aluma and Cone] going," Virginia Tech head coach Mike Young said. "They're good basketball players and they'll look better against Notre Dame, I feel certain."

At the beginning of the season, many wondered who would take up the leading scorer role with the absence of Landers Nolley. Per KenPom.com, Nolley was 20th in the nation in percentage of possessions used last season and 29th in percentage of shots taken. The offense completely ran through him last year, and when he was off, so were the Hokies.

In ACC play last season, Nolley averaged 14.8 points per game. Out of the 20 conference games, he scored below that average 13 times. Tech only won three of them — at Syracuse, vs. Pitt and vs. Clemson.

There was a common theme in those three wins: at least two players scored in double figures, and one was always P.J. Horne. Cone had his coming out game against Syracuse (19 points) and Horne led the team in scoring in the other two games with 18 and 17, respectively.

In the last 12 games of the season, a stretch Tech won just two games, Nolley only scored more than his average twice: vs. Boston College and vs. Miami.

You're probably wondering what Nolley's performance last season has to do with this year's team, right?

Well, Tech's "go-to" scoring option this year has been Aluma. His first "quiet game" of the season was against Penn State, which was Tech's first loss. Against Louisville, the Hokies' second loss, Aluma tallied 11.

That famous 2-3 Syracuse zone got to him, though. He was almost non-existent on the majority of possessions, against the Orange, missing a few jumpers and a dunk. He was overshadowed by the Orange's frontcourt play and didn't have the impact on the boards as he did against Wake Forest (11 rebounds) either.

"As they [Syracuse] adjusted through the game, they're going to play him [Aluma] one-on-one and he just didn't score the ball," Young said. "I thought he did very well other than he went one for 10. He took good shots and he didn't get them home. ... He's had a couple of tough ones on the road. He'll bounce back on Wednesday."

Aluma having a quiet night isn't something Tech fans are used to, because he's having a heckuva year — potentially worthy of postseason ACC honors.

However, Tech didn't have much of an answer with Aluma struggling. Alleyne scored his share of points but Syracuse's defense was stifling.

Over a ten-minute stretch in the second half from 12:49 to 2:00, the Orange outscored Virginia Tech 31 to nine. The Hokies made two of 15 field goals in that frame and Syracuse's lead expanded from five to 25.

"We did a good job chasing their inside shots," Syracuse head coach Jim Boeheim said. "Aluma's a really good player and went 1-10. They had opportunities and I'm sure if we played them again, they'd convert a lot more of those shots. It was a really good overall defensive effort from everybody."

A noticeable talking point for the Hokies this season is their lack of a player that can constantly drive and slash their way to the basket, especially late in the shot clock. Tech doesn't have that go-to guy in the clutch that has the ball in his hands when the time ticks down. That could've been Cartier Diarra, but he opted out.

Tech does have a slew of shooters, but the Hokies struggle to create opportunities when the offense isn't running properly or the shot clock is winding down, and that was even more evident against Syracuse's veteran zone.

Does Tech need to establish a go-to player for possessions like that? Maybe, but a player could always morph into that role. There's still half of the conference slate on the table.

To couple with the poor offensive effort, Tech seemingly let the Orange score the ball in every which way in the second half, as SU shot 56% and assisted on seven of its 14 made baskets. Quincy Guerrier, Alan Griffin and Kadary Richmond led the way for Syracuse, scoring 31 of the Orange's 38 second half points.

"When they [Tech] put smaller guys in there to attack our zone, we got Quincy in there and we got down low," Boeheim said. "I thought we got those guys in good positions and we did a really good job finishing down there."

Guerrier (20 points, nine rebounds) and Griffin (15 points, 10 rebounds) were very impressive, while Marek Dolezaj was his usual self with 18 points and six boards. Point guard Joe Girard was efficient with the rock, finishing with five points, five rebounds, four assists and no turnovers.

The one Syracuse player who had a surprising game, however, was Richmond. While the other four start and average anywhere from 11 to 17 points per game, Richmond averages just under seven and plays about 21 minutes per game off the bench. He was really efficient on Saturday, scoring 13 points in 15 minutes and made five of six shots.

"He [Richmond] is huge for us," Dolezaj said. "I've never seen anyone that long and athletic. He's played a huge role for us, and he handles the ball really well. We need him to play like this until the end of the year."

Unfortunately for the Hokies, they won't see the Orange a second time this season to get revenge. Young & Co. do have plenty of takeaways and coaching points from playing maybe the best defensive team in the ACC, though, and will hope that the shooting slump from Aluma and Cone doesn't carry over to Notre Dame on Wednesday.

"We got really good looks," Mutts said. "Those guys can make those shots. We just didn't knock them down today."

Up Next: Notre Dame

In the first matchup between the Hokies and the Fighting Irish, Tech ran past Notre Dame 77-63 in Cassell Coliseum.

To flashback: Virginia Tech played its best defense of the year and held the Irish to 10.5% shooting from the floor in the second half, received 18 points from Cone and posted a +17 rebounding margin, including 16 offensive boards.

The Irish have won two consecutive games vs. Boston College (80-70) and at Miami (73-59) and enter Wednesday's matchup on a roll.

Five players scored in double figures for ND against BC, led by Dane Goodwin's 21 points. He scored 12 in Cassell against VT. Nate Laszewski was the star against the Canes, racking up a double-double with 16 points and 10 rebounds.

Tech is the better team but cold as of late, especially with Cone and Aluma shooting a combined three of 29 (10%) in the last two games.

"Keve looks hesitant and Jalen had great shots and didn't make them, but I'd take the same shots from him on Wednesday in South Bend and would feel very, very good about that," Young said. "They'll be fine."

Notre Dame isn't going to score 46 points in the paint like Syracuse did, but the Irish will rack up the points from the outside.

Tech will need to defend for 40 minutes in South Bend, crash the boards and not commit silly turnovers. If the Hokies can do that, as they did in the first meeting, offense will lead to defense and the shots will (should) eventually fall.

Great article on a Monday morning, thanks!

Unfortunately Fortunately for the Hokies, they won't see the Orange a second time this season...

A combination of things happened in this game but I put the offensive performance more on the Hokies rather then Syracuse really performing that well.

The Hokies clanged at least 4 dunks that were then rebounded by Syracuse, there were at least four additional point blank layups that they also missed.

They broke the 2-3 zone at the top of the key but failed to take advantage of a multitude of Syracuse mistakes. They also had wide open shots from a foot inside the free throw line that their unselfish play passed up too often. Sometimes looking for the extra pass is not a strength and this was one of those games.

David's point above about not having the guy who creates scoring off the dribble was a major factor. The pass into the top of the lane needed to go to someone that can create their way to the basket, shoot from the lane, or find the open man if the defender surges up the lane at them.

The best one suited for this is probably Radford. He hit the jumper a foot inside the free throw line near the end of the game and likely could have scored 18-20 points there if he had been the one receiving there most of the game.

The best one suited for this is probably Radford. He hit the jumper a foot inside the free throw line near the end of the game and likely could have scored 18-20 points there if he had been the one receiving there most of the game.

Sadly, it sounds like he won't be receiving passes there or anywhere the rest of the season for our team.

I wrote this before his suspension was announced

Understood. I just had to get that off my chest, it made me so sad for our team to hear about it.

Nice write up and sounds like a game I was glad I wasn't able to watch. This team is in a funk at the moment and aluma and cone need to be better in ACC play for us to win games especially with radford now being suspended. Radfords loss is going to be incredibly difficult to replace his rebounding and timely buckets are something I struggle to see anyone on the roster replace in this season.