Just like the Hokies have done all season, Mike Young’s crew bounced back from a loss with a victory, this time on senior day against the Demon Deacons. 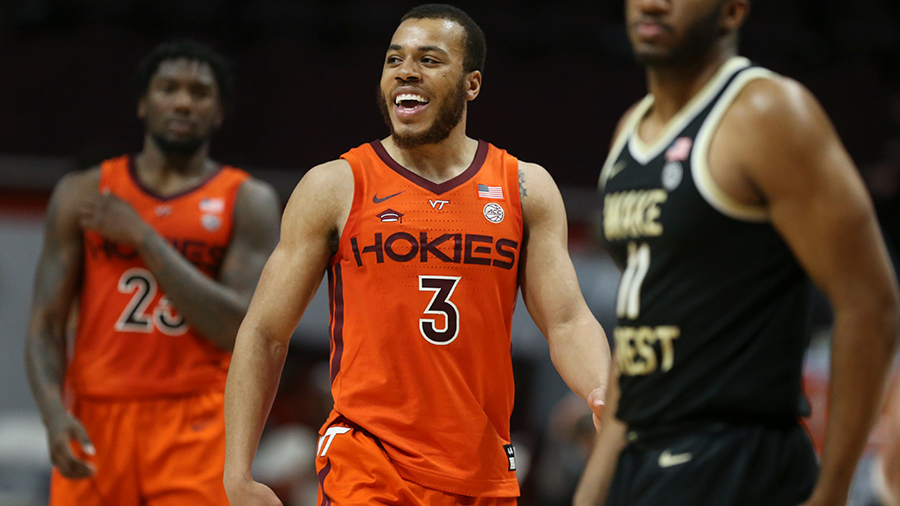 With six seconds to play in the first half, Justyn Mutts grabbed a rebound from a missed Wake Forest free throw and immediately found a streaking Joe Bamisile at midcourt.

The freshman exploded towards the basket and leaped from just inside the paint, slamming it home before the horn sounded.

The dunk was the icing on the cake in Virginia Tech's 49-point first half.

The Hokies led by 27 heading into intermission and didn't look back, defeating Wake Forest 84-46, Tech's greatest margin of victory to date against an ACC opponent.

"We haven't lost two in a row," Virginia Tech head coach Mike Young said. "I think that is the mark of a good team. ... We had a bounce in our step and connected defensively and played with the sense of urgency that I've come to expect from this team."

As good as Tech's offense was, the defense seemed to seal the game, forcing 18 turnovers and blocking 10 shots. The Hokies finished with 26 points off turnovers compared to Wake's three.

"We really needed to have the game defensively where we were dynamic," Young said. "Everything was contested. They felt our team and we talk about that a lot."

"Virginia Tech imposed its will both mentally and physically on our team," Wake Forest head coach Steve Forbes said. "They're playing for the NCAA Tournament and played like it.

"I don't mean this in a bad way, but they played violently. They played at a violent place. We were behind from the get-go. They played like a team that is playing for something important late in the season."

Though he didn't record another double-double, Keve Aluma put on another offensive show Saturday evening.

The six-foot-nine forward, who followed Mike Young from Wofford, never attempted a three-pointer in a Terriers' uniform.

Against the Demon Deacons, Aluma set a new career-high for most threes in a game with five, draining all of his attempts. He finished nine-of-11 from the floor en route to a 23-point game with eight rebounds.

"Someone asked me before the beginning of the season what I thought I saw myself averaging and I said 10 and 10," Aluma said. "I said I'd be happy with that, but I didn't really expect it. I'm just trying to help this team win."

Aluma's dominance this season has placed him in the ACC Player of the Year conversation, and rightfully so. He's recorded six double-doubles, including four in the past six games.

His play opened up opportunities for his teammates on Saturday, like Tyrece Radford, who was Tech's second-highest scorer with 15 points.

His second game back from indefinite suspension, Radford made five-of-seven field goal attempts and grabbed six boards. He also made his only two three-point attempts.

Nahiem Alleyne chimed in, too. The sophomore guard shot 50% from the floor, hitting four of his eight attempts on the way to 13 points. He had a well-rounded game, though, finishing with five points and five rebounds.

On senior day in Cassell Coliseum, a pair of veterans also got involved.

Wabissa Bede, the oldest player on the Hokies' roster, scored five points, including a triple, and dished out five assists, all while recording just one turnover.

Recruited to Blacksburg by Buzz Williams, Bede entered the transfer portal when Williams left for Texas A&M. When Young was hired in April of 2019, he had to re-recruit Bede.

Young convinced the point guard to stay, and Bede has been at the center of Young's foundation since.

"Wabissa is the most important player I've had in my brief period here," Young said. "He's an unbelievable teammate, he loves Virginia Tech. He is an easy person to play with, an easy person to coach. He's a lot of really good things."

It's easy to understand then why Young made an unexpected visit happen for his court leader. Young worked the phone behind the scenes to figure out how the Hokies could get Bede's mom in town from Massachusetts for Tech's senior celebration.

While Young and Bede were at Outback in Christiansburg earlier this week, Bede mentioned again to his coach he wished his mother could be in town for the game. As he said that, his mom, Emma Lougbo, came around the corner.

"She just came over and surprised me," Bede said. "We talk everyday or every other day, so it was weird... I was just happy seeing her."

Assuming the Hokies make the big dance, Bede will join his former teammates Justin Robinson and Ahmed Hill as the only three players to play in three NCAA Tournaments at Virginia Tech. He was a role player on Virginia Tech's 2018 tournament team and a starter for part of the 2019 season after Robinson's injury.

Yet after living in Blacksburg and playing for the Hokies for four seasons, there's a chance Bede could return to Virginia Tech for a fifth season.

The NCAA granted all players an extra year of eligibility, and it's unknown whether Bede will accept the offer and stay an extra season.

Young said he and Bede are mulling it over, and only time will tell. He also said he would love to give Bede his coaching start, whenever that may be.

The other graduating Tech player with a potential for an extra year of eligibility is forward Cordell Pemsl. The transfer from Iowa scored five points on senior day, and like Bede, is unsure of whether he'll return.

One thing he is confident about, however, is his decision to come to Virginia Tech. Though he missed a chunk of games due to a back injury from December to February, he's really appreciated his time in Blacksburg.

"When I got here in August, I knew I had a lot of work to put in to get to the point to be able to help this program move in the right direction," Pemsl said. "I felt like I took those necessary steps and did everything that I possibly could to help this team and lead this team.

"I've been through a lot in my time in the Big Ten and at the University of Iowa. I was just grateful that Coach Young, Coach [Chester] Frazier, Coach [Christian] Webster and Coach [Kevin] Giltner — everybody gave me the opportunity to be a Hokie and to lead some of these young guys and see what kind of noise we can make come March."

Aluma, Bede and Pemsl have all been integral pieces to this Virginia Tech team, despite their averages and playing time. Along with Mutts, the veterans have helped this team post a perfect 5-0 record in games after losses this season.

After the Hokies' loss to Georgia Tech on Tuesday, in a common refrain Young said his bunch would be better against the Demon Deacons.

And he was right, again.

"I know our team and I know the people in that locker room," Young said. "I know they were disappointed with themselves and disappointed with one another and determined to bounce back on Thursday and make it right. We had two good days of practice and we were good today, we played a good ball game."

Sitting at third in the ACC with two conference games remaining, Virginia Tech has its sights set on Wednesday's important contest against Louisville.

In the Jan. 16 contest with the Cardinals, a Hunter Cattoor heave fell short at the buzzer.

"Not all of the questions were answered [against Wake Forest]," Bede said. "We could've done a lot better. We just need to capitalize because Louisville is going to make the shots that Wake missed today. We have to be able to be on top of our game."

Good work David. With a blowout like this, there is not always sell that much to say. Nice to hear CMY or in some work to get Bede's mother in for the game.

Hell of a win. Hopefully these guys can ride the regained confidence against Papa Johns.

"We could've done a lot better." after a 84-46 in-conference win. That is what hungry sounds like.

I honestly dont think any team in the country can come off a covid pause and play at full strength, so i dont hold the GT loss against them. But it is incredible that we came back with such authority, doubly so when you consider that we won the first game against Wake by an anemic 4 points. This team going places, and it is a joy to watch.

After the aberration that was the GT game, it looks like the team is firing on all cylinders. Now if we get Cone back for Loserville everything will be set.

Mike Young said that he wouldn't be back this week. Hopefully for the ACC tournament.

That halftime score was almost the exact same as the final against NC State a few years ago that many people called one of the worst basketball games ever played. Remember that one? 47-24!

Its not the worst game ever played ... it didn't have UVA in it.

it will be a long time before I forget that game, haha. The NC State fans were too shocked to boo.

Both teams put up enough bricks in that game to rebuild Carter-Finley Stadium.

That one set NCAA records!

Even though we technically won, I try to forget it. Feels like a basketball version of the 0-0 Frank Beamer celebratory gif where we managed to win.

I am absolutely loving these Hokies and their heart this year. CMY is a great fit for this team and for our fan base. Keep grinding and doing the right things and it will all be worth it. GO HOKIES!

Another topic. This is a pic from this game of Carillion Court. I see these letters above the Burrus profile. What do they represent? Thanks for the help. 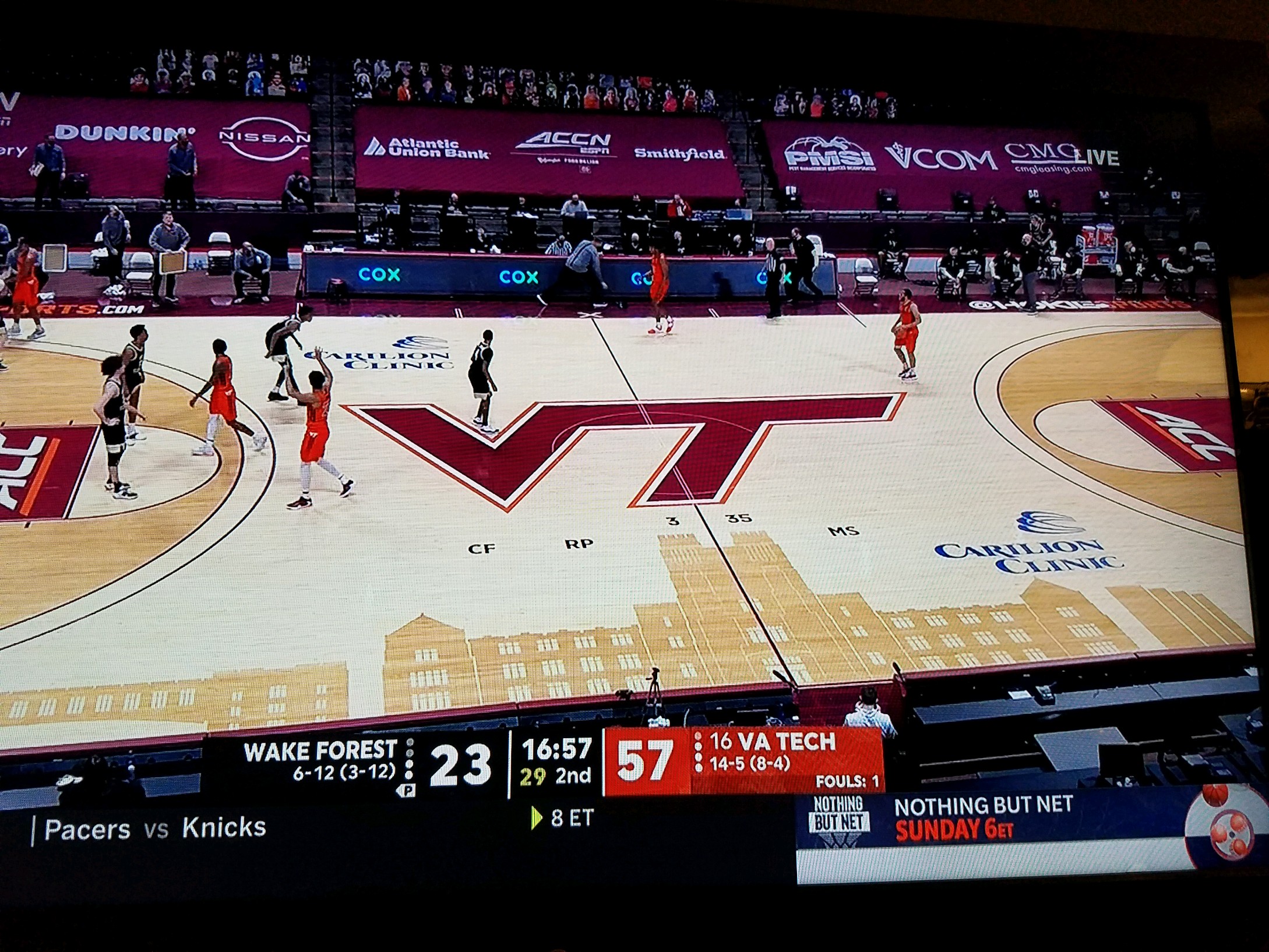 They are the numbers of Wabissa Bede, Cordell Pemsl, and the initials of the three senior managers recognized for Senior Day

That is awesome. Glad they did that. Stored for posterity for them.

I have to admit I missed that during the game.

I did too, but remembered them doing it from another season

I spent way too long trying to match up the initials to players before realizing it was for the managers.

I know this is a dead horse, but I'll beat it one more time.

We need to pick one building to put on the court. 3 is too many and too random.

Heck maybe its time to totally switch it up and have a mountains/meadow scene with a winding river, some kind of scene representing the NRV

Are they able to do this with overlays or paint, or is this a complete resurfacing job I wonder.