Virginia Tech couldn’t keep pace with North Carolina for 40 minutes in Thursday’s ACC Tournament quarterfinal loss, bowing out in the second half. 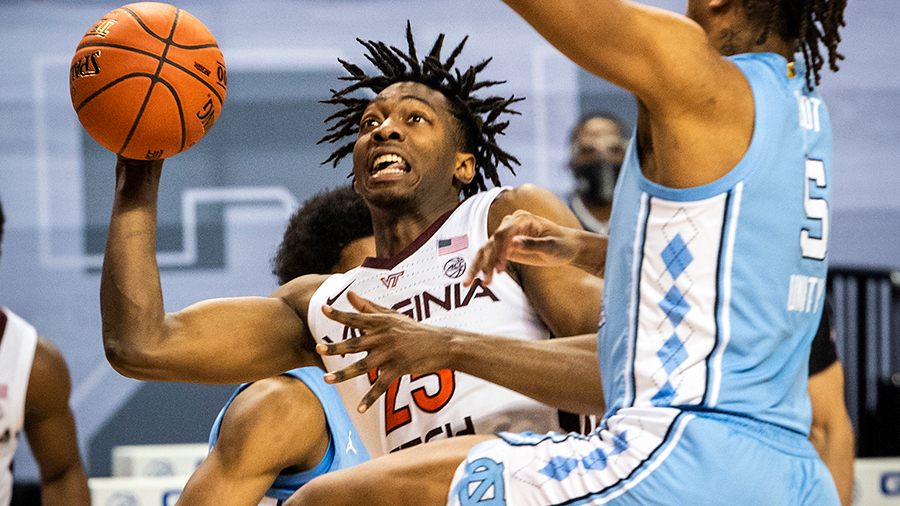 Trailing by four with ten minutes to go, Hunter Cattoor slowly walked the ball up to midcourt. In the middle of a stretch where he gave Wabissa Bede a breather at point guard, the Virginia Tech sophomore dribbled over the timeline and turned to his head coach, Mike Young.

Angling his body to shield the ball from North Carolina's RJ Davis, he looked up to receive the directions for the offense, switching his dribbling hand in the process.

Before Cattoor could blink, Davis reached around, poked the ball out and drove 47 feet to the rim before making a layup and drawing a foul.

Davis made his free throw to extend the Tar Heel lead to seven, and it felt like the wheels were slowly coming off the Hokies' wagon.

Though Justyn Mutts responded with a thunderous one-handed jam for the Hokies, two missed shots and a turnover on the next three possessions doomed Tech.

With Tech exhausted after trying to keep pace, Carolina's Day'Ron Sharpe grabbed an offensive rebound and put it back for an easy two points, before Armando Bacot corralled a board and did the same thing.

The quick 9-2 run North Carolina blew the game wide open and forced Mike Young to call a timeout, and Virginia Tech never found its footing again. The seventh-seeded Tar Heels ran away with the game from that point, winning 81-73 over the third-seeded Hokies.

"You combine some conditioning issues and then you're banging with... it's like they've got seven big people," Young said postgame. "That's hard. My guys did everything they could. We just didn't have quite enough to win it."

Coming off a 12-day pause, Young mentioned he was a bit nervous about his team's rustiness. It wasn't a factor in the first half, as the Hokies played exquisite defense, seemed to have an open look on every backdoor cut and led 35-32 at the intermission.

North Carolina came out of the locker room and made some clear adjustments, including effectively cutting off Tech's backdoor look. The Tar Heels, one of the best rebounding teams in the country, also cranked it on the boards.

After being held to just two offensive rebounds in the first half, UNC exploded for 12 in the second half. The Heels finished with 17 second chance points and 20 fast break points, two key factors that helped them pull away from the Hokies.

"But I just thought we're never going to win this thing, we're not going to get out of here playing the way we're playing, and I couldn't turn the light switch back on. I tried. They really tried to reverse course. But you know, not tonight."

Bacot led the way for the Tar Heels with a double-double of 17 and 13, and six of his rebounds came on the offensive glass. His size, along with Sharpe, Garrison Brooks and Walker Kessler, paired with the insane pace that Carolina gets up and down the floor at, was just too much for Virginia Tech to handle.

Justyn Mutts (24 points, 8 rebounds, 10-16 FG) and Tyrece Radford (20 points, 6 rebounds, 8-13 FG) led the Hokies in scoring and were very effective for most of the night. The duo had to pick up the slack with Second Team All-ACC nominee Keve Aluma scoring just once in the first half and finishing with nine points.

However, once UNC adjusted on both ends, there wasn't much Tech could do, especially with Aluma having an off-night.

"He [Aluma] looked a little spooked, and he's played against so many really good front-line defenders in our league," Young said. "He had some looks at it that he's had all year, and he looked a little hesitant. I'm not sure what to attribute that to."

Aluma couldn't find a rhythm on the offensive end, and even with Nahiem Alleyne draining four second half threes, it wasn't enough for the Hokies to hang on in Greensboro.

Though not the result Young & Co. wanted on Thursday night, the Hokies battled and scrapped against a hot squad. Tech now turns its attention to the NCAA Tournament and its first appearance under Mike Young.

After a rewarding season, in which Tech saw wins over ranked Villanova, Duke and Virginia teams, VT will finally get to celebrate with an NCAA Tournament bid on Sunday.

"These guys gave me everything in their tank," Young said. We came up against a North Carolina team that's playing pretty well at the right time.

"... I love my team and I love watching them play. We'll watch 15 minutes of [film], some good, some bad, and then Sunday we'll find out when, where and all that sort of thing as it pertains to Indianapolis. I told them, our sadness will be replaced with sheer joy here real soon when I find out what we're doing on Sunday."

Wish we had gotten the W, but it was good game. I feel like our guys really did give it 100%, and mostly executed a well designed game plan. Tough time of year to be out of competition play for so long.

he looked a little hesitant

The refs helped take Aluma out of the game...

Went better than I thought it might. This team is ahead of schedule but I sort of feel like the standings this year are very misleading. Regardless, this is one of the easiest teams to cheer for that I can remember.

That's because in a world full of blue bloods, everyone loves a Mutt.

Aluma has been like this all season long. Really great games paired with some really "hesitant" type of games. Hopefully he'll come back next season and provide some consistency down low.

Yeah I agree, despite the loss the guys played their guts out. I was talking to my old roommate on the phone and we both said (I'm gonna guess maybe 12-10 minutes left in the second half) that the legs were getting tired and that layoff was a killer. Hell even after that unc surge they kept clawing and givin' it hell. While the loss sucks, we still have our tourney streak going...🤷🏼‍♂️🤷🏼‍♂️....man the future is so bright for this program especially with this coach....he is not only a great coach but my lord he's one hell of a developer and relates so well with his players. Hey ya never know we could get hot and win a couple of tourney games. Either way what an outstanding season from a group picked to finish 11th....let's go!!!!

Big game by Mutts is an understatement. Dude played with some fire and Blue Ridge sized chip on his shoulder. He looked like he was trying to break unc's spirit by himself. If we had our normal game legs and he got a little help, I think we pull out the W and play among the trees again against FSU.