Analyzing the spring game film provided some indications of which defensive players may emerge for the Hokies in 2022. 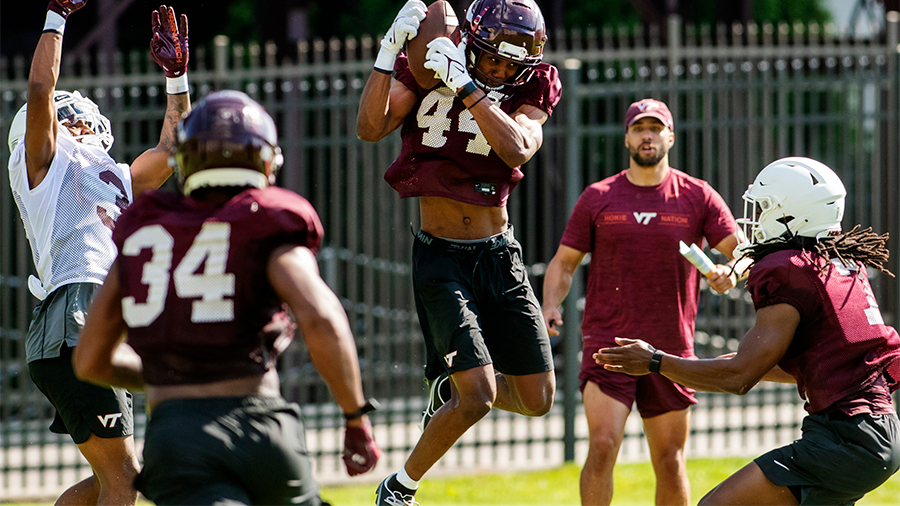 Virginia Tech football opened its 2022 fall camp with the air of a new car smell. Beat reporters attended the second practice, the coaches are engaging fans on social media, and players are emoting a sense of optimism that vanished early in 2021. A new coach means a clean slate, and opportunity for young players to grab repetitions away from veterans established under the previous regime.

With a summer of speculation in the books, I dug deeply into the spring game film to try and find some potential names that might make a move up the defensive depth chart. One possible clue was the allocation of defenders on the Maroon and White teams. The Maroon team featured most of the expected returning starters, while multi-year starters Chamarri Conner and Norell Pollard were put in the difficult position of carrying the White team. Outside of Conner and Pollard, the White team mostly consisted of lower upside veterans outside of promising young corner DJ Harvey and WILL linebacker Jaden Keller.

By the time the scrimmage ended, my tinfoil hat was picking up signals from Blacksburg. The Maroon team defense looked sound, with several impressive performances by young players and athletic veterans being asked to take on new responsibilities. Meanwhile, Pollard and Conner struggled to make an impact for the White team. Conner, featured more as a traditional NFL free safety, looked uncomfortable tackling in space and didn't show the range a defense needs from a safety with deep half or deep third coverage responsibilities. No defensive player has received more effusive praise from head coach Brent Pry through his first 8 months as coach. However, with a clean slate on the board the spring game film suggested that some key veterans could face pressure to keep their jobs in fall camp.

Both Nasir Peoples and Jalen Stroman, who started at boundary safety and field safety for Maroon, respectively, looked fluid and comfortable supporting the run and matching to receivers down the field. On this screen, the defense brought a six-man pressure from the field-side.

SAM linebacker Keonta Jenkins (No. 33) and MIKE linebacker Dax Hollifield (No. 4) blitz off the edge. It was Cover 1 behind the blitz. Stroman (No. 26) rotates up to match the slot receiver Tucker Holloway (No. 11) in coverage while Peoples (No. 5) rotates from the boundary into the deep middle of the field. WILL linebacker Alan Tisdale (No. 34) becomes the free hitter. With three receivers to the field-side, the defense was outnumbered at the point of attack.

However, Stroman takes on Holloway properly with outside leverage and forces the screen to Jadan Blue (No. 2) to bend back inside. Stroman keeps his feet moving and crosses Holloway's face to support the play instead of being driven back after completing his initial assignment, which has been woefully lacking Tech's secondary. Tisdale shows off the remarkable speed he brings to the tables and gets across to make the tackle before Blue can even cross the line of scrimmage.

The test for this coverage would be a fake screen and wheel, with Holloway potentially releasing on a vertical route after selling the block. Peoples would have to get over the top from his centerfield responsibilities. He wasn't tested in that way, so the jury is out. I have no doubts about how Peoples (or Tisdale) moved in their run defense responsibilities.