The Hokies added a veteran guard to their roster. Diarra dished on what made him pick Tech, his fit in Blacksburg and his NBA Draft status. 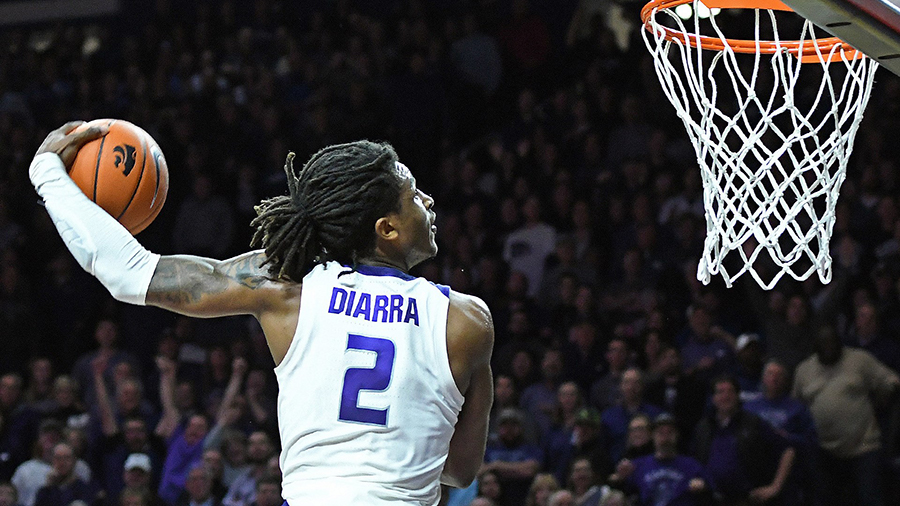 It was important that Kansas State transfer Cartier Diarra find the right fit. He has NBA aspirations and didn't want to squander his final season of eligibility on a bench. Even though COVID-19 prevented him from visiting potential suitors — usually a make or break part of the recruiting process — he did his research.

He flipped the script a bit, fired up some game film, and did some scouting of his own.

"I even watched how he coaches his team," said Diarra.

The "he" is Mike Young. Diarra, who committed to the Hokies on Wednesday, noted Young's encouraging courtside demeanor stood out.

"I like his mentality and mindset around it. He stays clapping and cheering for his team regardless of whether or not they make or miss a shot. I will excel in that, knowing myself, how I get down on myself when I miss a shot."

Familiarity with associate head coach Chester Frazier helped seal the deal too. Frazier joined Young's inaugural staff after a stint with K-State (2012-19), and recruited Diarra to the Wildcats.

"He's loyal," said Diarra. "He's easy to talk to. I don't think he'd fabricate anything to me. He told me about Coach Young, and how he coaches."

Even though his minutes oscillated down the stretch, the athletic 6-4 guard averaged 13.3 points, 3.8 rebounds and 4.2 assists per game for the Wildcats last season.

Virginia Tech ranked 14th overall nationally in 3-point attempts, and the freedom to take tough shots and play alongside high-percentage three-point shooters appealed to him too.

"I could fit well in that system and help that team win some games and make a run in the NCAA," said Diarra.

"The way they play defense [in the ACC], I have more driving lanes, more space, more one-on-ones. With also being surrounded by shooters, [Jalen] Cone shot 40 [45.7 percent] last year, a couple of players shot 40 from three last year. Me driving to the basket, [defenders] being scared to help in. If they do help in, that's a kick out, three, most likely going in. Or if they don't help out, I got a layup to the basket."

Of other schools with potential interest — Gonzaga, Seton Hall, Georgia — Diarra said, "None of them sounded as sweet as Virginia Tech."

He noted he noted he could play either guard spot for the Hokies, and in a pinch even played the three and four at K-State.

"He [Young] loves my game and what I bring to the table," said Diarra. "He felt like I definitely could have had a better year, for sure. We talk about even my assists and turnovers. My assist numbers were really high early in the year, they kind of went down, but my turnovers were way too high (led K-State with 3.2 per game). They were careless ones, they weren't forced ones, I could've avoided them. When it comes down to it, he admires how hard I play, my energy, everything I bring to the table. My goal is to be an all-around player, get rebounds, get steals."

Whether it's this year or next, he's also hoping NBA scouts love his game too. He will declare for the NBA draft. That might seem odd on the heels of a commitment announcement, but he wants to receive valuable feedback from the league, and get his name out there.

"If I had the opportunity to go," said Diarra. "I would definitely do it. That's a once in a lifetime chance. I don't think a lot of people turn down a chance to go to the NBA. What I expect to hear is, 'do some more work, holler at me next year'. Right now my plan is to come over there to V-Tech and try to win games."

Hopefully between Diarra, Radford, Aluma, and some of the freshmen, we'll see some more driving and scoring in the paint this season. Seems like we're going to have an exciting team to watch.

I spoke with him for almost 30 minutes last night. Before I even had a chance to ask him a question he interjected and asked me how everything was going because of COVID-19. I finished impressed with this thoughtfulness and how cerebral he was. First impression — he seems like a great culture fit for Young and the Hokies. And he's going to help immensely on the court as well.

Reading the bit on how he feels he can fit in alongside our shooters from deep gives the impression hes done a fair share of research and has paid alot of attention to details some might miss. Sounds like a good get from the portal.

Well, if he's cerebral, hes also got a high motor and is a first in last out kind of guy. Probably also a coaches son!

Seems like a good guy, I hope he makes it to the NBA...next year, after leading the Hokies on a deep run.

This sounds great but it seems weird that the Hokies won out over Gonzaga, Seton Hall and Georgia?

We thought Youngs biggest weakness might be his recruiting. With his coaching style and staff, it is actually getting to be a heck on an asset. Our incoming class looks great!

Young surrounded himself with assistant coaches who had experience at big schools because I think he felt the same way. I'm sure it pained him to leave some of his Wofford coaches behind, but sometimes you've gotta do what you've gotta do.

That's because we the big dawgz...oh wait...wrong sport?

Of other schools with potential interest — Gonzaga, Seton Hall, Georgia — Diarra said, "None of them sounded as sweet as Virginia Tech."

Is this what it feels like to be a big dog?

I was gonna say did we just out big dog the big dogs?😂

Basketball recruiting is a different animal because of the limited scholarships.

Glad to hear some things are still going forward during the crisis.

I like what Young did with the team last year. It's going to get better and better. The rebuild has begun.

Another misleading "scoop" from Jeff Goodman. A tale as old as time.

This guy sounds like knows what's up.. from his own +'s & -'s, his NBA chances, his impression of CMY, his fit with the Hokies system & current roster. Looking forward to seeing him on the court in Maroon & Orange.

Great interview with Cartier Diarra, sounds like a great fit, hopefully brings some leadership with those skills, this post made me happy, thank you

Film Evaluation: Mattheus Carroll is a Diamond at Defensive End for the Hokies
french60wasp, 06/02/20
5 hours (26)