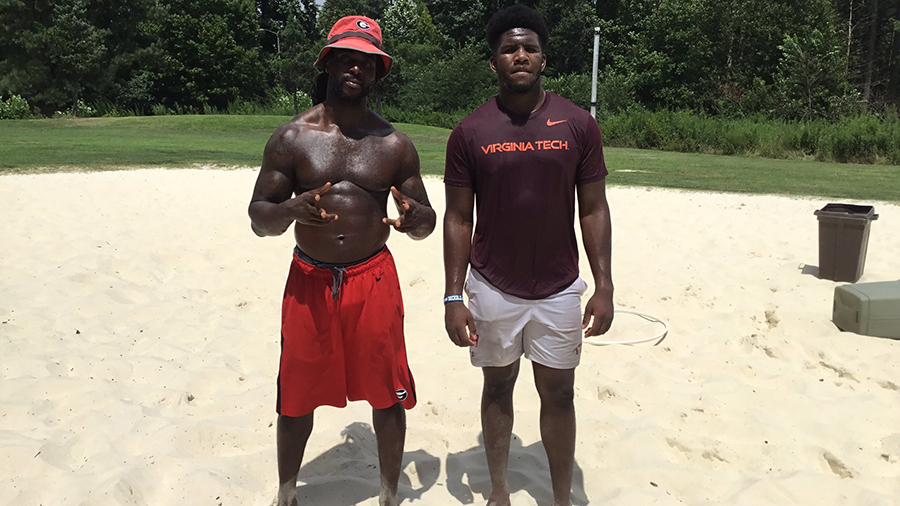 Nelson (right) and trainer Marcus Howard pose for a photo after a workout. [Marcus Howard, @Mhoward38]

It was a peachy Friday on the recruiting trail for the Hokies. Defensive end Cole Nelson opted for Virginia Tech over finalists Illinois and Indiana. The connection the Johns Creek HS (Georgia) product made with the d-line coaching duo of Bill Teerlinck and Darryl Tapp plus defensive coordinator Justin Hamilton helped put the Hokies over the top.

He noted it was a blessing to receive tutelage from not one, but two defensive line coaches.

"Coach Tapp, he played in the NFL, and then Coach Terrlink, he also coached in the NFL. So both of the coaches know exactly what they're talking about."

The planned business major made a family visit to Tech a few weeks ago, his only trip to campus, and was able to check out Pamplin College of Business, Lane Stadium and the football practice facilities.

Tech was also able to connect him with the business school's faculty and staff and that left an impression on him.

"They got me on a virtual visit and I was able to talk to a few people on the business side," said Nelson. "They gave me and my family a lot of information about the Pamplin School of Business."

Virginia Tech has certainly honed in on lengthy defensive ends that can get after the quarterback, and Nelson is no different. He mentioned an early role as pass rush specialist.

"They'll pick out one of the weakest links on the offensive line and I'm going to come in on third down situations," said Nelson.

"He's got an 80-inch wingspan, 80, 81, like 80-and-a-half, something ridiculous. His arms are so long, he's got the biggest hands I've ever seen in my life. I brought him out for track last year, when I took over the track program, his sophomore year. I brought him out for the discus thinking he's perfect body type, and he ends up making it on to our 4x1 team and being one of our faster kids. He's just a phenomenal athlete."

Nelson, who trains with former Georgia standout and NFL d-end Marcus Howard, has the range, physical gifts and athleticism to play with his hand in dirt or space. Johns Creek plays a multiple defensive scheme, 3-4 or 4-3, in which Nelson moves along the front and has either one- or two-gap responsibility.

"We usually put him to the field because he's so long, so quick," said Helmerich. "We expect him just to cut off that alley, the speed to the field, and be an edge-setter. He's pretty good at recovering. If he gets inside, he's got the speed to make it up and get back outside and set that edge."

"I'm able to stop any tackle or tight end from trying to zone block or reach block me," said Nelson.

As a junior on a senior-laden squad, Nelson earned captain's honors. That responsibility included a first for Helmerich.

"He came to us last year as a staff and said, 'Coach, we need to step it up with our after-practice punishments'. Some kids were getting out of line and he didn't think the coaches were taking care of it well enough," he said with a chuckle. "So he wanted to run it. Mid-season to the end of the year last he did our after-practice punishments, and ran that. The kids listened to him, and nobody said anything to him. Whether it's up-downs or extra running or whatever, he did it, stayed after practice every day, and ran that last year. I've never had a kid do that before. I've never seen any leadership like that before. He doesn't say much, but when he talks, people listen, kids listen."

That is the type of player that makes me proud to root for VT, whether they go in the first round or cheer on their teammates!

"He came to us last year as a staff and said, 'Coach, we need to step it up with our after-practice punishments'. Some kids were getting out of line and he didn't think the coaches were taking care of it well enough,"

Floored by this one. Love it.

Loved those quotes as well.

Fresh from the cutting room floor: Helmerich coached the Bosa brothers when he was defensive coordinator at St. Thomas Aquinas. There was a couple of times throughout our conversation that he likened Nelson to the pair. He really believes he has a very high upside. As far as a fit, he's exactly the hybrid DE that Tech's been targeting since TNT took over the DL.

A DE that's on the 4x100 relay team? Time to bring out my "let the man return punts!" drum. It's gotten dusty since Dadi graduated.

His arms are so long, he's got the biggest hands I've ever seen in my life.

The most important aspect is...will Virginia Tech's equipment manager be able to order a slew of XXL gloves? We haven't had that since Boykin graced the program with his large hands.

I don't think they'd fit. I thought I'd read that he wore XXXL.

I heard that his hands require size V gloves because they are big, you know?

It's true what they say about big hands....

This interview and write up is nothing less than glowing. It's becoming all too clear that we may have a really great player on our hands in Nelson.

The speed parts are particularly exciting. Having sprinter track speed at 240 lbs is insane.

I'm excited about this kid. Sounds like quite the athlete and type of player we need, and is already sized to see the field early on in his career.

Whew. Lots of high praise about Cole. Seems to me to be a mix of Reggie White and Sean Taylor.

Sounds like he's got some Sam Rogers heart/leadership in him. Look forward to seeing him suit up for us.

Kind of disappointed his Hudl didn't include a 4x100 relay clip...sounds like that would be worth watching!

Now this interview/write-up/future Hokie was worthy of logging in so that I could comment. He sounds like a special kid on and off the field. It also sounds like the TNT combo is something these recruits see as a strength for VT. There is a great opportunity for DLinemen to come to VT and to be coached by not 1 but 2 guys who know what it takes to get to the NFL.

Is he the faster player on defense too?

They say games are won in the trenches. Given Vance Vice's evaluation expertise on the offensive line, if TnT can do the same on the defensive line, we are going to be looking good.

Good point, top 3 players in NFL WERE 3 ⭐️S. I think we get hyped up on the stars, myself included. Caleb F. Was a 3⭐️, had he played this year, he would have gone 1st rd. had he played, still might. Iam just a little bitter about the recruiting efforts coming from Fuente, we should OWN VA. Lost some big time recruits the past few years, need to get that back.

I think Fuente takes some unfair criticism for recruiting in VA. Frank wasn't exactly setting the world on fire in the 2010 decade, and Fuente was expected to fix that without any initial ties to VA. I think he is headed in the right direction, but I think it was unfair to expect him to fix it overnight, which he tried to do.

You know we have 5 commits from Va and probably a 6th coming in the future right?

Would you say we "OWN VA" for this class? We might have a strong pull of contributors, but I don't think that means owning the state

It's better than having 0 va recruits isn't?

Yeah. I think OL is the one position group on offense where this staff has demonstrated success in consistently developing talent. Towards the tail end (edit: of bud's and wiles's tenures) I felt like DL was more hopes and prayers that the players we were bringing in would be successful because they "fit the profile".

If we can start turning underrated DL talent into high level P5 contributors like we have on the OL, we could quickly elevate the program's floor and ceiling

The ceiling is the floor? /s

Nelson seems like a great kid, a great prospect and someone who would of had a much higher 247 ranking if he gave a shit about it. We got a steal here folks.

However, as has been discussed ad nauseam, this cycle has more potential for diamonds in the rough than any year in recent memory. With the extended dead period that could well extend up to and beyond the ESD and there being no Spring/Summer camp circuit at all, no fall football for some states, potentially no HS football at all in some states there will be a TON of guys who slip through the cracks this year from a rankings perspective and there will be teams who take advantage.