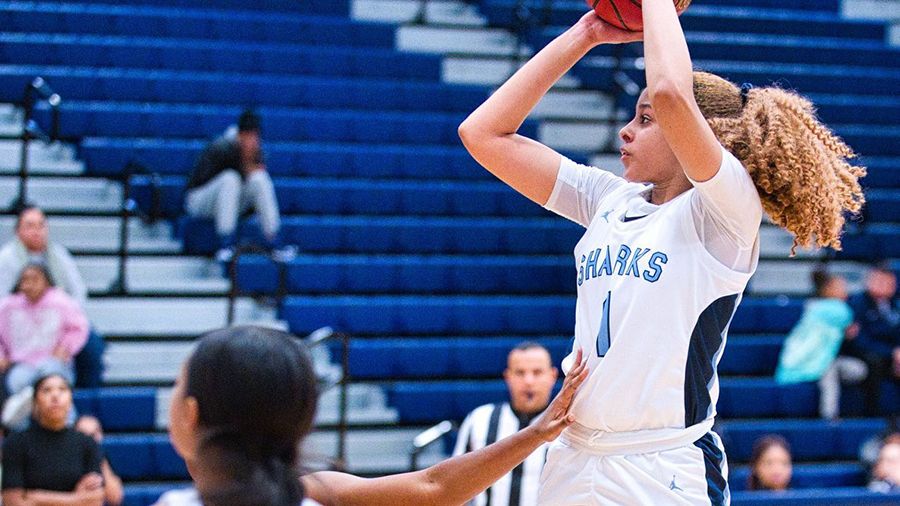 Virginia Tech women's basketball added a blue-chip prospect to its 2021 recruiting class when Alyssa Andrews opted for the Hokies over Washington and Rutgers.

Andrews and her family visited Tech last Friday and the small town feel and centrally located campus appealed to her.

"I thought I was home, I felt comfortable," said Andrews.

So much so she ended her recruitment that night and publicly announced Saturday.

Kenny Brooks led the charge on her recruitment, who Andrews described as caring and relatable.

"I'm really close with my father, I'm a daddy's girl," said Andrews. "It was important to me that when I was being recruited, to have that relationship with the head coach. It didn't have to be a father, exactly, but some sort of figure that I could have away from home. With Coach Brooks, I felt comfortable. I felt as if he'll be a father away from home."

Andrews noted Tech consistently communicated with her, and didn't disappear throughout the recruiting process. Through Zoom conversations she learned about Tech's roster makeup, how she fit, and its academics.

"I felt very wanted. I love that feeling, that they want me," said Andrews.

She evaluated her 30-plus scholarship options with her own pro-con list and watched film to understand the basketball outlook.

"I did my research on all the schools", she added. "Coach Brooks has been there since 2016, and from there he's gotten better every year. He's recruited a very good class every year, which I see as a positive."

It didn't take Colgan head coach Fred Milbert long to know he had a star on the court.

"When we finished her freshman year, it wasn't a week and she was saying, 'Can we get back into the gym and start shooting?'," Milbert said. "And we would get into the gym, probably 2-3 times a week, with just shooting. She'd put up five- six-hundred shots or more, in an hour, hour-and-a-half or so, and she'd work on her stuff, and then she'd go play AAU. So she really became special then. And that's when you recognized that she was going to be just a little bit better than other players."

Milbert noted her ability to read defenders —whether to take the ball to the hole or pull up — range, and rebounding acumen distinguish her from her peers.

"She has superb timing coming from outside, and getting her hands on the ball," Milbert said. "She's got a unique ability, great body control, to not go over the back, and keeps herself out of foul trouble. This is a girl that had 20 total rebounds in games three to four times over the course of the year."

"I love to rebound," Andrews said. "It's a second chance. It's free, so might as well go get it."

Last season as a junior Andrews averaged 22.1 points, 12.2 rebounds and 2.8 blocks per game. She earned VHSL Division 6 player of the year honors and helped guide Colgan to a 21-6 record, district championship and state playoff berth.

"I've always had a target on my back," said Andrews. "I still like to put my head down and work. If I'm outworking the rest of my competition, I don't have anything to worry about."

"She always wants to be better than the next person she's got to play," added Milbert.

Before she arrives at Tech, Andrews wants to improve her consistency shooting (47.7% eFG%), become quicker to account for the variety of defensive matchups on the wing, and fortify her ball handling.

Milbert, who enters his 20th year overall and 5th at Colgan, has guided players to Virginia, Stanford, South Carolina, and Xavier. Two of his pupils, Rachel Hemmer and Charleata Beale, faced off in the 1992 Final Four.

How does Andrews stack up?

You're gonna love the fall then

Looks like it's all coming together for Coach Brooks.

You know I wasn't sure about the hire, mostly because I don't know anything about basketball coaches, but I believe he has done a tremendous job these past couple years. I have also noticed some nice momentum for the team and it seems to keep going. I'm excited to see what these Women can do whenever the season gets going.

A high-level talent in the 95 corridor staying home! Maybe Brooks and staff can give lessons ;)

I'll admit my initial disappointment when seeing this wasn't men's basketball, but he'll yea I'm excited to see our women get better too. They were pretty close to doing something special last year, weren't they?

Kitley is going to be an absolute monster for us. She was so good as a true freshman.

Hopefully picking up elite players like this tips the scale

Welcome to the Virginia Tech Hokies!

Great momentum for the program. Lady Hokies are getting good.

Always good to see talented players show their smarts too and picking Tech. I hope we get a basketball session so the ladies can keep their NCAA tournament streak going. Congratulations to Alyssa!