This is per 247 from the Fuente Presser, A few things of Concern. One is that they mentioned he would only have 2 years of eligibility after the redshirt. If he wins an appeal then he could have 3 years of Eligibility. This all has to do with the fact that he already redshirted at Oregon.
Here is the Link

The NCAA's decision to deny Burmeister immediate playing time will have adverse effects on the team and the individual. For the quarterback room, Ryan Willis is likely set to be named the starter, but the pecking order behind him is uncertain. Should Willis go down to injury, the Hokies will have one less option to choose from with Burmeister out of the mix. 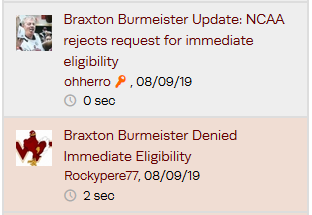 At least it's Friday!

sure appears to be the case. just about convinced urban meyer is the leader of the NCAA.

How in the HELL do other schools get immediately eligible approvals? How?

successful immediate-eligible tranfers have one of these things
a) have "reasons" for transferring beyond "I want more playing time" successful "reasons" include coaching changes, harrassment on campus
b) are graduate transfers
c) an immediate family medical hardship that falls within the narrow criteria for that status

I don't think Burmeister had any of those things

What was the reason from the kid who went USCw to Texas back to USCw in one spring?

He might have been granted immediate eligibility at Texas as his offensive coordinator at USC departed after only a month (Kingsbury took an NFL job), but that waiver process was ever completed before he transferred back to USC.

As for eligibity at USC now that he has transferred back, his waiver request is still pending, and the buzz is that he will be denied a waiver.

It would have made zero sense for Burmeister to be eligible.

Hoffman, on the other hand, it sounds like he would already be eligible if we had petitioned for the coaching change reason. We chose the health/family member reason and NCAA has Google Maps too and figured out he's 102 miles away from home. Hopefully that gets straightened out but it might have been our fault for choosing the wrong option.

This is right up there with "You didn't say 'Mother, may I' and 'I didn't say Simon says' in terms of a reason not to give someone a waiver.

I think "down" should be substituted for "up" in your statement but I agree with the sentiment exactly.

Can't he find an apartment that is 3 miles closer?

The guidelines put in place to judge the request were put in place AFTER the transfer occurred. Burmeister should file for an injunction on the use of the June 26 directive until after the current calendar year. The action is purely punitive, creates demonstrable harm, and is unrelated to the NCAA's core academic mission.

Perhaps he can suit up for men's soccer next week, he would be fully eligible.

He doesn't qualify for a waiver even when held to the standards applied to Justin Fields or Tate Martell.
- no coaching change at Oregon (he stayed a year after Taggart left)
- no reported harrassment

honestly I can't even remember a grounds for a waiver being mentioned when it comes to Burmeister, only that he filed for a waiver.

NCAA doesn't have any waiver standards; they have guidelines; which creates fertile ground for arbitrary and capricious decisions.

[At one point in time, they used to grant an additional year of eligibility in cases like Burmeister's. But not now. So Burmeister loses a year.]

They then issued a directive in June 2019 to tighten it up after the Martell and Fields horses got out of the barn. They said publicly that the reason for the directive was to create consistency and articulate what they were already doing. I'd love to see the admin record on that.

Burmeister's request, indeed all requests for the 2019-2020 season, have to be based on the same analysis...the one that Fields and Martell received. Using one set of guidelines for one student and a different set for another is almost the very definition of abuse of discretion.

Lawyer up and it makes the NCAA uncomfortable. IMO it was a mistake to not lawyer up for after they bungled the Coastal Carolina transfer's initially application

Hoffman on the other hand should be approved and arguably is more impactful for 2019.

Agreed, and I don't even think it's arguable tbh

Sure it is. Oregon's WR coach changed after last season and Burmeister didn't feel comfortable with the stability of the Oregon program, as offensive position coaches have changed every year since he arrived on campus. Or Burmeister has undoubtedly ended up around students smoking marijuana, which is legal in Oregon, and felt it jeopardized his NCAA eligibility to potentially be exposed to those situations.

Both of those are every bit as reasonable as Tate Martell, Justin Fields, and Bru McCoy's reasons for a waiver. daveinop is right though that the NCAA supposedly tightened up the restrictions again... but then we'll see how they react the next time a blue blood needs a star transfer player in a pinch.

Based on where are QBs are slotted (by age). Depending on injuries and other QB development, This may be a blessing in disguise in a year or so.

Willis sitting out a year seems to have worked well for him and us.

I believe he already used his redshirt last year, so this year is just lost now.

So who is our Backup? Quincy or Hooker?

Likely situational and still being decided.

Based on my advanced knowledge of having read half an article about the Spring Game, id say Hooker

Not a surprise. We just need some good news on Brock.

What are things we won't see the following season?

What blows my mind is that the ACC granted the request to waive the internal ACC delay of 1 year.

Article states that the waiver was granted "on appeal." Fuente indicated they are submitting an appeal to the decision, so we may end up in the same boat with Burmeister approved. The timeline for the Jordan Travis case seems to be well ahead of ours. He transferred to FSU for the spring semester, applied for the waiver immediately, was denied the waiver in the spring, then appealed, and just now heard he can in fact play.

I'm curious to know if the NCAA will move at a faster pace with Burmeister's appeal since the season is about to start. Also, if Hoffman is denied initially and then approved with an appeal, how long will we have to wait until he gets to play? Stinks we didn't get those guys in by the spring.

I'm curious to know if the NCAA will move at a faster pace with Burmeister's appeal since the season is about to start.

on the brightside, even though tate martell's transfer was approved, it appears that he is not going to be the starter

And there you have it and there it is. Transfer meant squat. Martel to Bowling Green!

I mean, who wouldn't want to learn under offensive guru Scot Loeffler?

Apparently on top of not being named starter, he went on a little temper tantrum and tore up the Hurricanes locker room after receiving the news. Only thing in the press is his name plate on the floor but a couple analysts on the Junkies radio show said it was a lot more than just his name plate yesterday.

I've seen that and have heard they changed the font on all name plates in the locker room, so everyone took theirs off. So I don't think the "tantrum" is real.

I thought the turkey bacon thing was funny but multiple players being upset about the font used to label lockers and/or equipment is absurd.

I mean, if it was Comic Sans or similar I'd completely understand.

Johnny Langan wins appeal and has 4 years of eligibility...the reason...

"The main reason why I came here [Rutgers] was just to stay home with my family and get a chance to play for my home state."

Do you know the timeline on when he submitted his waiver request and when he heard back, then appealed?