I wanted to take a good look into VA recruiting.
[Using 247 for all data]

Lets start for some oddities I noticed:
1) I have no clue on what is in the water in Woodberry Forest, but they have a lot of recruits for being in the middle of nowhere. I had to look it up on a map to find where it was.
2) Charlotte Court House VA is a real town and not a municipal building, who knew?
3) NOVA football really means Ashburn and Centerville, Alexandria is 3rd by a good margin in top 25 players
4) VA has a lot of QBs, VT has missed on a lot of QBs.
5) PSU recruits NOVA. It was rare to see a player go to PSU that wasn't from Northern Virginia. 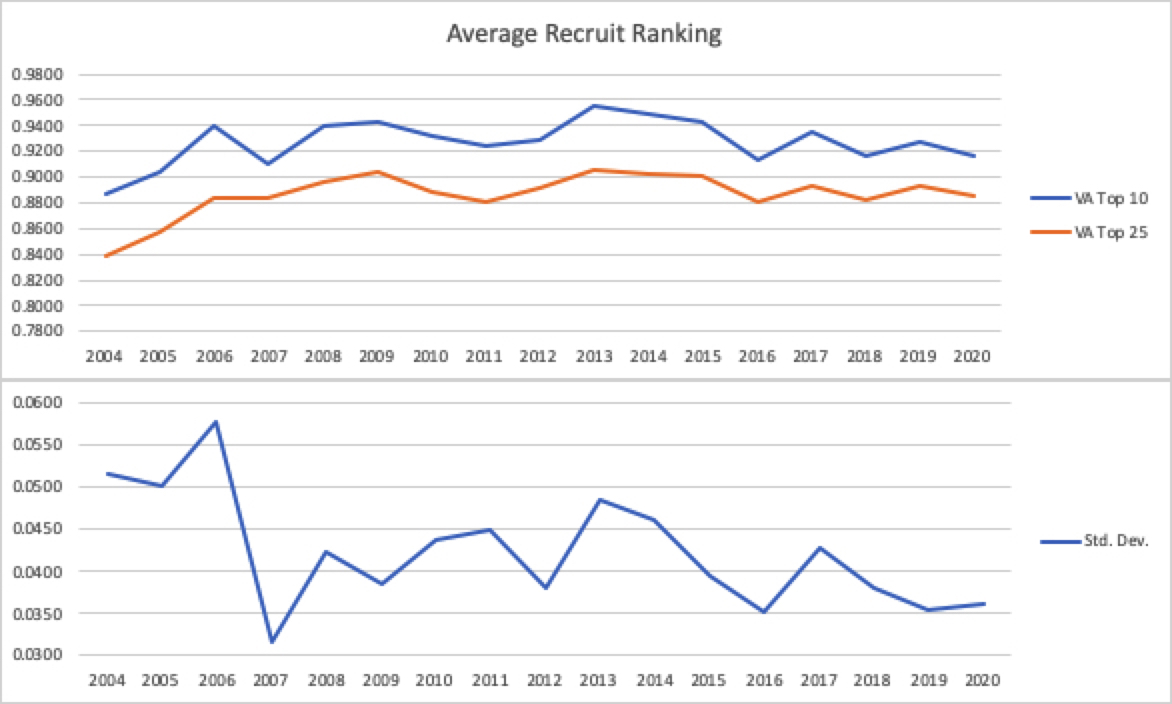 It's fairly steady through the years. Around 2006 you can see recruiting rankings pick up, but in the data you can see how players are ranked changes. In 2004 you get a lot of runs of the same number (e.g. 6 recruits all ranked .8500 followed by 4 recruits ranked .8333). Once 2007 comes along it is very rare to find recruits with the same rankings. I would say 2007 and beyond the rankings are comparable between the years do to this change.

We are in a bit of a lull in top 10 recruits right now, however in the top 25 recruits are as strong as ever in Virginia. 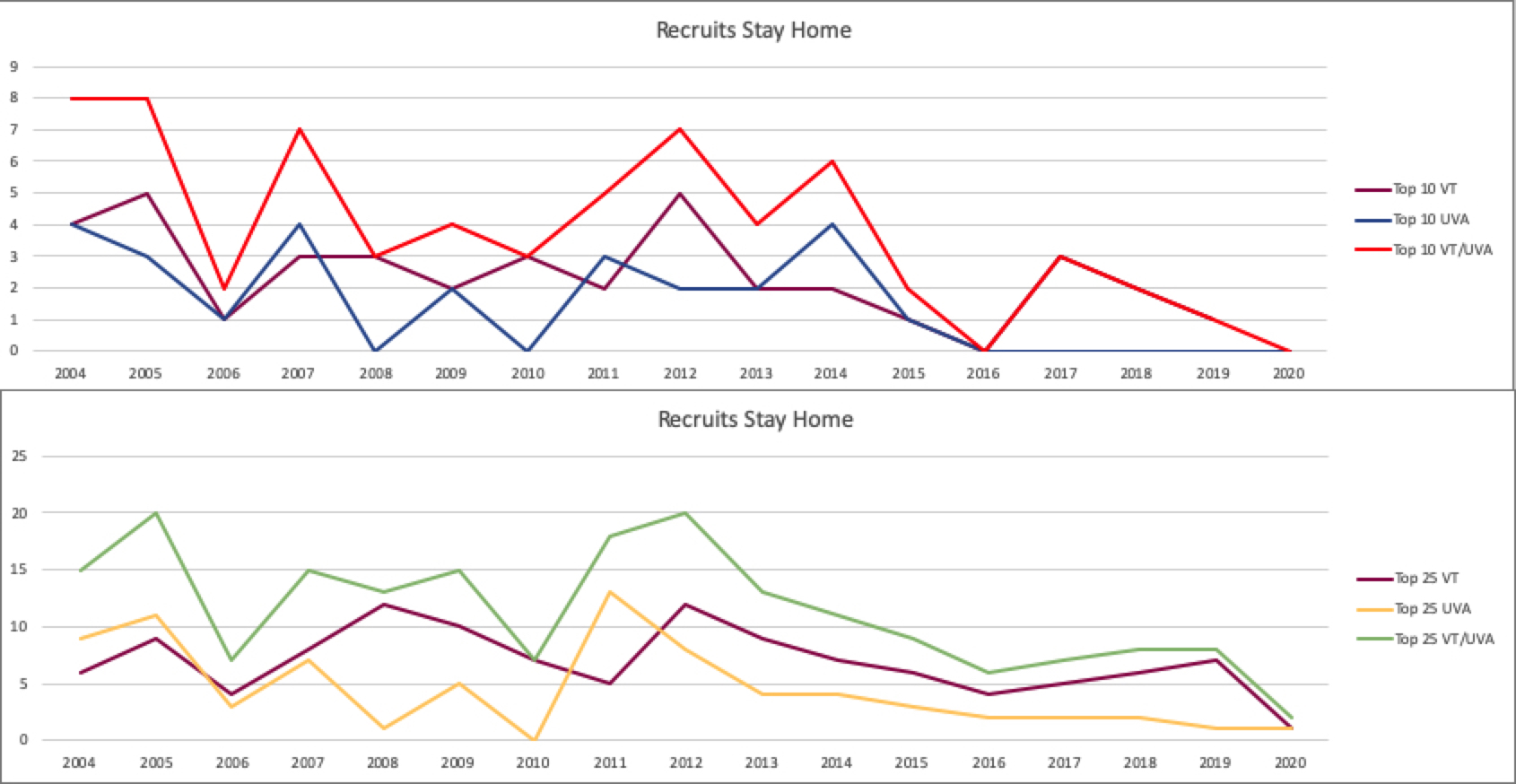 There is a downward trend for VA recruits staying home. UVA has been terrible in the past 5+ years at recruiting VA. Both VT and UVA looked to recapture VA in 2011 and 2012, but since then it has been tough.

Oddly enough, no one new came in to take these recruits. As you can see below, teams that have been recruiting VA lately have been doing so for years. 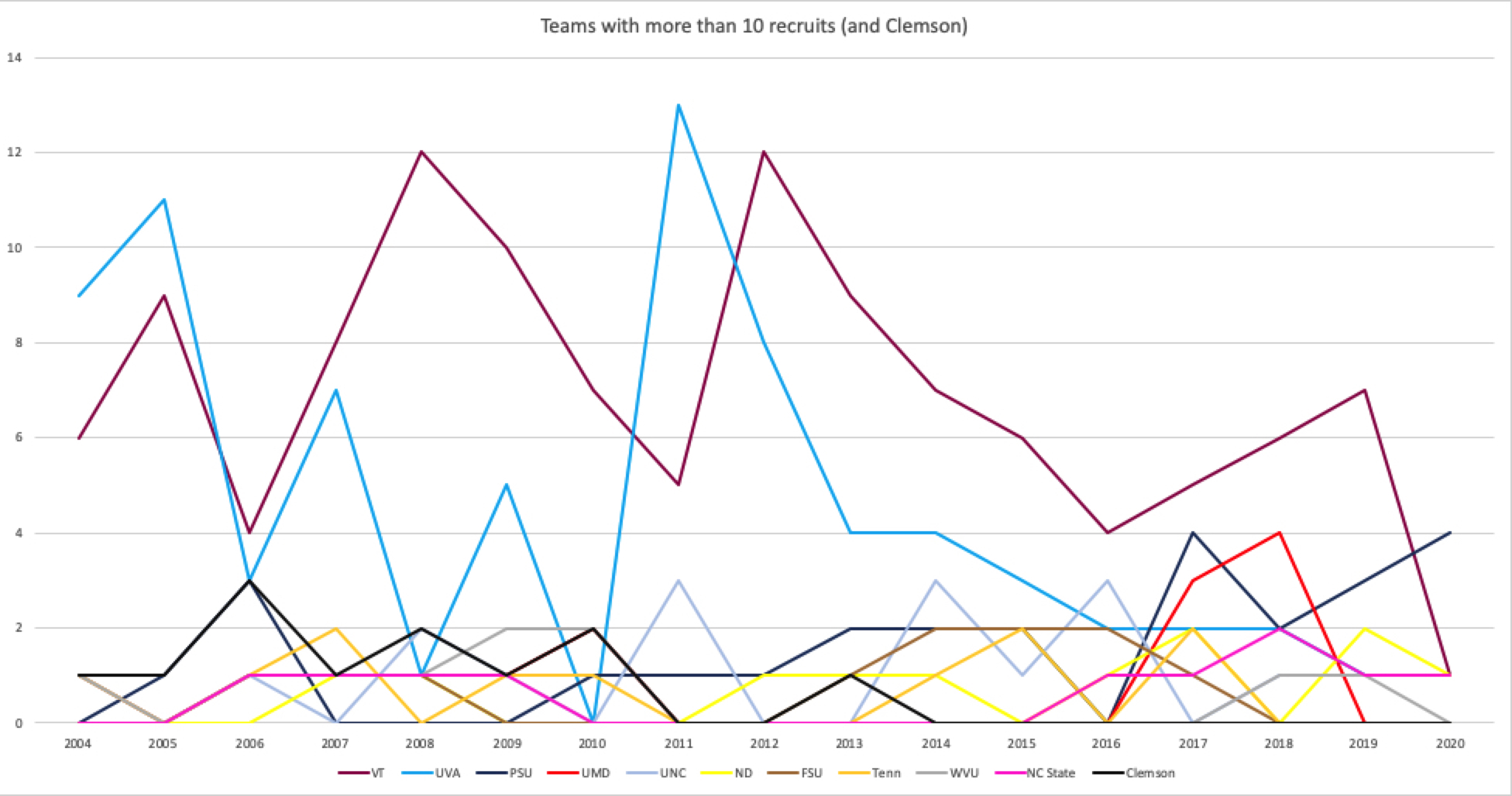 2006 had the peak number of teams recruiting VA top 25 recruits as 9 different teams got a top 10 recruit. Since 2006 VA recruits have spread out.

Other locations for Virginia Recruits 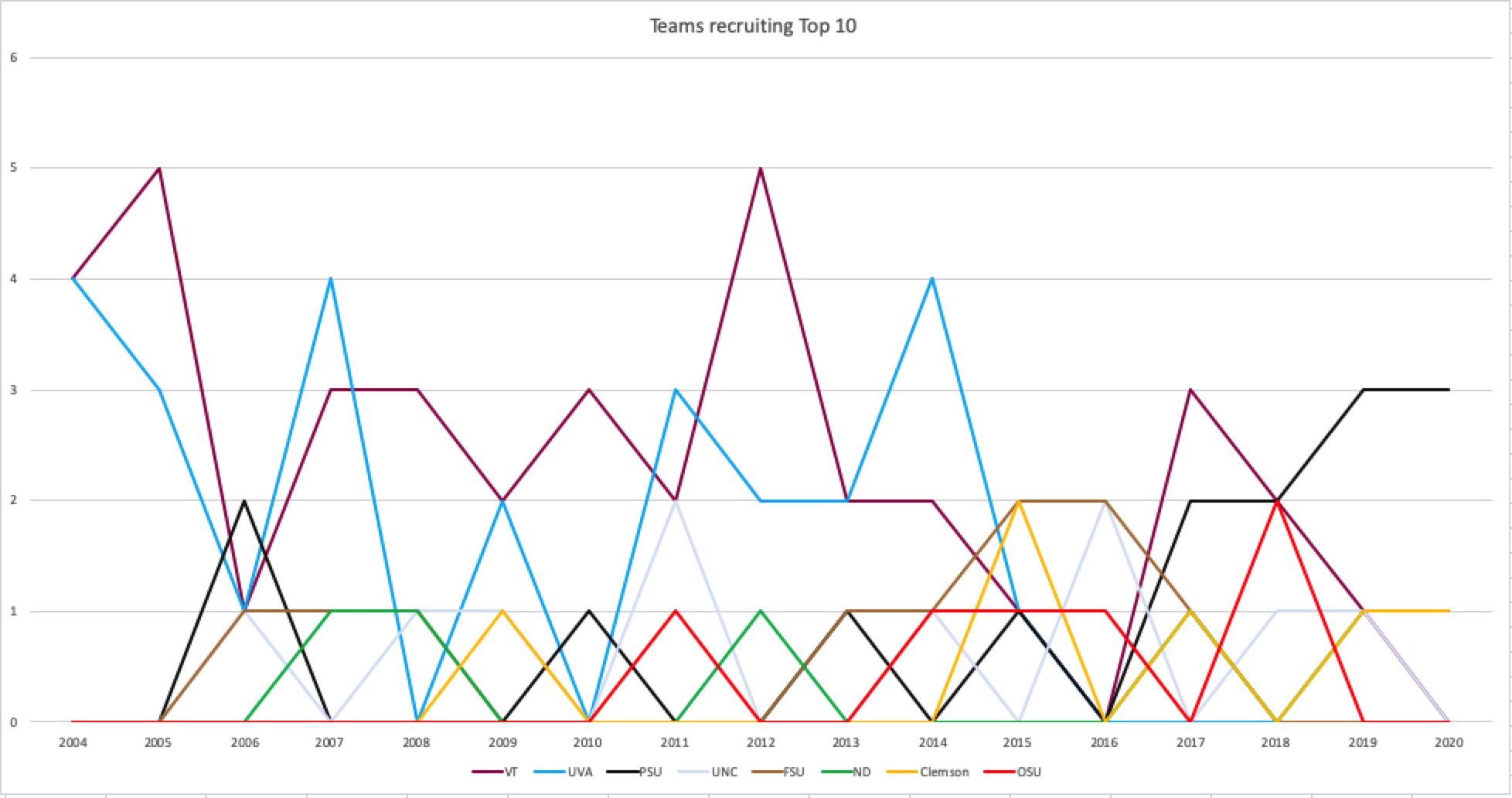 [NOTE: highest number of total recruits is left to right in the legend, VT has the most]
[NOTE2: Teams with 6 or more players from top 10 only]

The top 10 have been going to VT, UVA, PSU more than any one. This makes sense as these are some of the top schools in the area. UNC comes in 4th as it is not that far from Richmond, VA Beach, and some of the southern parts of the state. PSU has been recruiting VA for a long time, but in the last 3-4 years they have really made their names known. Overall 36 teams have at least 1 top 10 player yet only 16 have had more than 2 top 10 players.

Expand to the top 25 and you see this:

I added Clemson to the list but they only have 9 recruits from VA and that is not a new thing, it start with Tahj Boyd over a decade ago. Like the top 10, VT, UVA, and PSU heavily recruit VA. The interesting thing is UMD is next, but they don't get a lot of top 10 recruits. Overall there were 54 teams that had at least one recruit from VA. Out of those 54, 26 of the teams had only 1 or 2 players come from VA.

Where do the recruits live

Next, I am going to look at where to recruits come from. I divided the state in to 4 main areas, and two special areas. The main areas are NOVA: Fredericksburg to Winchester and North, VA Beach or Hampton road what ever you want to call it. Basically anything east of Williamsburg. Richmond contains Richmond to Williamsburg and surrounding areas. Finally South Central for all of the areas basically from Charlottesville down. The two other areas are Prep which is Hargrave and Fork Union and BFN for places that really don't fit in the other 4, mostly King George County. 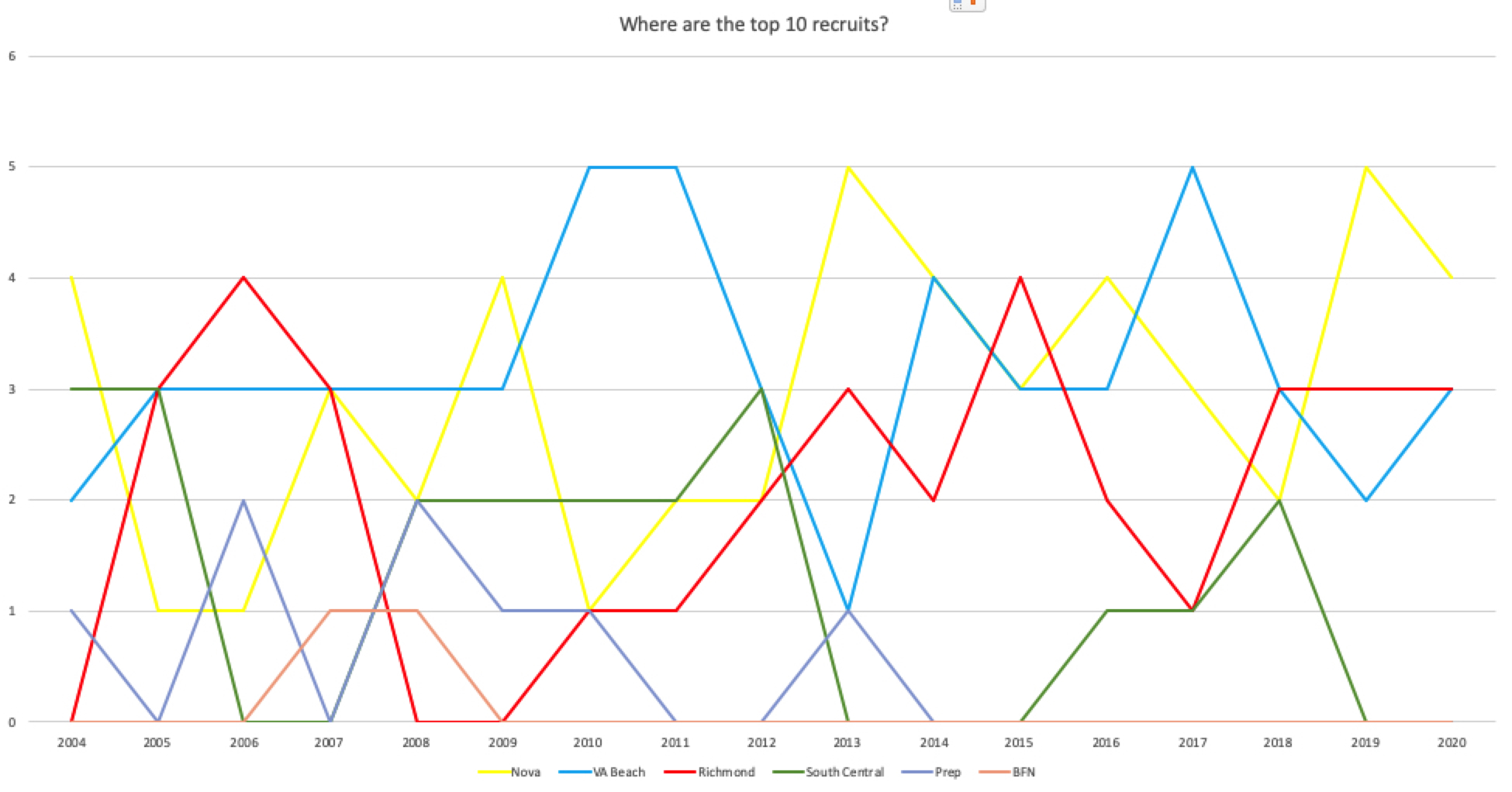 The top 10 recruits come from VA Beach, then Nova, and Richmond. There are twice as many recruits out of Richmond as their are out of south central Virginia. Nova and VA Beach are neck and neck. 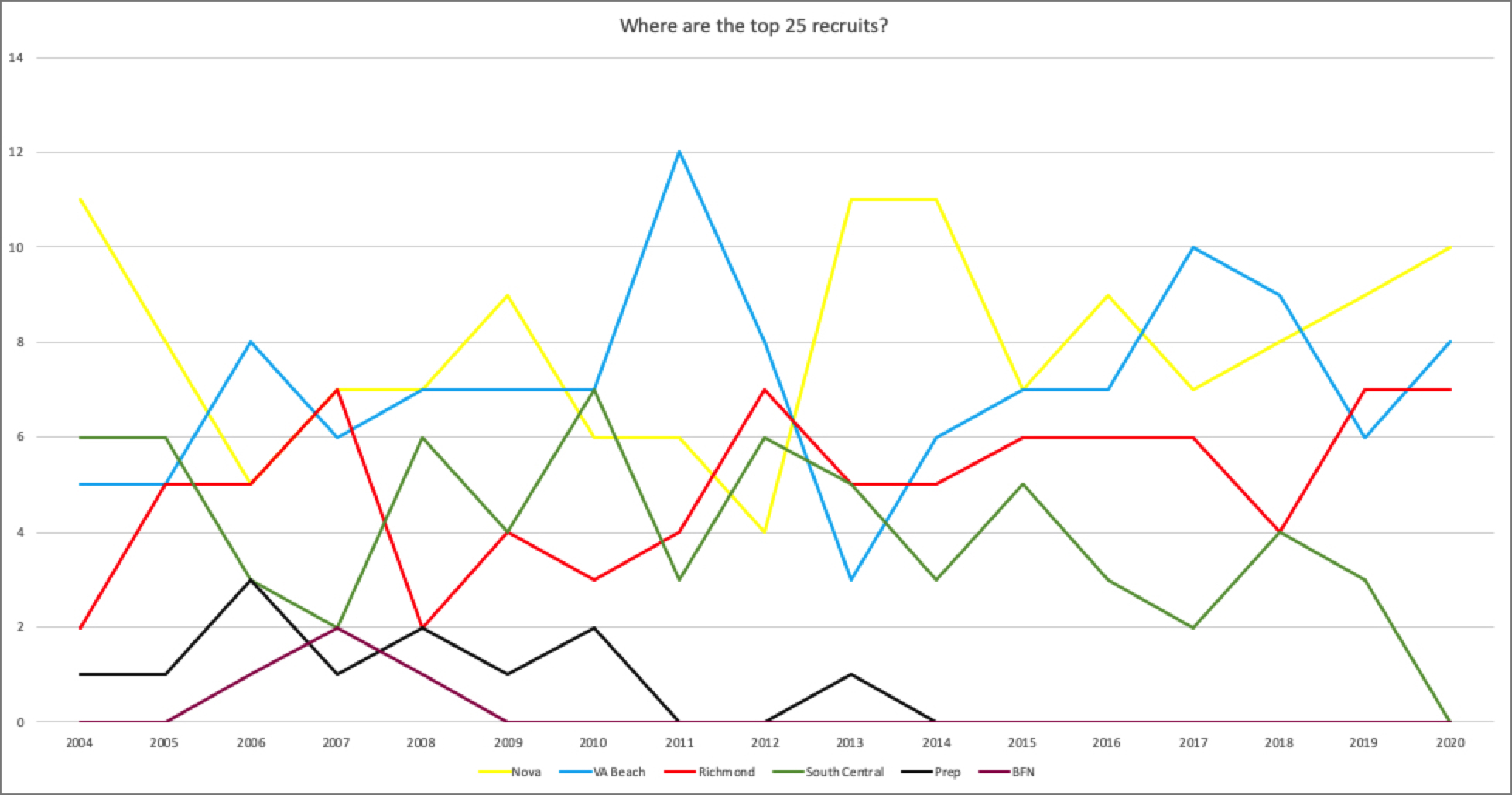 If you look at the top 25 recruits then Nova takes the lead. The difference in numbers of top 25 recruits from VA Beach to Richmond is larger than Richmond to the rest of VA. To me, this feels like the recruiting rankings for players in the middle of nowhere VA is not as good as NOVA, VA Beach, and Richmond as they catch up a lot percentage wise when talking about Top 10 vs Top 25.

Recruit positions
Looking at positions we see the following:

QBs and RBs are more likely to be ranked higher, which I think that makes sense because in high school those positions are of higher value which means better athletes are in those positions.

By year we get the following for the top 10: 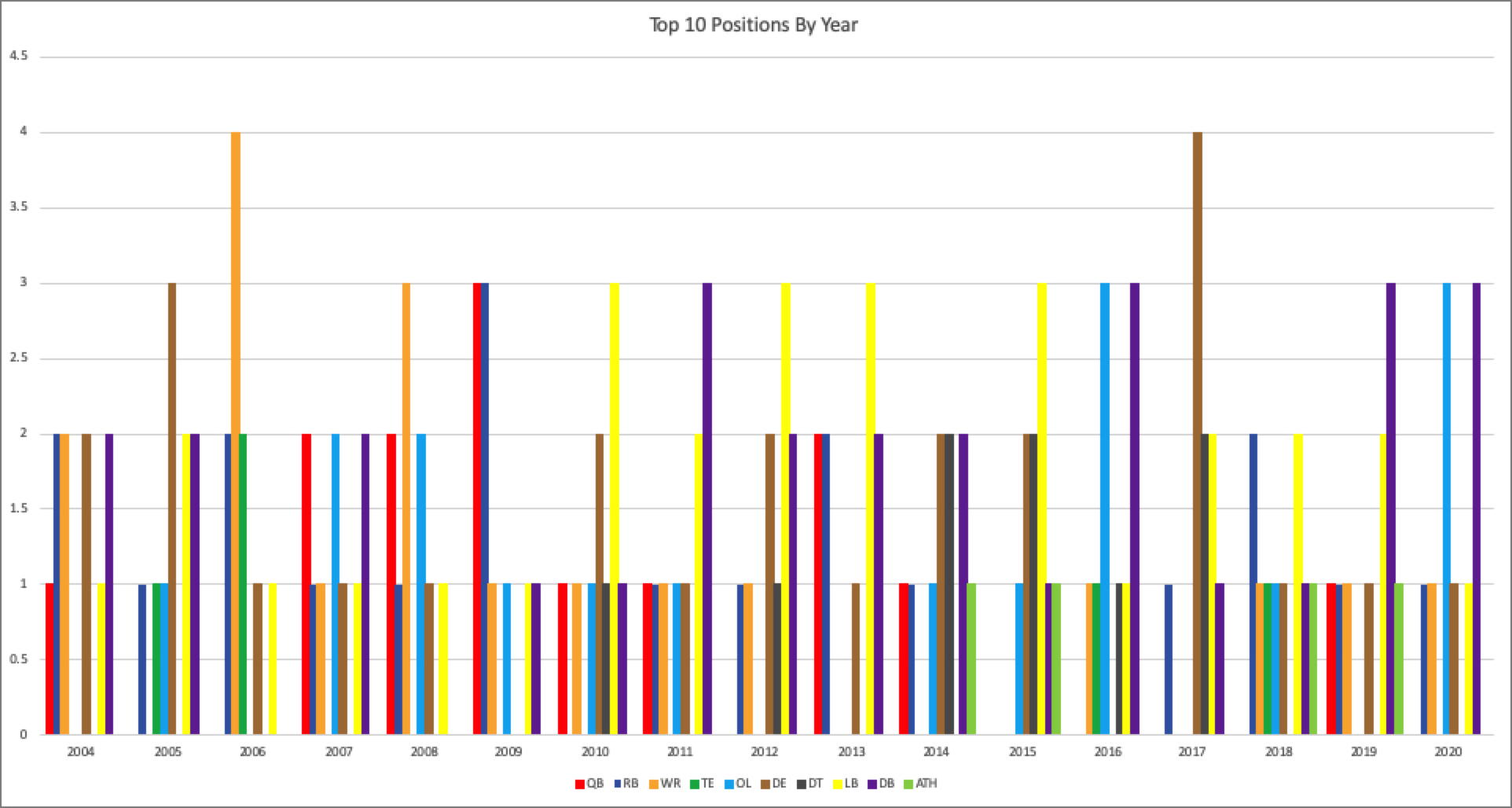 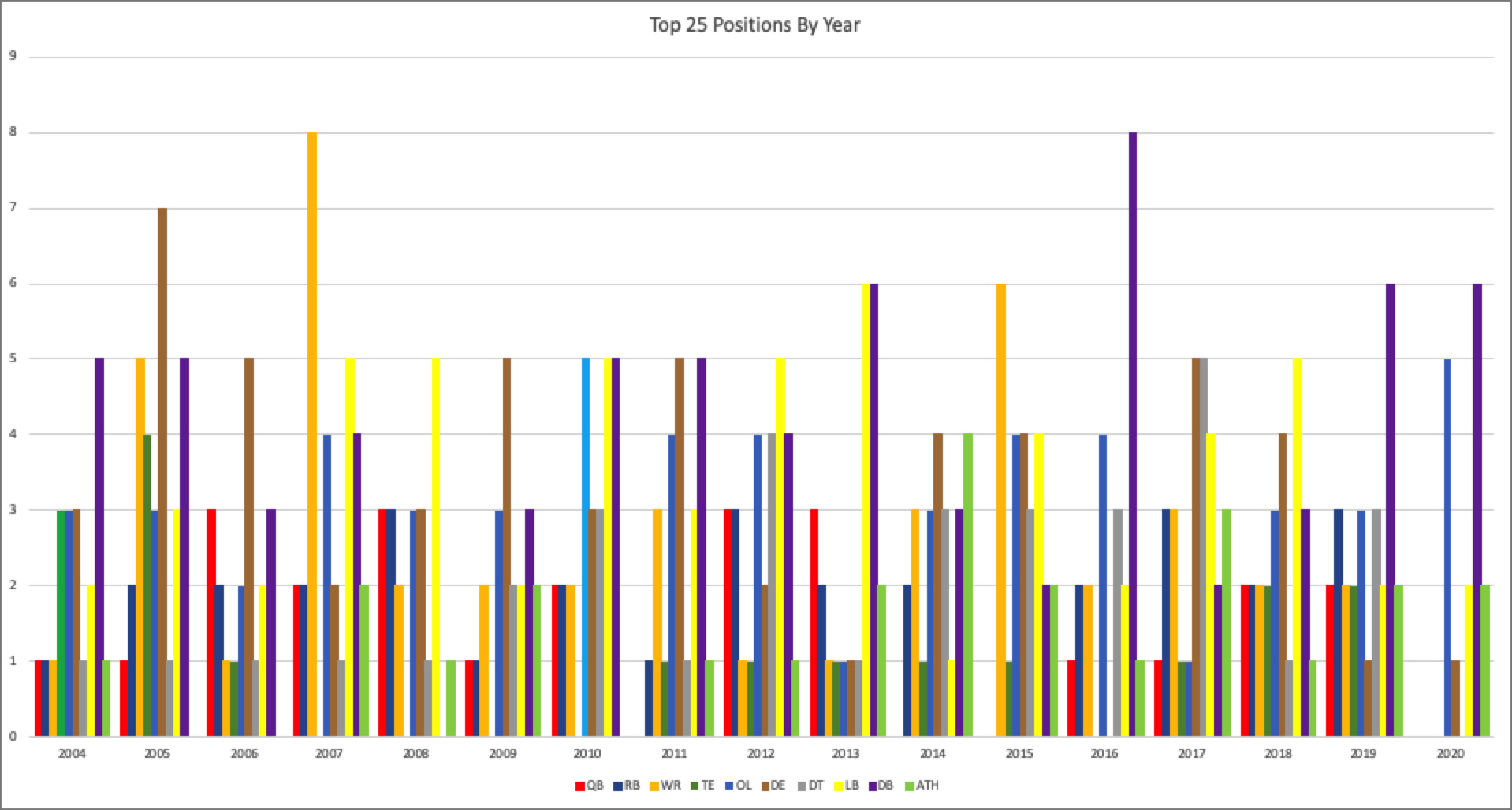 Looking the the recruits by year show that DEs have been a premium lately as their have been less than most any other time. We did recruit the linebackers at the right time. DBs fell off for 2 years but the 2019 and 2020 have been great years for them. Overall DBs in Virginia is the most abundant recruit. WR and LB are the only two positions to have a player in the top 25 in every season. LB did that in the top 10 too. DE has been a solid top 10 positions. We did get one of the 4 top 10 DEs in 2017 (Garbutt) however, DE should be well recruited, there is a lot of talent at that position in VA.

I hate to post this because my final conclusion will set some people off, but ...

We need to be recruiting Virginia. The talent hasn't left, or shifted locations or new schools where we've never recruited. It's in the same places, the same schools showed up a lot. Making in roads to Georgia, and Texas are great as they have larger pools of athletes, but if we needed to get the players from Virginia in 2006, then well we still need those players.

Woodberry has shit tons of money. Private boarding school in Orange County. You can probably count on one hand the number of local kids enrolled so it's not about local talent. Lot of rich folks send there kids there and donate to their athletic department. Nice facilities. When I was in HS, their indoor track was nicer than Tech's. Anyway, they have money to hand out schollies to "deserving" athletes to improve their program.

Damn. They must have a good fund raising arm, decent social media presence, and a great donation website interface.

Maybe we can recruit their fund raising staff?

The Long family sent their kids there. We played them in football either regular season or playoffs all four years.

You're confusing Woodbury Forest and St. Annes-Belfield in Charlottesville. The Long kids were at St. Annes. Woodbury is in Orange.

Yep your right. All those schools start to run together.

Like many of our local bluebloods, the Longs are residents of western Albemarle. If you drive west on Rt. 250 from town, you can roll down the windows and smell the money.

No doubt. I have to drive that route periodically for work field testing. The property along that stretch is insanely beautiful and just reeks of old money.

Yes Chris Long was not a woodberry grad according to 247.

For the 'where do recruits live' graph, can you include a legend or identify what colors correspond to which location?

Anyways, Thanks for doing this! I've been curious about this stuff as well. Any chance you'd be willing to share your raw data?

I can, but the raw, raw data is in a mysql database, the charts are in excel but I just dump query results to csv and imported into excel. So I am not sure what you want or how best to get it to you.

Legend is at bottom of graph but basically
Nova (Yellow) = Fredericksburg to Winchester and north (while not true in 2005, it's pretty much true now)

VA Beach (Blue) = Hampton Roads, Norfolk and pretty much every where east of Williamsburg

Richmond (Red) = Richmond area, Williamsburg, Petersburg and I think 1 guy on I95 down near North Carolina border.

And it's not a shock that the downturn in our recruiting lines up with:

One thing that does show up is the whole Greg Boone as QB issue. We tank in VA after than until 2011ish

I think the narrative is that Boone wanted to be a QB and when we converted him to TE, VT got shut out of his HS.

Yes. Supposedly the coach was extremely pissed and didnt have anything nice to say about us. We went from 2005 - 2012 with out anyone from there (2012 was J.C. Coleman). Even still only Coleman, McClease, and Artis have been the only recruits to sign with VT. This is the same school that Josh Sweats and Aaron Brown went to, two highly rated Dline recruits.

I'll add Shane Beamer joined the staff to my list as well. He did not sit well with Virginia HS coaches, for whatever the reason.

Are these charts in Tableau? If so, how did you embed them?

Penn State has perfected the art of talking shit about VT to NOVA recruits. So annoying.

I'd heard that. Despite the fact that part of their culture is ignoring sex offenders to win football games. Guess we're better than throwing that out there to recruits?

Yes, ethics can either go one way or another in cultures.

I like the analysis, but all of your charts after the first four have too much information to visually draw much out of them. You might consider grouping them to clean up the charts. Maybe group 2004-2007 since you have already acknowledged the difference in the quality of data in that set, then 2008-2011, 2012-2015, finally 2016 to present (post Beamer era).

Good idea, I wasnt that happy with the presentation, they look much better on a 2k monitor where I can zoom into the data.

I really wanted to do trending data but they were already busy.

A lot of numbers, and a lot of charts.

What does it all mean, really?

Other than we need to build some relationships in state that have been lacking for a long time.

Pretty much the bottom line is recruit VA better. The talent that has been here is still here. However, personally recruiting VA isn't enough the fall off from 10 to 25 is way more than say Georgia or Texas.

The other take away is that QB, RB, DE, LB and DB are abundant positions in VA, and really have been for a while. There was a massive up tick for QBs in the Wilson, Tyrod, Manuel, Renner, Boyd time frame. So that gets a little over inflated and arent DB or DE. DE has been down the last 2 years so we've had to go other places but overall we can get those positions locally.

This seems bad to me.

Better than that year UVA had a zero!