The Bitter Twitter says he tore his ACL junior year and wasn't able to come back until week 7 of senior year, still made 1st Team all-region anyway.

Maybe he meant sophomore and junior since he should be a rising senior?

He probably got that correct and I got it wrong

I think he just said "last year", and didn't specify the class.

RAF Fuente does it again. Way to go, coach. 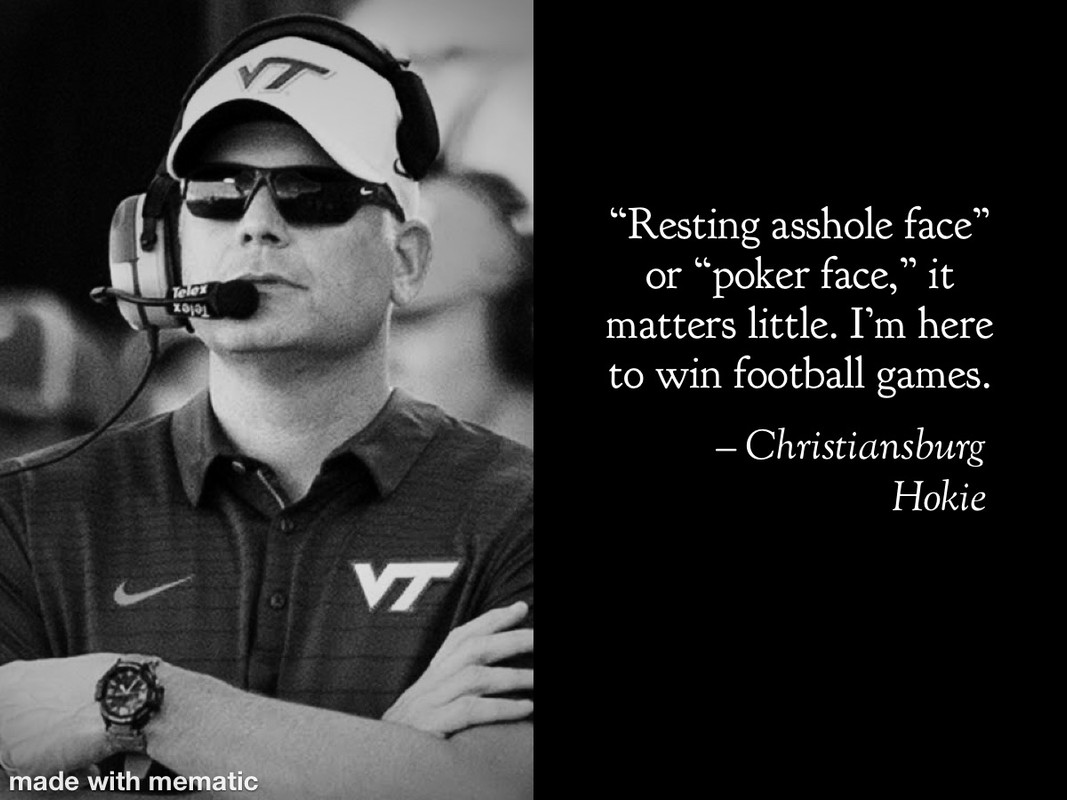 Fuente is doing some good things for the program.

You know we have recruiting momentum when you feel like you need to check for new commitments daily...

Seeing some other members of the class taking notice on Twitter.

Always love to see us land a VA kid. Hoping we can keep up the momentum.

Recruiting class getting better every day. This is the way I want the off season to be.

this is Fuente after the past two weeks to Hokie fans.

An in-state under the radar recruit that calls VT his dream school. Hope we get more of these.

I hope that over time, VT can CREATE more of these.

Winning back the hearts and minds of Virginians is a worthy goal.

My dude is already putting in work

Tell him all about how he can be the next Ricky Slade up there.

A RB from North Stafford favoring Penn State...there's no way this doesn't work out for us!

in all seriousness, White would be a tough pull
gotta weaponize Slade transferring imo

May be easy depending on Ford's season this year...if there is a season....😬

Maybe, but Tevin's recruitment is going to be about more than just Penn State or his friend Devyn Ford. I don't see this one going VT's way, though. Happy to be wrong.

Regardless, Shawn is working it

Get Mcmillon and Poole on board and baby, you've got a stew going

Naquan Brown's commitment date is a little over a week too, i think

McMillion and Poole would be huge gets.

There are two rules of thumb for individual recruits for those who follow less closely.

2. You want guys who are RISING/staying relative stable during rankings updates. You don't want the guys who look the part as sophomores, get really high composite grades early, then as their on-field performance and development don't live up to the hype they slowly drop in the rankings all the way up to signing day.

Poole and McMillion are on the rising end. They've been either steadily or swiftly rising with each update. McMillion's composite dropped a little bit recently but we are talking like the ten thousandths place or so. Both players have been rising in general.

After reading your comment i went over to 247 and checked our our commits' scores correlate between the composite and 247 score. All but like one or two of our guys have a point to two points higher 247 than their composite score.

One player that is an example is will johnson. If rivals would get off their lasy asses and bump him up to a 3 star😐

He is under 6'4, not sure if he meets the new recruiticorning criteria

Check out this gem I found when I googled his name + track to see if he ran and what his speed was like...
5 years ago at 4'9" Shawn was primetime'in it!

My laymans thoughts on his film.

1. He's got the sideways shift that reminds me of Reggie Bush (but certainly not the speed). Not sure how that will translate to DB for us, but it also reminded me of the RBs from Pitt that always did this right at the correct moment to screw up our blocking scheme :(.

2. He plays like a MIKE in that he doesn't get caught in the shuffle (probably because he's so far off the LOS), but mainly he has good discipline to not get distracted by the motion and finds the bubble and plugs it in. Decent lateral speed too. Not sure what schema we'll have moving fwd, but I think with Foster he'd be the free hitter kind-of-guy (rover?) to whom everyone funnels the ball towards.

3. He's got good technique for tackling. Tackling low, wraps up, and doesn't seem to go for the big Madden hit.

He would make a great Nickle/Whip with his athleticism and speed. Definitely a disrupting the play on the defensive side of the ball. He could be a great punt returner. I like it

Is there any idea if Tech is pursuing Slade? I'd be in favor of it, given how unsettled the RB room still is.

There's rumblings that he's looking at ODU to reunite with new HC and former Penn State OC Ricky Rahne. Slade's dad is trying to control the message, though:

I keep seeing post about my guys intentions. If it ain't come from him or me don't believe it 😂😂. Ricky has not committed anywhere yet.— Ricky Slade Sr (@Team_Slade) June 19, 2020

Truth be told, I don't want him. The kid had his chance the first go around and we got "big dogged." We have several promising running backs on the roster that deserve the opportunity first and foremost

I wouldn't be opposed to giving Slade a PWO offer. To me, if you want to transfer to VT after we recruited you that hard in HS and you choose to go somewhere else I'd be willing to give you a shot but you're going to have to work for the full ride scholarship.

I'm surprised there aren't a number of P5 teams making noise about Slade, but there will certainly be schollies (probably numerous) at the G5 level for him.

Sorry, unless he's got off the field issues, I'll happily take a former 5 star recruit who happens to also be from an area we would like to improve our recruiting in. I'm assuming he hasn't forgot how to play football, and that it's merely a situation where PSU just has a plethora of top notch options.

Our current RB room is full of three stars and transfers who haven't really set the world on fire yet. Sure that could change, and hopefully it does, but I'd suspect Slade stacks up favorably against all of the guys currently on our roster.

College football is big business, if there is a better option available you have to take it, again, assuming no other issues apply. Spurning him out of spite only hurts us, and also could further the narrative amongst the HS coaches and players that VT is out of touch with Virginia recruiting. Being a positive landing spot though could result in a ton of recruiting goodwill.

King was small and needed to bulk up, but had a number of good runs, I believe a couple really long ones were called back (one I remember distinctly was a hold away from the ball after it would have made a difference in the play really so shouldn't have happened). I think he'll be pretty darn good (and just looked - 247 had him as a 4 star). And Gary, if I recall, was coming off an injury, so we played him in a couple games but limited him (a lot) but I think he had a couple good runs also.

Gary was coming off a broken femur during the playoffs his senior season.

I'm assuming he hasn't forgot how to play football, and that it's merely a situation where PSU just has a plethora of top notch options.

Except highly rated recruits are busts sometimes and it's got nothing to do with them forgetting how to play football. If he ends up at an ODU, it seems a lot more plausible that P5 coaches just believe he isn't a great college player than VT is making some rash decision out of spite.

It could certainly be the case that he was never as good as his rating, and if it turns out that he just isn't good enough, than sure, that would be reason enough not to pursue. The comments I was responding to though seemed to indicate that they wouldn't want him because he didn't choose us to begin with, and that just doesn't make a lot of sense to me. That seems more like spite, rather than making a decision on what makes your team better, which I don't think you can afford to do if you want to compete at a top level. That's all I was saying.

Whether he's good enough or not, I can't say for sure. I can only make armchair decisions based on the ratings and the potential reasons he was passed over. And when you take into account the quality of backs PSU has recruited, you can come to the assumption that Slade is still a high quality RB that just got caught up in a numbers game.

And again, there are always bigger picture recruiting implications that could be considered.

That makes sense, and that does seem like spite. Not sure if people read into it more, like locker room psychology where he'd be a guy that didn't want to be a Hokie to begin with, and he's going to what he considers a lower tier school and that he's better than the players currently on the roster so he'll get playing time, compared to all the kids on the roster now who wanted to be Hokies. Granted, don't remember his recruitment and if he just chose a different school, or if he said anything that would have caused ill-will. Like if Demetrius Davis decided he wanted to sign with us now, after what he said on his way out, I probably wouldn't want him because he may trash us at some other point in the future and, like I said, can only assume those comments would piss off the current players and they wouldn't want him around, so I wouldn't want him around.

Basically I think a 3 or 4 star player who wants to be here, and wants to prove themselves, will play harder and more together than with a 4 or 5 star player who thinks we're beneath him and will be the best guy in the room (mind you, I'm not against guys who want think they'll be the best, are willing to work to prove it, and want to play for us, just not the guys who think that they're above us and are likely to think they'll be given playing time because they came from a "better" school).

This is my main point. Not necessarily just out of spite but the fact that it becomes a problem in the locker room from day one if they go down that path.

Technically we didnt get Big Dogged until a year later with Ford.

But everyone makes mistakes, some people never learn and the rest become Hokies.

Great looking player. This guy has a bright future playing for the Hokies!

Tevin White is gonna be a big RB.