The days of VT's roster topping out in the 6-5, 6-7 range are over. Mike Young is looking for bigger, longer players who can play with the best in the ACC. On Sunday, Mike Young landed the (literal) big one. Patrick Wessler, the #4 prospect in talent-rich North Carolina for 2022, has committed to the Virginia Tech Hokies.

Excited to announce that I have committed to ⁦@HokiesMBB⁩ to further my basketball and academic pursuits. Appreciate ⁦@CoachMKYoung⁩ and the rest of the Hokie staff for the great weekend. Let's go Hokies!🦃🏀🔥 ⁦@CombineMbb⁩ ⁦⁩ ⁦⁦@CCEliteBBall⁩ pic.twitter.com/QSPoDsgBpg— Patrick D. Wessler (@BigPatWessler) September 19, 2021

The Hokies were one of the first major programs to offer Wessler at the beginning of this year. He took an unofficial visit to Virginia Tech on June 28 and committed on an official visit to Blacksburg this weekend.

Over the last year, college coaches took increased notice of Wessler's talent in the paint, where he's most comfortable posting up, rebounding, and blocking shots, but they also like the big lefty's evolving abilities on the outside. He's a really fun player to watch throw a shoulder and impose his will at the rim. Like any player looking to make the jump from high school to the ACC, Wessler will benefit from time in Tech's strength and conditioning program, but at 7-0, 235 (260?), he's coming in with plenty to work with.

"I have a really good relationship with [Virginia Tech's] coaches. They have a great history with bigs," Wessler told 247 earlier this month. "This past year their top two players were big men which is big. They're also in the ACC which is a big man's league so that's really appealing to me."

Wessler is Virginia Tech's second commitment in the 2022 class, joining South Carolina CG MJ Collins, and bringing Hokies' class up to #65 overall in the nation with spots left to fill. Rated a three-star prospect, he holds a 247 Sports composite score of 0.8936. 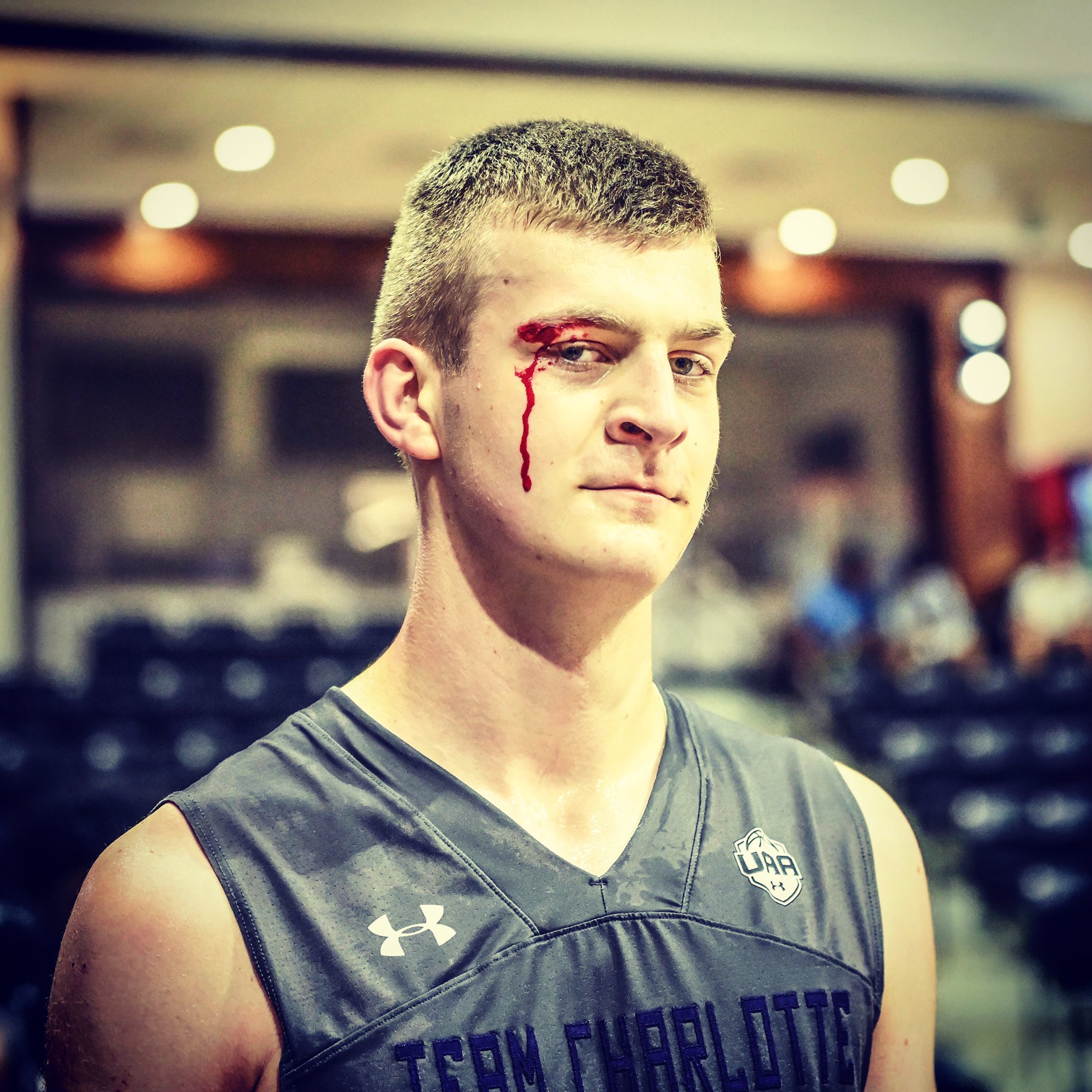 lol I had this one ready JIC but dang if I wasn't out of town. I was really nervous about Providence, or else I would have emailed the draft to myself and posted on the road! Room to fill out and get stronger. Rim protector. Soft touch. Welcome, Patrick!

Is this the real reason for the Cassel renovations? Need to raise the doorways.

Didn't think about how the context could be mistaken until after I made it. 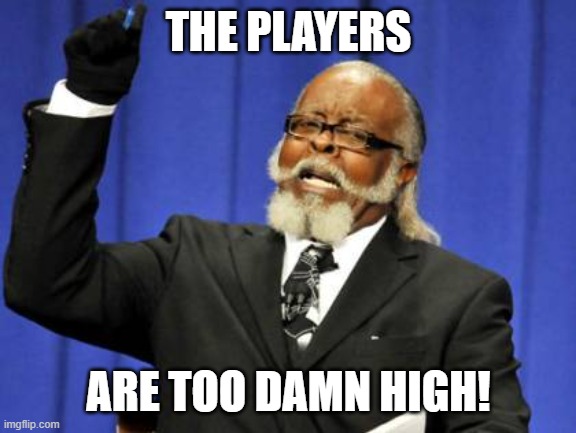 Not a problem in the Commonwealth ;)

Berman spoke with Wessler for The Roanoke Times

"The whole coaching staff did a really good job recruiting me, really made me feel like I belonged," Wessler said Sunday in a phone interview before heading home from his visit. "I loved the school, I love the people. Last night I just kind of had that moment where I was like, 'This is where I need to go.'

"I loved the visit, so I decided to pull the trigger."

Seeing what I can get. He posted it to Instagram in early July with the caption, "No call..." Tuff pic.

Appreciate you man. I got the cut when I caught a body and an elbow all at once😂 Had to go get it fixed up before I could get back in the game because it just wouldn't stop bleeding. Can't wait to be a Hokie next year. Go Hokies!— Patrick D. Wessler (@BigPatWessler) September 21, 2021

It was an elbow while playing Duke

Saw rumors that he was given an ultimatum on his Providence official and didn't appreciate the pressure. Either way, super excited to have another talented big join the program!

Saw those same rumors and, if true, hoo boy... my heart goes out to my Friars friends. As much grief as the staff may get for not closing the deal with recruits, there's a right way and a wrong way to close. It varies from recruit to recruit, but it always requires a deft hand.

I can't feel TOO bad, though, because I still remember them taking D. Duke from us ;)

FAM LETS GOOOOOOO ALL THE 7 FOOTERS

Watched his tape. Really technical for someone 7' tall..but way less jams than I would have if I was 7'

Same. But I would rather have someone play technically sound as a 5 than a flashy 5 who misses the basics.

For sure. I'm just saying I wouldn't be able to resist

Kudos for actually watching his tape... several hoop geniuses over at TSL hoops side calling him a 'project' based on 2 year old tape eval...

Here vs Clowney and Dorman is past winter.

Also talking about roster space and the problems we may have. They should call Mike up and let him know in detail what they caught that he missed ;)

Let's GOOOOOO 🦃 @HokiesMBB ! The Wessler Crew is so excited to be part of the Hokie Family! 🦃🏀🔥🦃🏀🔥 pic.twitter.com/yE1JcqQLkp— Colleen Wessler (@colleen_wessler) September 19, 2021

I saw that as well. Good job providing positive coverage and being genuine in congratulating them even when they choose a diff school. That goes a long way in making a great impression for VT.

And thanks for bringing this up because it's a good opportunity to refresh our perspective. These are young people making one of the first, if not THE first, major life-altering decisions in their lives...all at the ages of 17-18ish. And they're doing it in a social media fishbowl. The truth is, their recruiting journey is none of our business. When they choose to give us fans a glimpse into their process, that's a gift, and it should be met with nothing but positive vibes and gratitude even when it means their path lies somewhere else.

That's what most VT fans are about, and I'm thankful for the folks that embrace that philosophy.

(P.S. Players, coaches, and parents read message boards, social media post replies, etc, too. Don't make more work for our coaching staff like when a recruit reads defeatist, sorry ramblings about VT not being big-time enough or whatever such nonsense. Be the fans you'd want your kids to play for.)

Hey, even got the sister who goes to NC State in Hokie gear!

tall guy who plays like a tall guy; good hands; nice shooting touch; lefty...I like this a lot

Remember the days when we used to hate playing the likes of FSU because they had the one thing you just can't teach.... size

And it is wonderful to not have the smallest team in the ACC.

We are recruiting big men, and demonstrating that with our play we can incorporate them into the offense instead of just being a body on defense.

Who knew height could be a factor in basketball?

Is it really though? Having longer, more athletic players on the wing helps, yes. Having versatile big men that can rebound helps, yes. But just having really tall post players? I haven't seen a correlation. Baylor and Gonzaga just had two of the best teams in college basketball history. How many 7 footers in the rotation for either school? Zero. How many 6'10"? Only one each. There are tons of garbage teams every year with 7 footers. Also some good ones.

Hokie fans, and possibly Mike Young himself, seem to want to create a big 10 style team (look at every big 10 roster and then look at our recent recruiting). Personally, I have a philosophical disagreement with that style. I would try to emulate Baylor from last year since they were the most perfectly constructed team I can remember. That said, I support the coach and hope it works out. There have been plenty of good teams that had very tall guys.

I would love for someone with a lot of time on their hands to do an in-depth statistical analysis of whether teams with massive big men actually do better, taking into account strength of schedule, etc.

Best of luck to Patrick and welcome to Hokie Nation. But lets not put some crazy expectation that having this tall dude will win us titles all the sudden

Is that you, Brent?

I don't think anyone is suggesting that.

I think it's more that sometimes (like against Florida State), it has sometimes seemed that we should have someone on the court with some height.

I gotta trust Mike Young on this one.

Obviously that's a good point about matchups with FSU, but also i'm pretty sure that we're not recruiting 7 footers just to play 1-2 games per year. All I'm saying is there are certain trends of roster makeups that tend to win titles. We were actually very close to that style in Buzz's final year. One Chris Clarke away from a final 4 team IMO and one more piece away from talking titles IMO.

We're gonna have some good teams with Mike Young. This year and beyond. I just find it really cringe when I see fans are just like "yay we're tall" and "who knew, tall guys make your team better" and all this stuff. To be completely fair, I will admit that I simply do not like traditional big men in terms of their style of play, so I'm really really biased here. I feel they slow down the game too much, they can't effectively switch onto guards which kills you defensively, they clog up the paint, they usually turn the ball over way too often relative to good passes, they usually can't run the floor, etc, etc, etc.

Blackshear or Aluma type bigs can be very good, hopefully Patrick can be even a little similar and have lots of success in Blacksburg.

I think the goal is he will be the next Aluma (or Kevin Durant)...

So... A Chris Clarke and Landers Nolley away from winning a title?

Most big guys like this are pretty skinny and get pushed around in the paint but this kid looks pretty big so if hes as good as they're hyping him up to be he might get some playing time next year.

Let's not get over our skis here. I think he has a lot of potential, but that potential can only be harvested if he puts the work in. I would be surprised if he's a 10+ min/game contributor next year.