Virginia Tech looks to improve its tournament resume down the stretch. 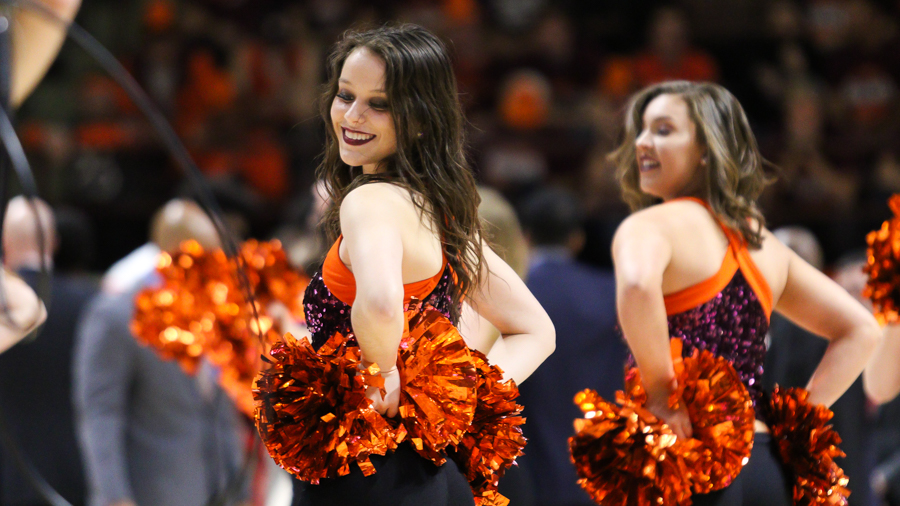 It's a weird thing to say after a 22-point loss, but Virginia Tech had a successful road trip. The Hokies won a thriller over No. 2 1 Virginia and suffered a thorough loss to No. 12 Duke.

Let's be honest. If I told you last week that the Hokies would beat the Cavaliers and then get blown out the Blue Devils, you would've taken it in a heartbeat.

And that's what happened. The blowout loss leaves a bad taste in fans' mouths, but in the long run, it was a good stretch by Buzzketball. Tech currently sits at 7th in the ACC, good enough for a first round bye in the ACC Tournament.

Up next is a road game at Georgia Tech and then a clash in Cassell against No. 11 Clemson.

I won't bore you with the details from this game again. Get caught up and read my dispatch from John Paul Jones Arena. If you're anything like me, you've already rewatched the game. And then rewatched it again.

The Hokies gave the 'Hoos a dose of their own medicine. Tech focused on defense, clogged the lane and forced Virginia to take an absurd amount of three-pointers.

It was easily the best defensive performance of the season, as Tech held the No. 2 team in the country to their worst shooting night of the season.

The victory in Charlottesville is a huge boost to the Hokies' tournament resume. It's a Q1 win and a triumph over the eventual No. 1 team and overall No. 1 seed. This win will only get better as the season progresses.

For as good as Tech played in Charlottesville, they played equally as bad in Durham.

And you know what? That's okay.

Imagine if Tech had won. The hype train would be barrelling off the tracks. It would be easy for Buzzketball to look past the upcoming games with Georgia Tech and Clemson. They'd be ranked on Monday. A higher seed in Bracketology. Fourth place in the ACC.

But now, with a blowout loss fresh on the players and coaching staff's mind, I can only imagine how focused the team is.

And as Buzz Williams pointed out postgame, the Hokies played three games in 10 days, with just two days of rest. Tech seemed tired and worn out in Cameron on Wednesday night, and I don't blame them.

One final observation from the Duke game: If the Blue Devils play like they did against the Hokies for the rest of the season, they will win the national championship. Plain and simple. Do I think it happens? No. But Duke flashed their potential.

I don't know why, but I'm very uneasy about this game. Georgia Tech isn't a good basketball team. But with Williams at the helm, every game between the two has been decided by 2 points or less, albeit 3 wins.

The Yellow Jackets lost one of their best players last week. Jose Alvarado is out for the season with a dislocated and fractured elbow. How important was Alvarado? Prior to his injury, he had played 197 straight minutes.

Sophomore Josh Okogie will step in to fill the void at point guard. Okogie scored 29 points, grabbed six rebounds, and dished out four assists in relief of Alvarado against Duke.

Ben Lammers, the star for the Yellow Jackets last year, is nursing a knee injury. Sharpshooter Curtis Haywood II is out for the season with a stress fracture. When Alvarado went down, Georgia Tech had to turn to two freshman to bolster their rotation back up to just seven players.

Long story short, the Yellow Jackets are banged up. They're 4-9 in the ACC. They've lost 4 in a row.

And yet, I'm still wary.

Virginia Tech has to come out and establish they're the better team early. They can't let the Yellow Jackets hang around and gain confidence.

Clemson is really good. Surprisingly good, honestly. Without their best player — Donte Grantham — the Tigers have established themselves as a top-tier team in the ACC. Sitting at 20-5 (9-4), Brad Brownell has improved his squad from a disappointing 17-16 (6-12) campaign last season.

So how good exactly is Clemson? In the various ratings, the Tigers are No. 6 (RPI), No. 16 (Pomeroy), and No. 26 (Sagarin). A victory over Clemson would be a huge boost for the Hokies on Selection Sunday.

It won't be easy. Four of the five Tiger starters average double-figures scoring wise, led by junior guard Marcquise Reed. Reed plays 34 minutes a game and scores 16 points per contest. Gabe Devoe is the resident marksman in Clemson, SC. Devoe is averaging close to 44% from deep. On the boards, there isn't a huge threat. Clemson's leading rebounder, Elijah Thomas, only averages 7.6 rebounds per game. Thomas only plays 24 minutes on average as well.

Clemson rolls out a small lineup, with none of their starters standing above 6'9". In fact, the tallest player on the Tigers' roster is 6'9". Tech will have to come out and take advantage of a smaller lineup.

The Tigers blew an 18-point lead on Wednesday and lost 79-81 to Florida State. Clemson hosts Duke on Sunday night prior to its trip to Blacksburg. It's entirely possible that the Tigers will be reeling and pressed for a win in Cassell. That can be dangerous.

anyone else feel like we have some sort of sick demented guardian angel going out and injuring key players (no, not that kind of key player) on opposing teams? I can't remember a season where we had this many ACC games where discussion of key starters' injuries was so prevalent before so many games.

Last year, we were the team that lost Chris Clarke at this point. I think it just happens

We also don't have dream because of some weird off season events and Ty is injured so I don't feel too bad. But it is weird timing. Just imagine if we had Ty right now to take over for Meds shooting drought.

Speaking of Ty was it ever reported whether he got his medical waiver approved for next season?

I haven't heard anything. Not sure what the rule is on getting two medical redshirts since he got one his first year here. He has been cleared to practice with the team though.

If you lose two eligible years to injury, you can apply for a medical hardship waiver. If granted, you get a 6th year to play your 4 years of eligibility.

Win at GiT, and beat Louisville at home plus one of @UM, Duke, Klempson and I'll be happy headed into Brooklyn.

Tech will have to come out and take advantage of a smaller lineup.

I wish I could say that I read this article, but I got distracted by the hightechs.

Clemson hosts Duke on Sunday night prior to its trip to Blacksburg. It's entirely possible that the Tigers will be reeling and pressed for a win in Cassell. That can be dangerous.

I'm going to play devil's advocate and say that they could also be tired, both physically and mentally and have a lingering hangover despite the outcome of their game. Therefore, I think we can catch them at a good time regardless.

I really wish Med could get out of this shooting slump, but I don't think he will unless an injury happens to someone in the rotation. Last year, Ty Outlaw had a horrible shooting stretch at the beginning of the season decreasing his playing time. When Chris Clarke got hurt and Outlaw's playing time went up, that's when Outlaw started shooting the lights out.

Word in the twitter world is that Malcolm Delaney will be at the Georgia Tech game.

We can use him!

I've been very impressed with the continued good play on defense. Even in the blowout loss to Duke, it was the offense that let the Hokies down (something that hasn't been the case much this season). To only give up 74 to Duke with the way that team was shooting actually says something. Then you follow that up with a game against GT where they 34 points half way through the second half.

If VT can keep up the defensive intensity and continue playing efficient on offense I'm really optimistic for the home stretch. I'm looking forward to making the trip up to Cassell for the Clemson game!

It speaks to the depth of the conference that, with 4 games remaining, Tech would be 1 win from the double bye and 1 loss from the first round.

Hey fellow TKP'rs...I never post, and usually just read (and laugh) at a lot of the back and forth on these boards. I love the content on here, and appreciate all that goes on to make TKP the place it is! I posted this over on TSL, but wanted to share this with you guys as well. I've been a loyal Hokie since the early 80's when I was just a kid. Been to countless games in Blacksburg, Clemson in '84 (when Bruce and the Fridge were seniors), Music City bowl in '98 (Brrr!), season ticket holder MV1's RFr year (and several years afterwards till it got too damned expensive), the Belk bowl last year, got back up to Blacksburg this past year to see us trounce UNCheat. Happy to say I will be attending my very first Hokie basketball game tonight in my 46 yrs of existence. I usually pace back and forth in front of the TV during Tech BB games...so I have no idea how I'm going to sit still. It's a 2.5 hour commute from SWVA / East TN...but I will be making the trip up tonight with my parents. Hopefully the good guys will pull off the victory. If not...it will be all my fault, and I won't attend any more BB games! /s

You know have to go to every single home game for the rest of your life if you want us to win. :p /s

If yall get there early enough hit up PK's. We got a small group going, thats usually the pregame spot for us.
Wing bite Wednesday tonight!

Here's to hoping Hokies get some serious abs after this crunch time.