Despite a strong start, the Hokies couldn't overcome their mistakes and fall to Louisville 68-52. 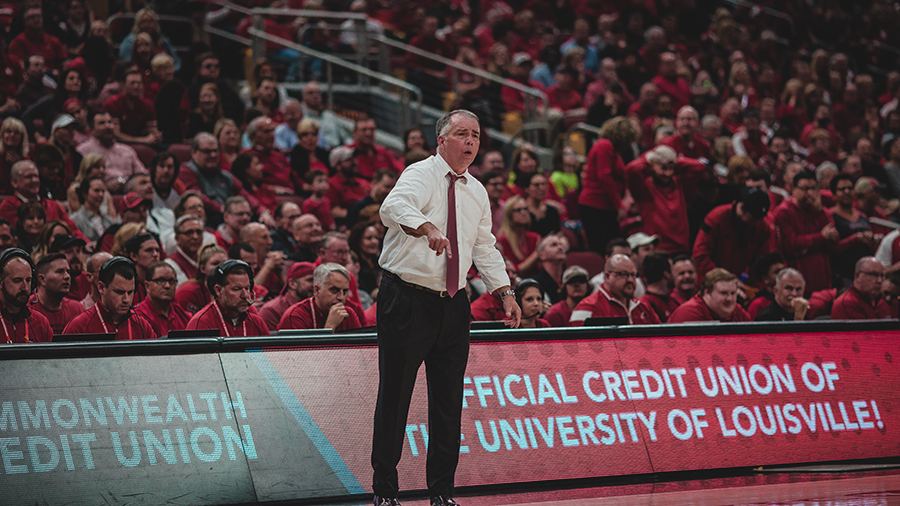 On January 23rd, fresh off a double overtime thriller against North Carolina, the Virginia Tech men's basketball team was 14-5, with a 5-3 record in the ACC. They were hot–surprisingly so, considering their lack of size, experience, playmaking, and defense–and found themselves on the way-too-early tournament bubble.

Just five weeks later, fortunes are a bit different in Blacksburg. The Hokies traveled to Louisville desperate to both clinch an above.500 season and find some semblance of a consistent identity. It's been a rough month for the young squad, mixing a few blowouts with a bevy of backbreaking losses. Just think about some of the ways Tech has fallen recently:

January 25th:They blew a 12-point lead at Boston College despite the Eagles shooting 40 percent from the free throw line.

February 8th: Lost again to BC, this time in overtime, despite 29 from Landers Nolley. Down two, the freshman missed a questionable three with 10 seconds to go.

February 19th: Lost to Miami in triple OT despite having the lead with less than 10 seconds to go at the end of regulation, first OT, and second OT.

Young squads need to face adversity to set their foundation for the future, and this one is no exception. But losing's not easy, and the more you do it, the more it can make you question things. Players can get skittish, double down on mistakes, or forget the little things it takes to win–blocking out, for example–and coaches can start to doubt their rotations and plan of attack.

The Hokies put these types of identity issues on full display in their 68-52 loss in the KFC Yum! Center.

In the first half, Tech went punch-for-punch with the Cardinals. They found open shooters with ball movement and screen action. Jalen Cone and Nahiem Alleyne rocketed around multiple picks, hitting quick triples to take an early lead.

But when the shots began to cool, mistakes multiplied. A bad turnover here and a defensive gaffe there lead to stagnation on both ends of the floor. An early second half lead quickly melted away into a 10-point hole, which then ballooned to 17 as things got out of hand.

"I thought we were in good shape at the half," Mike Young said postgame. "We never turn the ball over and then we had seven first-half turnovers and 16 for the game, which negates our play on the perimeter. They shoot the basketball so well and we limited to two made 3s at the half. But we shot ourselves in the foot and kick it seven times, which is just unnerving. We had some turnovers and bad shots to start the second half and then you're down 10 and you've got a problem."

The Cardinals are loaded with veterans and played like it from the jump. Even when Tech got hot, they never panicked and stuck to their script. Jordan Nwora eviscerated the Hokies inside, shooting 75 percent from two (he did Tech a favor any time he took a triple), and Louisville relentlessly attacked the basket as the game wore on.

And while Chris Mack's game plan methodically ran his opponent out of the gym, Young's seemed to change with his personnel. A young group of Cone, Alleyne, Hunter Cattoor, Tyrece Radford, and a big (either P.J. Horne or John Ojiako) felt active and fast, if not always efficient. Cone would move masterfully between screens and make plays on the perimeter. And while not the most adept defensive grouping, the youngsters did well to hold their own.

Ball movement all-but stopped with Nolley on the floor, as Tech resorted to more isolation-heavy play. Nolley seemed pressed to make an impact, and often found himself taking contested shots in the post. The Hokies' leading scorer finished the night with just six points on 2-9 shooting, and even more disturbingly failed to contribute in any other way.

At his best, Nolley is a difference maker. Even when his jumpers don't fall, the wing can still make his presence felt. He can grab rebounds, act as a secondary distributor, and even show up defensively. But on Sunday night he racked up just one board and one assist, while giving the ball away five times. Despite the struggles, Young has the same message for his forward:

It's been a puzzling stretch for the redshirt freshman. He was influential in the Hokies' win against Pittsburgh and near-win vs Miami, despite shooting a combined 7-36 (19 percent) in the two contests. But in the last three outings, he's been a ghost:

Is this the freshman wall? Him not adjusting well to the emergence of other scorers? The emotional toll of the losing streak? Maybe. But it could also simply be the wear and tear of a young player forced to bear too much of the scoring load since November. But whatever it is, it isn't the Hokies' biggest problem.

Louisville may be the best team in the ACC, but they also worked harder on the court, an unrecoverable sin when you're trying to make up as big of a talent gap as Tech. There were bad shots, horrid turnovers, and a group of young guys who play like they know exactly how many games they've lost in the last month.

"They made the winning plays," Cone said. "Like getting your team second chances on the offensive end, getting stops. There were sometimes when we got stops but would take some bad shots and some of that is on me. I took some bad shots and put my team in a tough situation. But they had more winning plays than us – more offensive rebounds, hustle plays. They came down with the 50-50 balls, just got about all of them. We've just got to get tougher."

It's only natural for a roster heavy on underclassmen to press as much as they have. But it's hard to see it getting much better the rest of the way. Though some may still be holding onto the hope of an NIT bid, maybe the best thing to happen to this young group is a fresh start next season.

It's frustrating to see other teams get preferential treatment on refereeing. We were getting call for ticky tack (far less than what 'ville was doing to us) fouls and Louisville was able to physically shove us around with not even the hint as the referee blows the whistle.

The calls on Cattoor and Cone were especially egregious. Plus, all night long they were getting three steps to the basket. But they're Louisville, so I guess its okay.

TV Teddy needs to be retired.

I wince whenever I hear TV Teddy is at the game.

I remember thinking I must have seen it wrong when they called this foul... Incredible

It's frustrating to watch us not have much of an offense besides jacking threes. Shooting ~30% on those ain't gonna cut it against anyone. Really hoping Young will change up his strategy next season because we'll definitely have the guys for him to do it

You aren't going to like the Wofford tape over the last 20 seasons.

From sweet 16 to not even making the Not In Tourney?

That's pretty much what we expected in April 2019. It's those darn early season wins against good teams that are driving any negative feelings about the reality of this team.

We need to be willing to drive the lane and take the fouls. None of our players, except for possibly Radford is willing to go inside hard and face the opposition's big guy. Time will tell as these young players age.

I really just don't think that's a strength of this team. Cone's size makes that tough for him and Nolley really struggles when he has to put the ball on the floor to create a shot. Besides Radford, Alleyne is about the only guy thats looked even somewhat comfortable getting to the basket at times this year.

Your assessment is spot on, but they need to play a full game, not just a shot-around (and run back on D). You forgot Bede's dribble circles around the court (and under the basket) but never pose a threat to shot. Why guard him?

It's past the time to put on your big-boy pants.

It's like we hit a wall 3/4 through every game

I eagerly look forward to the day when CMY and VT hoops notch a win over Loserville. Preferably in the next few years.

The in-conference advanced metrics for Nolley are brutal. He's 9th on the team in win shares and 10th in WS per 40 minutes

Kind of off-topic, but this is the type of coach/boss/partner you want in work and life in general. Sometimes you do everything right and the shot just doesn't fall.

The only problem is based on play, we are a better team without Nolley than with Nolley.

I don't necessarily care that Nolley has been missing shots. His jumpshot isn't broken like Horne's, and we know he can shoot. What I do care about is the fact that he constantly breaks up good ball movement by isolating against his defender. He isn't a good enough dribbler to be doing this, and three times yesterday he turned it over trying to do too much.

The team has been much better without Nolley in the game recently. Like I said, it's not because he's not hitting his shots. If he simply went into the game and stretched the defense but didn't necessarily shoot very well, he'd still be doing a lot better than how he has been just dribbling into turnovers. If this team wants to turn it around in the final games of the regular season and win a game or two in conference, we need Nolley to play within himself.