Virginia Tech completed the season sweep of the Tigers and closed out the regular season in Cassell with a 70-58 win. 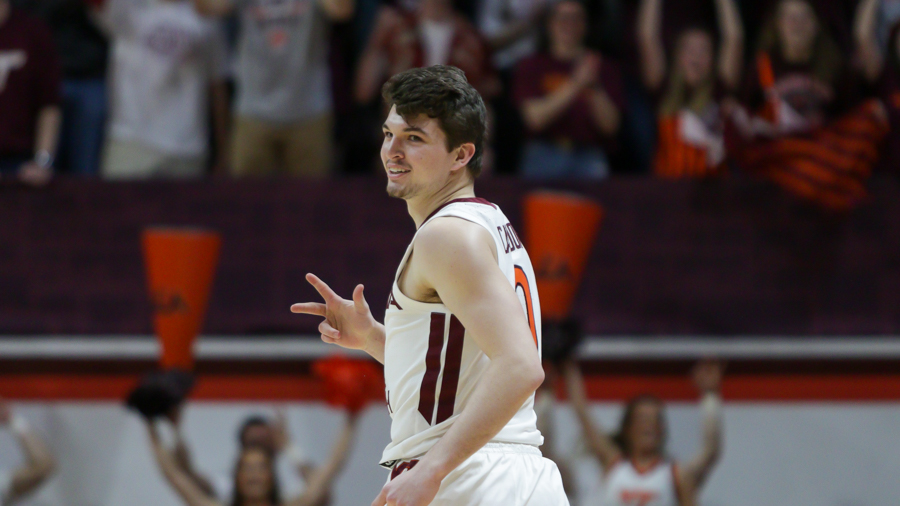 It's not hard to find motivation when you've lost four in a row and nine of the last 10.

But when Virginia Tech looked at the scouting report for Clemson this week — a team that had won four of its last five, including an upset of No. 6 Florida State on Saturday — the Hokies had to be wondering how much had changed between the two teams that met in the season opener.

"It feels good because Clemson's a good team," Tech forward Tyrece Radford said. "They were hot. They beat the top three teams in our league and have been playing well. Coming into this game, they were on fire. We had to put the fire out and we did that."

In the final game of the season at Cassell Coliseum on Wednesday, the Hokies brought back a sense of joy to the fans in attendance with a 70-58 ACC victory. That type of excitement around a win hasn't been felt since close to the first time these two teams met in Clemson on Nov. 15.

Oh, how the fortunes have changed for both squads though. Since that meeting, Tech went in a free fall toward the bottom of the ACC standings. The Tigers, meanwhile, have been an up-and-down team that has struggled to maintain consistency throughout the season but was tangent to the bubble. When the two met for a second time, however, all of that seemingly went out the window once again.

"We beat a good basketball team tonight," Tech first-year coach Mike Young said about the Tigers. "I watched them on film a lot over the past couple of days. They mauled Louisville, beat Duke and beat Florida State in fine fashion. .... To turn the ball over 12 times in the first half, I couldn't believe that statistic and we were still up five somehow. Three of those were offensive fouls and we have put a real emphasis on doing a better job screening. We did that, but we walked ourselves into a couple of tough situations. All in all, it was a good night for our team. I am really proud of our team. We battled through some things and stayed the course and found a way to get out of here in our home finale in Cassell. I am really proud of our bunch."

There was one particular run in the second half that brought flashbacks of the young, sharp-shooting Tech squad we saw early in the season. Trailing 42-41, Jalen Cone drilled a 3-pointer and Tyrece Radford drove down the lane for a score on the next play.

Just a few moments later, Hunter Cattoor shocked everyone inside the arena with a vicious two-handed dunk in transition and then nailed a triple before Cone hit another. By the time the Hokies were finished with the 13-0 run, they led 54-42 and were never threatened from there.

"He said if it's a good shot, then he lets you take it," Cattoor said of Young's philosophy. "He's never going to say anything about a shot unless it's a really, really bad shot. But if you're feeling it, and you're open, just let it fly. As long as you hit, I think he's pretty happy."

It was another strong game for Cattoor, who finished with nine points and seven rebounds in 17:05 off the bench. He has now hit six triples in his last two games and after originally committing to Wofford with Young before making the switch to Tech, the move has paid off.

"They don't know what the hell they're talking about," Young said of critics that said Cattoor didn't belong in the ACC. "That's why bankers need to stick to banking, [Roanoke Times sports writer] Mark Berman needs to stick to writing and I'll stick to coaching. That's a stupid comment. I said when we got him last fall, I told my staff, 'I think that kid can play anywhere in the country.' And I come here, thank goodness, April 8th — I remember sitting in that office. I called him on Sunday night before I was introduced Monday. I told him what was going on, 'Please don't say anything, this is just between us, but I want you to come.' Fortunately, that was a pretty easy recruitment. We had gone down that path, we had a pretty good relationship. I love his mom and dad, and he is a great person. Character wins. Kids that can shoot the basketball and that are tough win. That kid has had a darn good freshman year and he's going to get better and better as we go along because he cares and it's important to him. That's about all I have to say."

Another bright spot for the Hokies was junior forward P.J. Horne, who has suddenly caught fire again from 3-point range. He led Tech with 17 points and also tied career highs with four triple and five steals. It was the type of performance Tech will need in the ACC tournament next week.

"Just taking care of the ball and moving the ball a lot," Horne said of the difference. "Making sure we shoot great shots instead of good shots, and just playing as a team. It feels really good. I feel like we can carry this momentum on to the next game and try our best there to get the win. It's just confidence, having confidence and shooting the ball. Plus, making sure my teammates trust me to shoot the ball and making sure that on the floor we play hard."

Young said he was satisfied with Horne, Radford, Cattoor and just about every aspect of the Hokies offense. While Landers Nolley continued to struggle (2-for-9 for seven points), Radford had another strong all-around contest with 16 points, six rebounds, four assists and a steal.

"Just a level of toughness and a level of hard-nosed basketball," Young said of what Radford brings to his team this season. "You know what you're going to get night in and night out with him. He leads our team in rebounding and he's 6-foot-1. He goes in there in traffic and he snares these three [rebounds] tonight on the defensive end. Just that, he scores just out of the flow of things. He runs in transition, he slashes when there's dribble penetration and his man turns his head to watch the ball. He's a really good offensive rebounder. I don't know if he had any of those tonight. Just a basketball player. There's no other way to describe it."

After turning it over 12 times in a sloppy first half that saw Clemson jump out to a 9-2 lead behind back-to-back-to-back triples, Tech cleaned it up in the second. In fact, the Hokies finished with just 16 turnovers for the game and Wabissa Bede dished out five assists.

"When that thing goes in the basket the game is a heck of a lot easier," Young said. "P.J. Horne making four [3s], Jalen Cone has just been banging out shots night in night out, Nahiem Alleyne hit one in the first half on a nice extra pass from Landers Nolley. We had that nice distribution, and here comes Tyrece Radford slicing to the basket, he scored 16. When P.J. Horne has the ability to step out and make multiple 3s, that makes us tricky to guard. For him to make four, that's difficult. I rank Clemson up there with the top two in our league for half-court defense. I was pleased with how we cut, passed and screened. Then certainly, putting the ball in the hole."

On a night that Tech's lone senior — graduate transfer Branden Johnson — was celebrated prior to the game, it was the youth that shined through and gave Tech a much-needed win.

With one more game to play, the Hokies currently sit 10th in the ACC standings and wouldn't play until the second day of next week's conference tournament. That should provide Tech enough motivation for its season finale on Saturday on the road at Notre Dame. With a win there, it'll clinch a first-day bye.

After getting back to their old ways in a convincing win, the Hokies have confidence. Now we'll see what they can do with it moving forward through the remainder of the season.

"We give it to our fans; wins, losses, they always tell us we are going to get the next one," Radford said. "They got high hopes in us and that focus on this game was big. We just came to play and we pulled it off."

It seems Mike Young heard my pleas! Bede needs to shoot when he drives under the basket, the team needs to be willing to drive to the hoop and take the fouls, and do some rebounding (not shoot and run).

Good team effort and win! Keep it up.

Radford is the work-horse of the team!

Don't really think there was much of a change in our gameplan. A ton of baseline screens trying to set up Cattoor and Cone or a high ball screen with a pick and pop by Horne. When they tried to combat that pick and pop by going zone, we tore them apart and went 12 of 26 from deep. Radford is still our only real threat to get to the basket and was definitely a matchup problem for Clemson last night. I actually thought we did a lot better last night at trying to get some points in transition than we normally do.

What an awesome atmosphere in Cassell last night considering it is exam week and the team was going into the night 15-14 on Senior Night (with only 1 senior).

I'm glad I was able to make it to 10 home games this season. Mike Young just feels like what Virginia Tech basketball is supposed to be about and I'm really excited for next season after this team gets a whole offseason together.

considering it is exam week

Well written article man and what a nice way to finish the regular season.

Who was saying that Catoor couldn't play in the ACC? Was it Berman? If so, I don't know how more direct you could be..lol.

I really like Mike Young. If ever see him out, I'm buying him a cold beverage...

MIke Young has had enough of Berman, like the rest of us.
Hey Berman:

The only thing that could have been better is if he had said "Berman should stick to the kiddie rides" instead of writing. #BermanIsShort I love how the entire bench jumps when Cattoor goes up for that dunk.

can we make every day senior day at Cassell?