Mike Young wrapped up his inaugural season as Virginia Tech men's basketball coach, with hope for a Year 2 leap. 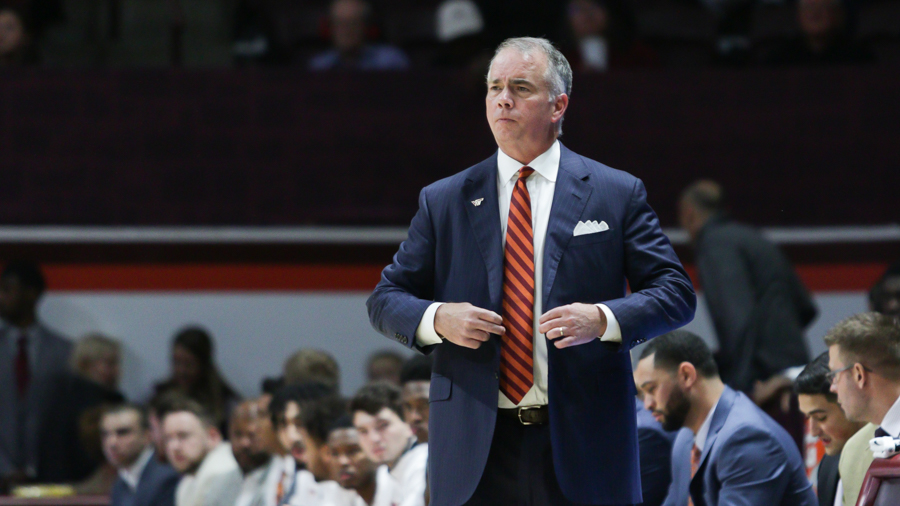 Look at the situation Mike Young inherited, and it's hard not to be encouraged by the result.

Sure, the back-to-back lopsided losses to Dayton and BYU at the Maui Invitational after an upset of No. 3 Michigan State were rough. The extended losing streaks and dropping 11 of its last 13 overall were certainly less-than-ideal moments, too.

Isn't that what we expected from this year's Virginia Tech men's basketball team, though?

Optimism is a great trait to have and something fans certainly gained more of after a fast start under Young, who took over a job that he called "home" after a long and successful stint at Wofford. But let's remember what the veteran coach was working with — a roster that featured zero seniors.

Tech's roster was left ripped apart after former coach Buzz Williams left for Texas A&M. Nickeil Alexander-Walker left early for the NBA, Ahmed Hill and Justin Robinson graduated and Chris Clarke (Texas Tech) and Kerry Blackshear (Florida) — who, by the way, would have provided some much-needed size to this year's edition of the Hokies — each transferred.

That left Tech with just one player above 6-foot-7 on the roster — a 6-foot-10 forward from Nigeria in freshman John Ojiako. It also forced one of the Hokies most talented players, 6-foot-7 forward Landers Nolley, to play in more of a low-to-mid post role rather than on the wing.

At the end of the day, Tech's hot start quickly fizzled. The Hokies finished 16-16 and below .500 in ACC play (7-13), losing to North Carolina in a rout in the opening round of the conference tournament in Greensboro on March 10.

Young deserves a lot of credit for that, but also recognize the two most experienced players on the Virginia Tech roster this season — P.J. Horne and Wabissa Bede. For each of the past two seasons, the two had served as role players off the bench and were suddenly thrust into important leadership positions this season in the blink of an eye.

The result, however, was pretty impressive. Bede's relationship with Young and the head coach's reliance on the point guard to lead the young Hokies quickly became one of the feel-good dynamics of this year's team. Although Horne struggled at various points with his outside jumper, he often played a big part when Tech did win games.

"He's the one old guy I've got," Young said after Tech's ACC-opening win over Clemson in December. "I rely on him. He's my buddy – 'Don't go anywhere, kid.'

Statistically though, it was the first-year players who led the way. Nolley had a strong overall year, earning a spot on the All-ACC Freshman Team. But he announced soon after the season that he was entering the transfer portal out of a desire to play in an offense where he would be utilized as a wing more.

Nolley averaged 15.5 points, 5.8 rebounds and 2.4 assists per game. Although he averaged 2.6 more PPG against non-ACC opponents (17.18 vs 14.57) and his points per minute dropped from 0.610 to 0.466 in the same contests. He struggled to get into a rhythm offensively for a majority of the second half of the season as his 3-point efficiency faded. Ultimately, his Effective Field Goal Percentage (which accounts for three-point shots worth one more point than twos) declined from 0.530 to 0.402.

Still, that wasn't a terribly devastating blow to the Hokies — although it will hurt. Though over the course of the entire season, the play of gritty forward Tyrece Radford distinguished himself on the court the most for the Hokies. The 6-foot-1 Baton Rouge, La. native quickly became a fan favorite in Blacksburg and averaged 10.2 points, 6.2 rebounds and 1.7 assists per game as one of the most efficient players in the country.

A pair of guards in Nahiem Alleyne and Jalen Cone — two guys that should have still been playing their senior years in high school, but opted to reclassify to play for Young a year early — became more consistent scoring threats throughout the year and finished third and fourth, respectively, by year's end.

And don't forget about Hunter Cattoor — a former Wofford commit that came over with Young and many questioned if he was even worthy of playing in the ACC. The 6-foot-3 guard not only came up with several timely clutch shots for the Hokies, but finished with an average of 6.5 points per game.

The bottom line is if any of those players did that on an experienced team, they'd be promoted as the future of the program. Tech brings all of those guys back, and more, and they each have significant on-the-court experience for future years.

Joe Bamisile and Darius Maddox are two signees that are expected to make immediate contributions next year. Class of 2020 forward David N'Guessan quickly filled the scholarship spot of Nolley, once he announced his decision to transfer, and Wofford transfer Keve Aluma will bring some size to the low post after redshirting this past season.

Tech is also active on the transfer market at the time. Most recently, the Hokies coaching staff has been linked to Kansas State win Cartier Diarra and Radford's Carlik Jones.

After fans were devastated almost a year ago about the departure of Williams — and deservedly so after he rebuilt a Tech program that had been in shambles before his arrival — many believed the Hokies were in for another long rebuild.

Instead, Young showcased all the reasons he was so well-regarded around the country prior to this season and gave Tech fans a reason for hope entering the future with a guy they can feel assured is in for the long haul.

"We start back with our spring workouts and it's not new," Young said. "We have done it. We know what we're looking at now. We know how things are going to operate and how we're going to run. And I am looking forward to that. I'll be honest with you now, there were times I thought I was hanging on for dear life trying to get a little bit more and we did. We had a tough stretch late January, February. This isn't the best league to be young and small in. As many of you that have covered this league for many years, I'm not sure that there's a league in America that's good to be young and small. We're going to look a lot different a year from now, I can assure you of that."

Great article, Cody! A very nice read, and it was nice to read something positive in the sports world, hell entire world, right now. Thanks!

Thanks for the write up...I hope we build on this

I like this take. CMY made a pretty fine meal out of some leftovers and few cans from the cabinet and met or exceeded everyone's expectations. I think this line says it all:

I'm not sure that there's a league in America that's good to be young and small. We're going to look a lot different a year from now, I can assure you of that

Once this roster has the right players to be able to put 5 guys on the floor to either match up or take advantage of the opposing team's lineup we should be able to win some of those close losses. Once we get a few years under some of these guys belts, we will see some of those sure-losses become toss ups and hopefully lead to tournament appearances for years to come.

"We start back with our spring workouts...."

Am I missing something here?

Quote may have been made before the lockdowns.

Very nice article. The future does look bright from a basketball point of view. I might even have to wear shades. I'm just happy we will have some height on next years team. Go Hokies!!