The Art of the Three 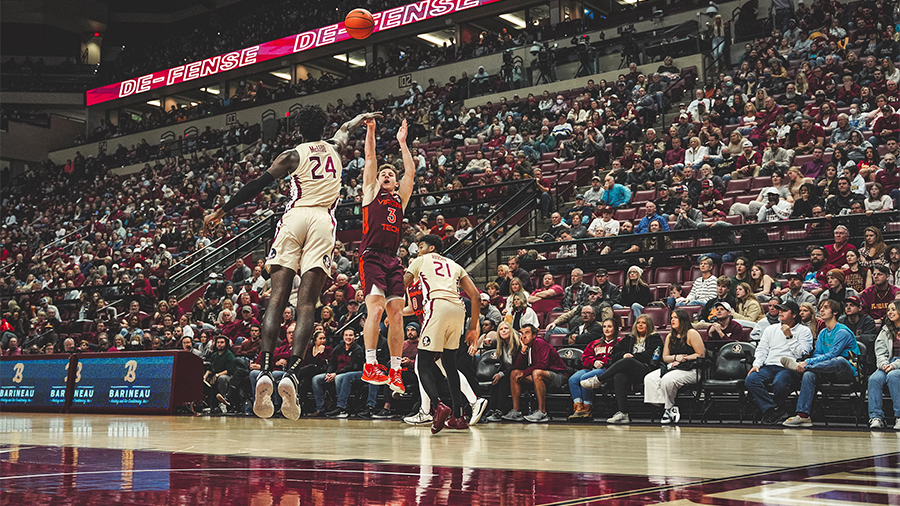 Following a heartbreaking, half-court buzzer-beating loss to Miami, the luck-starved Hokies dug deep within themselves and found a way to upend Florida State 85-72. Though the Seminoles were down three key players on Saturday, Leonard Hamilton's squad is as deep and athletic as any in America, and were playing inside the formidable walls of the Tucker Civic Center, where they have lost just five times in the past six years.

No matter for the visitors from Blacksburg, who won a road ACC game in which they were outrebounded by seven and shot 12 fewer free throws. The reason why? A herculean shooting performance in which Virginia Tech made 72% (18-of-25) of their three-point shots, tying an ACC single-game record for teams with as many attempts. Hunter Cattoor was responsible for nine of those triples, and Sean Pedulla for six. It was a shooting barrage the likes of which we may not see for years, and without which Tech may not have even won the game.

In an ironic twist, it was the Seminoles' size — the very thing which makes them so difficult to guard — that was their Achilles' heel. Tech exploited matchup advantages in the absence of Florida State's talented guards, torching them from every quadrant of the perimeter. This was a once-in-a-decade display of offense, but it furthers an old addage in sports: you create your own luck.

Take 'Em if You Make 'Em

As a general rule, Mike Young likes to shoot three-pointers. His best offenses at Wofford had high three-point attempt rates and were also very good at making threes. I previously discussed how Young is the master of the three-point shot: since 2014-15, no qualified coach has had teams that shoot better from behind the arc (38.3%) than the Radford, Va. native.

This year, it's been slightly a different story: while Tech has the second-best 3P% in the nation (41.2), they have seen a slight downtick in their three-point attempt rate. Instead of uber-reliance on the longball, Young has engineered the Hokies' offense to run through his bigs, as evidenced by the fact that Keve Aluma and Justyn Mutts have two of the three highest shot rates on the team, a stat that expresses shots taken as a function of minutes played. (Last year, it was Jalen Cone and Joe Bamisile leading the way, with Tyrece Radford and Cattoor also having more significant roles.) Rather than watch his guards struggle to create separation off the dribble, Young has been content to let Aluma and Mutts post up on the block and go to work. However, when you have a point guard that can penetrate, it allows for drive-and-kick opportunities which force defensive rotations and add more fluidity to the offense — just how Mike likes it.