Virginia Tech Basketball is More Dangerous Than Ever

The Hokies are dangerous, multi-faceted and good at doing the hard stuff. All of which is a pretty nice combination as the heart of the conference schedule approaches. 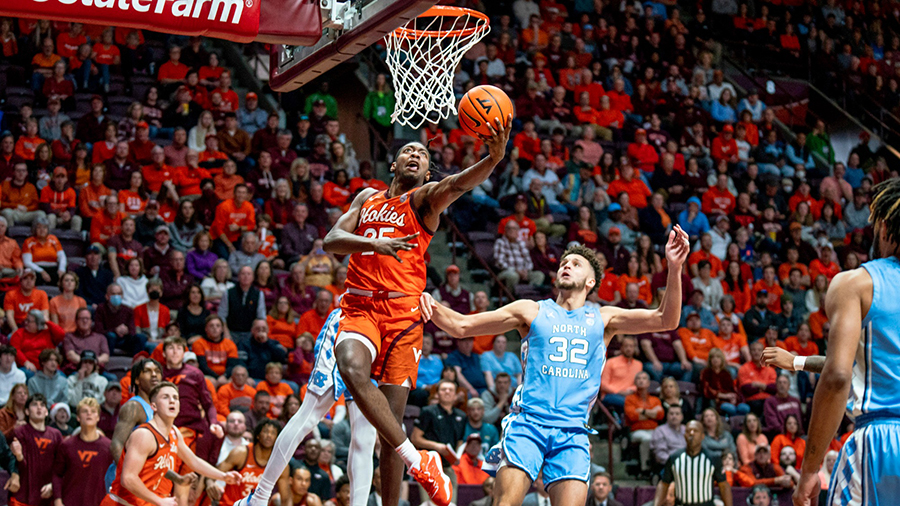 The Virginia Tech men's basketball team faced their first true test of the 2022-23 season on Sunday afternoon. And they passed with flying colors.

The Hokies beat up North Carolina in Blacksburg, destroying them on the block, hitting clutch threes at crucial moments and — most impressively — locking them down for the game's first 30 minutes. Yes, the Tar Heels were without preseason All-American Armando Bacot, but Tech suffocated the rest of Hubert Davis' McDonald's All-Americans with the ferocity of a TOTS bouncer breaking up some ruckus on a Saturday night.

Yes, they have holes, but the evolution and growth of Mike Young's program was on full display in front of a rocking Cassell Coliseum. Justyn Mutts dominated, Sean Pedulla showed that he's the one to trust with the ball in his hands at the end of a game and a couple of the young guys went from "oh yeah, they might be good" to legitimate rotation players overnight.

So what did they show that makes this iteration of Tech basketball so different? In college basketball a good team can do one or two things very well. For the last few years, the Hokies shot the lights out (they were third in the country in three point percentage despite shooting over 800 attempts). It was their calling card. Yes, Mutts and Keve Aluma could do other things, but the core of Tech identity was to shoot it.

And that strategy did a lot for the team. It kept them around .500 when they had no business being there. (If you ever once doubt Mike Young's ability as a basketball coach, go back and look at that 2019-20 roster.) It led them to two NCAA Tournaments and, if we're being honest with ourselves, an ACC Tournament title.

But, if you're trying to ascend to a new stratosphere, you need to be more than one thing. You need an identity, sure, but the best teams can be multifaceted. They can play their game, but they can also match up with whatever their opponent is doing. They can pivot mid-game to take advantage of how they're being guarded and what they're being given.

For the last few years, the Hokies didn't have that. Now, they have it in spades.