With big openings at DB looming, the Hokies are hoping to convince Burton to pick a different ACC school. 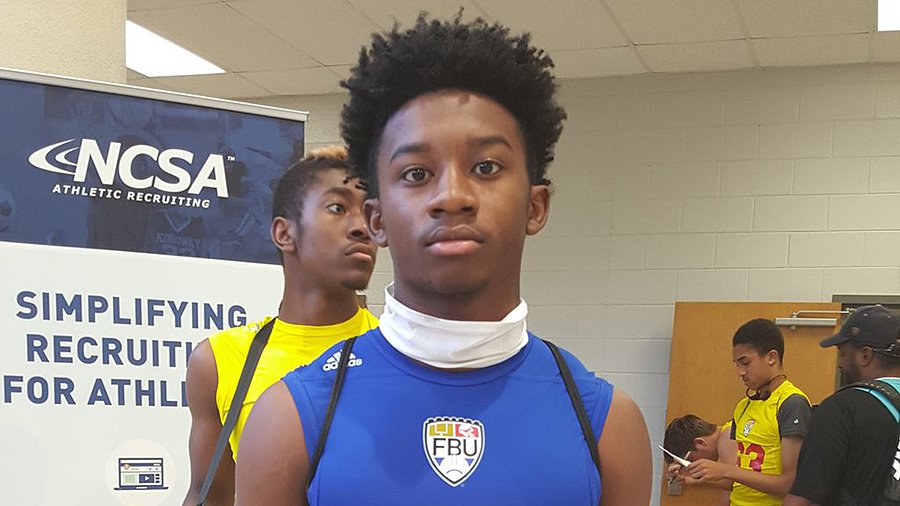 After a staff shakeup at UNC, a top out-of-state cornerback prospect is opening up his recruitment and giving the Hokies another look.

No, it's not 2018er D.J. Crossen (though the Greensboro, N.C. standout did return to Blacksburg last week). This time around, it's Donte Burton of Lawrenceville, Ga.'s Central Gwinnett HS hitting reset on his recruitment, with Justin Fuente and company in hot pursuit.

"I'm just looking, exploring my options to see what I have out there," Burton told The Key Play. "And Virginia Tech is definitely a school I will be thinking about, because UNC, at first they lost the coach that recruited me (former DBs coach Charlton Warren), then they lost their defensive coordinator, Gene Chizik, and stuff's up in the air right now. So I'm just exploring my options."

Like Crossen, Burton was committed to UNC for quite a while — he offered Larry Fedora his pledge last July — but he changed his mind on April 13.

That decision came just a few days after his very first trip to Tech's campus on April 1, though he says he's been thinking about the Hokies for months now. In particular, one big win for Tech in some monsoon conditions stuck out to the CB.

"I knew Virginia Tech, they were known for their defense, and I play defense, so that was a big plus on that end," Burton said. "And then I saw Virginia Tech, they beat UNC, and I was like, 'Oh dang.' So then I was really ecstatic about how they reached out to me and emphasized that I was a player of the caliber to come out there and play with them."

Burton says OL coach Vance Vice took the lead in his recruitment right away, and all of Tech's coaches had some "big things" to say about Blacksburg. Accordingly, he decided to see things for himself when the team invited dozens of prospects to take in an early spring practice.

"I thought it was a really nice campus," Burton said. "It was big, but everything seemed within range, so it seemed like you didn't need to go too far to get where you needed to be."

Like the rest of the two dozen or so recruits on hand, Burton got a field-level view of just how Fuente runs practice, and he came away especially enamored with how the head Hokie was "just having a good time with everybody that was out there."

"I got to see all the coaches and players just jumping around, having a good time out there in practice, how they do their day-to-day routine, how the players do their thing," Burton said.

He says he paid especially close attention to how CBs coach Brian Mitchell ran his drills and "one-on-one periods" for the DBs, to try and understand just how his prospective position coach operates.

"I feel like he's a coach that lets you have fun and play your game, but then he's a teacher and he teaches you when you make mistakes," Burton said. "I just feel like he could be a good coach for me."

Burton says Mitchell spent plenty of time with him during the day, and made one thing perfectly clear; the Hokies have some big needs in the secondary. Mitchell told Burton that "they're taking two safeties and two corners" in the 2018 recruiting class alone, and they won't be afraid to play those youngsters early.

"They feel like I have a great chance of playing early because a lot of guys there are leaving and going on to do bigger, better things, so that really opened my eyes to see I could be able to play as a true freshman," Burton said.

But the Hokies don't simply see Burton as a warm body — he says they raved about his fluid technique and believe he has the "speed and quickness to play at a high level." He's currently rated a 3-star prospect by the 247Sports Composite rankings.

Likewise, Burton thinks he'd fit perfectly in just such a role, since he feels "man-on-man coverage is one of my specialties."

And though he has trips to West Virginia and Pitt on the docket for the coming weeks, Burton is already planning another trip to Tech now that his recruitment is wide open once more.

"I'm not sure on an exact day, but I know I'm gonna be coming back up there soon," Burton said.

Quick, someone tell him how 'The Douche' throws his DBs under a bus on national television.

"And then I saw Virginia Tech, they beat UNC, and I was like, 'Oh dang.' So then I was really ecstatic about how they reached out to me and emphasized that I was a player of the caliber to come out there and play with them."

Those 10 wins last year were a HUGE boost in recruiting.

"And then I saw Virginia Tech, they beat UNC, and I was like, 'Oh dang.' So then I was really ecstatic about how they reached out to me and emphasized that I was a player of the caliber to come out there and play with them."

But it was raining so the result really doesn't matter.

My first thought too. Remember, it only rained on one team. You can chalk the 4 TD beatdown up to a slight statistical advantage to VT since it didn't rain on us.

A little surprised we only plan on taking 2 CB's this year...

I wouldn't worry about it. The numbers always work themselves out.

And who knows, maybe one would make a great OL?

Except when they don't and we don't have adequate depth you mean?

We've got a lot of talent in the pipeline already. I think our depth will be fine.

And when I said in the original response, i meant that "if they need more they'll take more and worry about the numbers later"

in the CB pipeline? We had to move over our most promising WR to play CB already.

Just taking more when we miss on all the primary targets isn't a very sound approach either. We'll see how they finish this class with DTs, OL and CB, but just assuming we'll be fine hasn't worked for us lately.

I think you're panicking for no reason. You need to calm down. Caleb to CB was always in the books even though I think he'd be a great WR for us.

Edit: Yes don't just take bodies for bodies sake, but I trust our coaches evaluation over yours.

Not panicking it's status quo. The staff for years, and yes we have a limited sample set for the new coaches, have not done a great job of scholarship distribution and filling holes.

Caleb to CB was not always in the books. I'm sure you trust all their evaluations even for kids that never sniff the field. I prefer to look myself and form my own judgement. No one is right 100% of the time, but just assuming everything will be ok is what got us in the 2011-2015 stretch and retired a legend HC.

I see what they mean by "lockdown" corner. Geez. I feel all claustrophobic just watching his highlight tape. #dbu

You know they have some talent when it looks like they are running the WR's route for them.

Thanks Bud for staying, thanks CJF for keeping him. May DBU continue!

your photo made me do a double-take to ensure it wasn't Nicholas Cage.