Outside the Top 8 to On Top 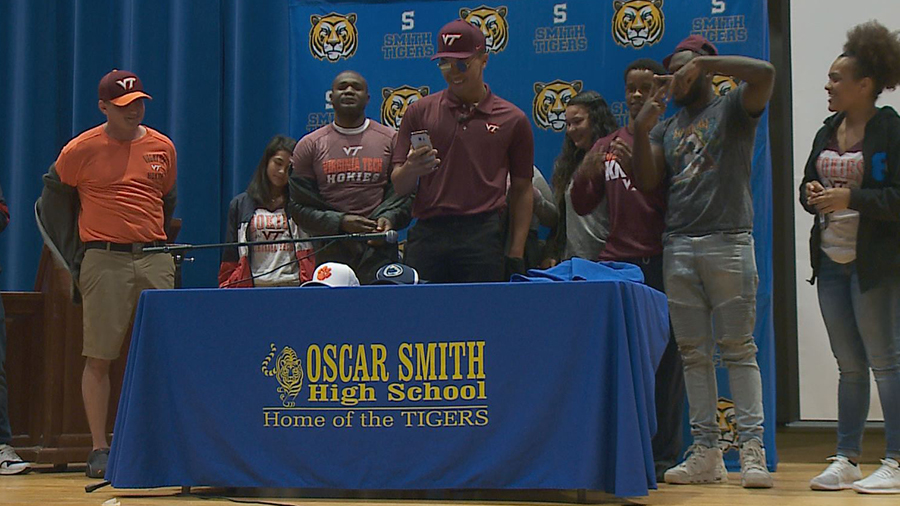 At this point, it's well documented the Hokies earned Cam'Ron Kelly's commitment despite an absence from the 757 blue-chip's top 8. Consensus among recruitniks was Kelly's verbal would ultimately be decided by a three-way battle among Penn State, Clemson, and Virginia. For every bit of the kick to the Hokie stones Devyn Ford's commitment to Penn State was, Kelly's shocker was a reciprocal amount of Sub Station II, turkey legs, RAILS for the soul.

So why — Why did Kelly stun everyone and pick Tech?

When it was all said and done, he wanted to play cornerback in college. That was important.

"When it came down to Clemson and Penn State, Penn State was a great school, Clemson was a great school," said Kelly. "They wanted me to play safety, my heart is at corner, so I wanted to go to Virginia Tech and stay home. It's a home environment for me, I know a lot of people there, and plus I get to play the position I love, which is corner."

That was a common thread amongst various interviews Kelly gave after his announcement.

"I made this decision based off myself, and where I would thrive at as a corner."

Moreover, Tech's coaches did not write his recruitment off, even when Kelly made official visits elsewhere and Tech was seemingly out of the running. A low-touch approach helped immensely.

"Every school sells you this, sells you that, but you got to look at the real, and who's not," said Kelly. "Because everybody's trying to show that perfect pitch. Honestly, Tech let me do my own thing, and then I always had a relationship with them. Everybody else was too busy selling their dreams. Selling this, selling that, selling that. I knew from personal experience with my relationship with the coaches at Tech, that this was real.

"There's no sale, no nothing. Come in and work, and do what you got to do, and put on for the state."

The epilogue of a unanimous 4-star recruit choosing the Hokies: talk of pipelines, recruiting other top targets, and championships. All that good stuff. Watch the interviews below. Take it all in. Then exhale slowly.

On a macro level, just like Ford's verbal to Penn State wasn't an indictment of Tech's total-output on the trail, this isn't a cure-all. But it's a hell of a coup for the Hokies and a leap in the right direction.

Point blank, the Hokies had the right message, delivered it impeccably, and it resonated.

"I'm firm with it," Kelly said of his commitment. "Virginia Tech is home."

The epilogue of a unanimous 4-star recruit choosing the Hokies: talk of pipelines, recruiting other top targets, and championships. All that good stuff. Watch the interviews below. Take it all in. Then exhale slowly.

"Every school sells you this, sells you that, but you got to look at the real, and who's not," said Kelly. "Because everybody's trying to show that perfect pitch. Honestly, Tech let me do my own thing, and then I always had a relationship with them. Everybody else was too busy selling their dreams. Selling this, selling that, selling that. I knew from personal experience with my relationship with the coaches at Tech, that this was real.

I didn't read it that way.

Every recruit is an individual. The same approach isn't going to work every time. I feel like 80 percent of recruiting is about selling. Finding the hook that is going to win a commitment from player X, then being willing and able to find a potentially different hook for player Y.

What's most important to me as a fan of VT is that the pitch is never dishonest.

finding the hook you say? hmmm..... I know a guy that will wash ALL 5* recruits laundry for them. rimes with slick raban

Now we just need some studs on the d-line. Stocking up 4*s at every other position on the D. Excited about the potential now that Foster is loading up on talent.

These interviews definitely make me feel better about his commitment. And once again, the trend we see is our coaches are just genuine through the recruiting process. I love hearing this stuff consistently from recruits. I know this came out of nowhere, but the way he talks about our staff and the team makes it sound like he really is happy with where he's at and doesn't want to play games with other schools.

We're consistent in our recruiting brand. When our brand resonates with a recruit it seems like there isn't much that the Big Dogs™ can do, but if it doesn't there aren't enough MV7 Twitter shoutouts in the world to compete with flashier recruiting pitches.

Exactly. It's tough because there are a lot of high profile recruits it won't resonate with, but for those that it does, we get them. It's kinda risky but if that message can start resonating with more recruits and we improve that way, I much prefer that to shady shit to try to improve as fast as possible.

Leg to you good sir for the Big Dogs trademark.

Such a boost after the previous month. It's good to hear a recruit talk
about authenticity and makes me proud VT comes off that way.

AND apparently JJ is NOT suspsended?

I wouldn't get too excited just yet. This is probably going to be driven by the academic side of the university. The Athletic Department is probably just waiting for the punishment to be handed down. In the mean time, he will continue to operate as a member of the team.

That's not what i'm reading on other sites, so hopefully you're wrong.

I don't care if we if bigger programs backed off, or we were a back up plan, yada yada yada. I'm sure there are plenty of amazing players that wanted to play elsewhere and ended up loving where they landed. He is certainly filling a desperate need for CB following recent unfortunate events.

lets be honest #DBU should sell it self. penn st and Clemson can get that weak sales pitch out of here like....

Which game is this and who is that player? Wow! What a play!

The defense was very sound that night.

Defense was good enough to win that game.

Pretty much the whole year. That defense was championship caliber

It doesn't hurt that VT defensive players go to the NFL and of all positions defensive backs have done well. One day we may get a big time running back, however, it's going to take a current running back getting touches and yards and/or getting drafted.

We have had excellent caliber RBs, WRs and QBs get drafted that unfortunately never panned out in the NFL. The NFL is a completely different game and you never know what you are going to get out of a drafted player until they hit the field (*Cough* Ryan Leaf Johnny Manziel *Cough*).

EDIT: Please lets not crown Saquan Barkley the greatest running back of all time just yet. PSU is riding his current success but the guy hasnt played a snap in the NFL, time will tell if he was truly worthy of the high of a draft pick.

Penn State has, historically, been one of the worst secondaries in NCAA. Their defense is geared toward strong LB play with an assist from the DL, and their DBs are weak. He made a good choice. Woo!