The Hokies added an explosive 757 stud to their 2019 recruiting class. 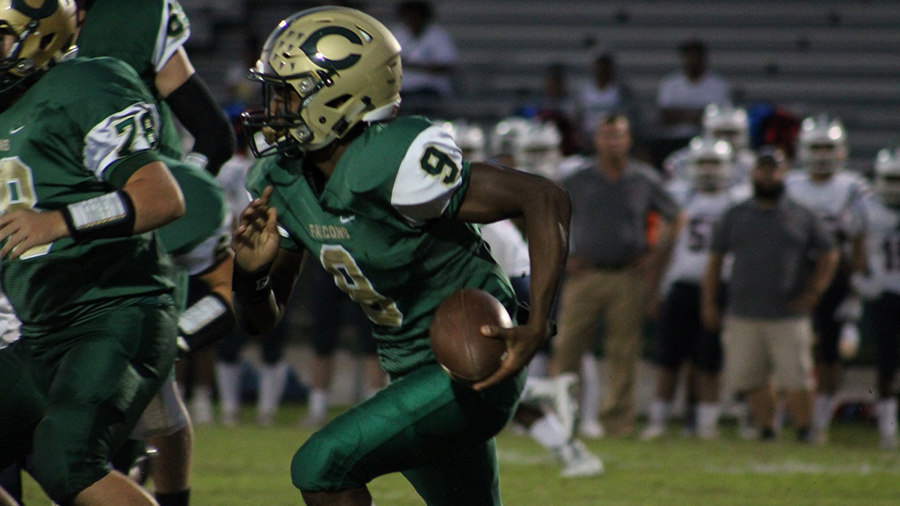 It's the Hokies for Tayvion Robinson.

The 247Sports Composite ranks Robinson as a 3-star (0.8820) ATH, WR, S. Though Rivals ranks the electric do-it-all skill player as a 4-star athlete. And that's not hyperbole either. Robinson racked up yards and touchdowns as a wide receiver, quarterback, and running back last season.

Robinson accounted for 1694 yards from scrimmage for Cox, playing quarterback (25 of 62 for 539 yards, 5TD's) as well as running back (174 carries for 1096 yards, 16TD's) and wide receiver. He also had 465 return yards, a special teams touchdown and three pick-sixes among his six interceptions from the defensive side of the ball.

That effort earned him Beach District co-offensive player of the year honors. He also straps it up at defensive back plus returns punts and kicks.

#3 - Any junior VA in having a better season than Tayvion Robinson at Cox? Accounted for 6TD's in win over Salem-VB. Mr. Versatility.— Matthew Hatfield (@hatfieldsports) October 28, 2017

Moreover, his play on the field has earned the respect of opposing coaches in the region.

"He is a dynamic playmaker," (Princess Anne coach Jelani) Fair said. "He is definitely a guy you want to have the ball in his hands."

Green Run coach Brandon Williams, who did see Robinson on the field, agreed.

"I truly think Tayvion is one of – if not the best – dynamic player not only in the Beach District, but the state," Williams said. "He is the type of athlete that can beat you on both sides of the ball."

Best player I have coached against picks his college today @RobinsonTayvion .... interested to see his choice ... with hard work ... the sky is the limit with this kid— Eric L Black Jr (@DlineCoach54) June 24, 2018

Robinson is the fifth addition to Virginia Tech's 2019 recruiting class in the month of June. Three-star 2019 TE Nick Gallo picked Tech on June 19. Three-star 2019 DT Norell Pollard went public with his Virginia Tech commitment on June 18. The Hokies added 4-star WR Jaden Payoute to their class on June 10. And 4-star CB Cam'Ron Kelly turned heads when the 757 standout pledged to Tech back on June 7.

Haha you had this up within about 10 literal seconds of his announcement. I love it.

Glad to have him!

Was Tayvion one of The Three?

I'm gonna take that as an enticing no

I'm pretty confident Robinson was a silent and that's just BAG's go-to GIF. I can't really see any way that he wasn't of the "three silents" seeing how we only have 3-5 spaces available. For the record I still think Simonds counted as one of them as well at one point.

I am very pleased. This kid has some serious ability.

That's the only opinion I need to hear. Sold

French isn't the only person on this site that knows talent when he sees it my friend. He is the man though!

You may be right, but how strong is their fishing game?

And are they team cake, or pie?

Damn this one took a while but glad to have him in the boat. Gonna start filling up fast!

Anyone know what position he wants to play or get his first look at?

Everything I've heard is slot receiver.

Absolutely love his tape. One of the top players in the state without a doubt and one of my favorites in this class. Very, very happy.

The rating disparity across the recruiting sites is interesting. Rivals has him at 6' and a top 250 player; 247 and ESPN have him at 5'10" and a mid-level 3*. That said, given his tape, I'm pretty sure I don't care.

Robinson, Payoute, and Bowick will all end up as 4 stars when it's all said and done, they all have serious talent. The same can be said for Pickeney or Hazel, so regardless of we get both it will be the best WR class in VT recruiting history and keep us stocked at WR for years to come!

I absolutely love our last two WR classes... but I really want Pinckney. To my untrained eye his tape is incredible.

"It's not just my position coach, but it is all of them. They all contact me and it isn't always about football with them, and I really like that."

The "it isn't just about football" refrain has become a regular talking point among our commits. I go back and forth on it - I love the personal touch and making it more of a life recruitment; on the other hand, I bet Little Nicky Satan doesn't give 2 shits about family/friends/the rest and that seems to have worked out fine for him hahaaaa.

End of the day, it seems to resonate with the kids. I like it.

Nah, this matters A LOT to most recruits. They're going to a place to live for several years where a lot of different things will contribute to their daily quality of life and experiences. More than just football matters, and VT 100% has to take that approach since we can't always sell what the "big dogs" can football-wise...

That would fit Tom Cruise specifically, not Naval Aviators in general. Though I did fly with a few who may have had more ego than brains. But still, flying combat aircraft on and off ships for months at a time around the world in often challenging conditions is not for the faint of heart. It will kill you if you don't pay close attention. Nuff said.

I imagine that like good Corners, they need a lot of ego. And I think they need to be pretty short, no?

The prick. is probably optional.

Is that what happens if Barney Rubble becomes a jockey?

Exactly what I was picturing in my mind, without Barney Rubble. Need some photochop experts to make this visual happen!

If only because the recruiter knocked off a few inches from the paperwork. I went in when I was younger at just shy of 6'3" and the paperwork they were going to send in said 5'11.5".

The June gloom has lifted...Devyn who?

Devyn "There's Still A Seat If You Want" Ford if I'm in Fuente's place.

He's got crazy jets when the ball in his hand. Oh what fun it will be seeing him wherever CJF puts him, offense, defense, special team...

His QB play reminds me of Tyrod, maybe it's just me

And whoever is #1 that he's throwing to, I want that kid too. He's burning everything everytime he lives up.

Don't know about the tyrod comparison, but totally agree on #1. Anyone know who he is?

I can see your tyrod comparison...very elusive in open space

The elusive part is about it.

That is a 40.3% completion rate. My guess is he is a victim of the coach putting the most athletic kid at QB to maximize his touches rather than maximize his talent. Assuming he lands on the offensive side of the ball, I think this kid will be deadly on the sweeps, screens, and slants.

Throw for show, run for dough?

That's what I was talking about. Definitely not a passer lol

Good quality pick up whatever position this kid plays he is going to excel. Smooth athlete.
Has a knack for finding that endzone

Very happy to get an electric player!...but someone please help a brother out, is this the kid that was "too small" a couple months ago? Or is that someone else? I'm so confused.

I think you're thinking of Tank Land.

Yeah, we had two Tayvions we were tracking.

Is this that recruiting momentum I've been hearing so much about?

Put him and Farley both back to return punts at the same time....

As someone who is listed size wise similarly to high school Greg Stroman, kid looks bigger on film than 160.

He makes really nice plays in open field and is deceptively quick.

Not often we get a kid from my alma mater. Last one was Derek DiNardo in 2010.

YOU CAN BEAT OUR FALCONS BUT YOU CAN'T BEAT OUR COX

I would have though that little slogan would have been the other way around.

Chants to 757 schools were the best.

Back when going to Benedictine was fun.

Don't get me started on that Bullshit fucking move! I got kicked out of meeting with the school over that and banned from their social media accounts.

On some levels, I understand the move. On their new campus, they have more space and can be self-contained. Where I work in Fairfax, Paul VI is going through a similar transition as they leave their Fairfax campus to move out to Loudoun.

But yeah, it is sad that a Richmond institution left the city boundaries.

So my issues with it: History parts of the building had been around since the school was formed in 1911, access to world class facilities right outside our door, Virginia Mueseum of Fine Art, Virginia Historcal Society etc we're right across the street, it was easier to get to from students of more diverse background (I was a lower middle class kid from South Richmond when I started there, now it's heared towards west end kids and athletes from the area), lies about plans to move and why they needed to, we were told numerous times the school wasn't looking at moving and if it did it would have alumni input it didn't the monks needed money and support out there to keep afloat and they forced the school out there to do it.

Now the building has been sold. The connection St Gertrude's is broken the connection to St Benedict's is broken, the gym ceiling which had names of alums going back the 40's written on it was painted over. There was space at the school to expand or renovate hell the parking lot could have been built on.

I see he wears #9 in HS so I was thinking who was the best #9 in VT history......and I was a bit stumped. I got:
Terrell Parham
Cris Hill
Brendan Motley
Khalil Ladler

We have to have had a better #9 than Hill, a solid starter his senior year. Right?

Who am I forgetting?

Or have we been unlucky with #9s?

No love for Brendan Motley? He was critical in 2015 when Brewer went down, and I think the bowl streak would be dead without him.

And he got a preseason vote for ACC Player Of The Year.

Or have we been unlucky with #9s? There you go, that's who I was forgetting.

Who is second best?

Someone did a fantastic series about "Who Wore it Best"

Antonio Banks and Anthony Midget were the honorable mentions. 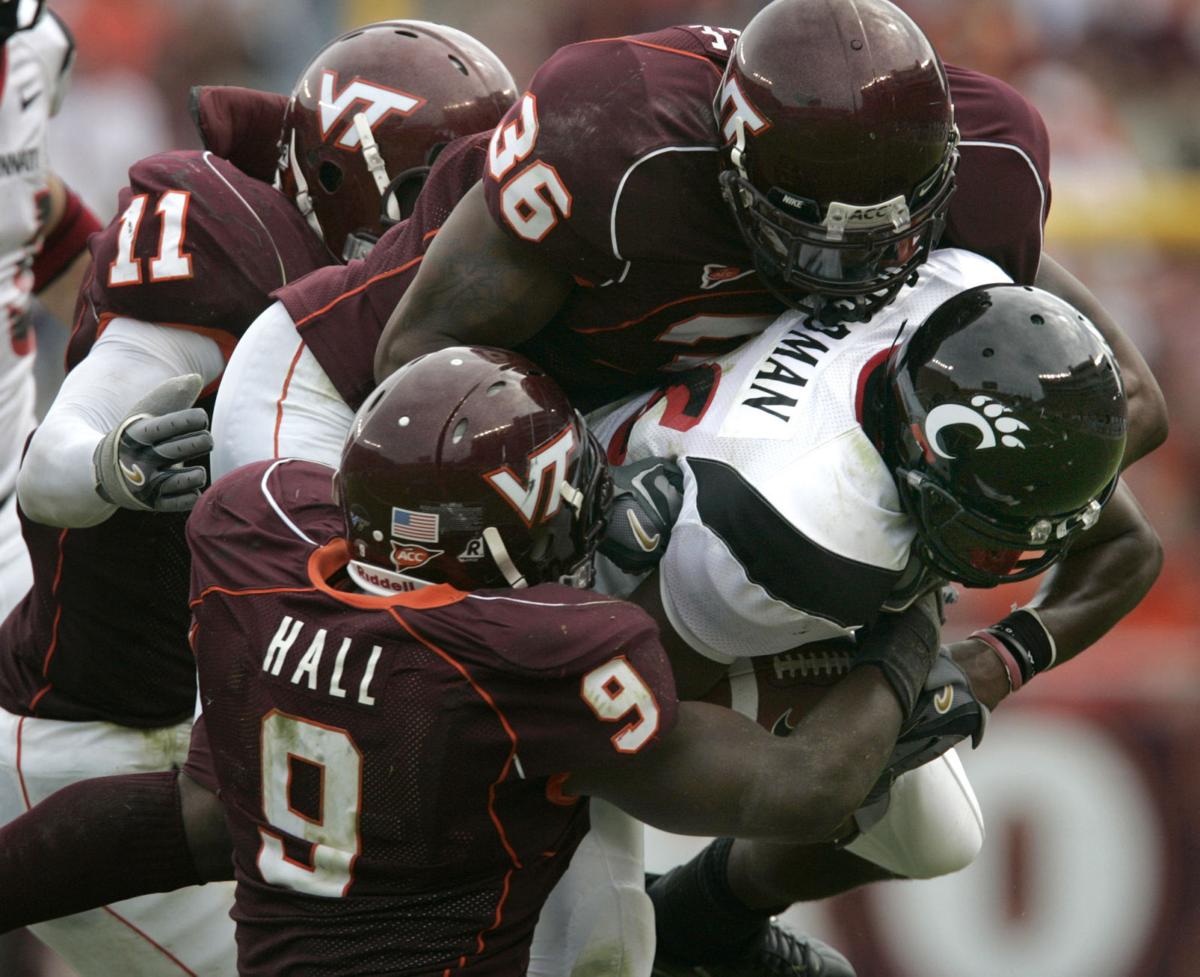 Edit: I waited that extra minute so I could have a drink at work.

Damn I miss those uniforms

But seriously, I liked those uniforms too.