Near 4,000-word, 19-play film breakdown examining the ups and downs of o-line execution, coverage adjustments, tackling issues, and the run and pass attack. 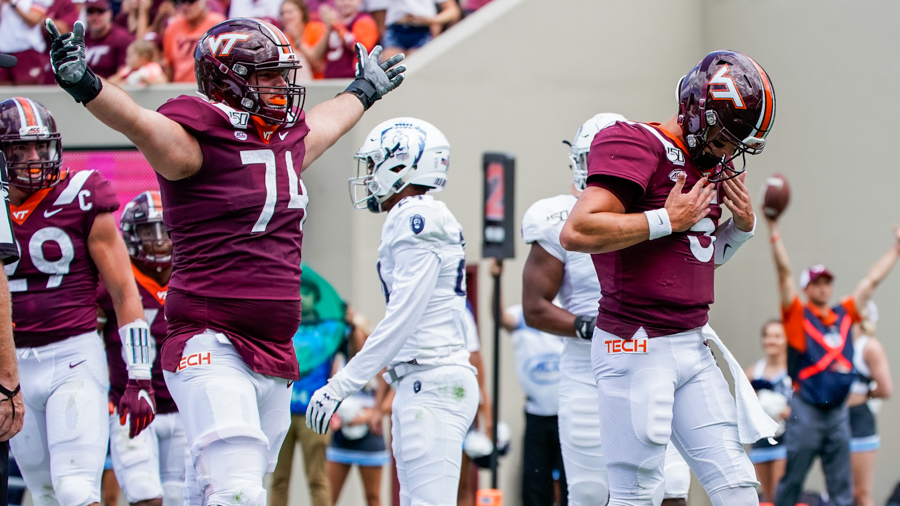 Virginia Tech's uneven performance against Old Dominion was typical of a young team with shaky confidence. At times, the Hokies completely outmatched the Monarchs' limited secondary, and it was only a handful of mistakes in the passing game which prevented the Hokies from scoring on almost every drive through the first three quarters. ODU couldn't really establish anything outside of a well-executed jet sweep series. Bud Foster incorporated a variety of blitz packages to generate pressure and the young Tech corners responded with a solid game after getting torched last season.

Despite those positive baby steps, warning signs which could plague Tech all season also wagged their fingers during several tight moments in the game. Attention to detail issues derailed a handful of first half drives. A couple of offensive linemen were benched after being unable to pick up a variety of run stunts. And, perhaps most disturbingly, the running backs couldn't consistently win against the unaccounted for free defensive hitter, while time and again Tech's free hitter couldn't make a one-on-one tackle against opposing running backs and quarterback Stone Smartt. For the Hokies to have any consistency on the ground, their running backs have to start making unblocked defenders miss or drag them for yards after contact. This becomes even more critical as it becomes clearer that the offensive line group will rely more heavily on inexperienced players than expected. Defensively, Tech's lack of big-play generators on the d-line means those linemen need to focus on funneling the ball to the free hitters. Those free hitters have to do a better job of putting runners on the ground, and the Tech pursuit must improve to help them.

An immediate post-game reaction was disappointment with the run attack's continued lack of success. Attribute some of that to the inexperience of the o-line. I would argue the young group physically controlled the Monarchs in the first quarter. However, some odd run game design failed to account for an unblocked defender in the box, and the running backs could not elude the unaccounted for hats.

For the opening play from scrimmage, Brad Cornelsen called an isolation with pass options to the field-side.

H-Back Dalton Keene delivers a lead block to pair with a nice bubble created by left tackle Christian Darrisaw and left guard Lecitus Smith. However, WLB Jordan Young (No. 3) remains unaccounted for in the blocking scheme. Center John Harris gets the only minus. Free safety Calvin Brewton (No. 4) easily shakes loose following Harris's combo block with right guard Doug Nester against DT Juwan Ross (No. 52). Silas Dzansi is sealing the backside off. I don't see anyone to account for Young, unless Willis should have kept or thrown to the flat due to a numbers read. Otherwise the design leaves me flummoxed.

The running backs failing to make the unblocked defender miss also limited the productivity of the run game. Check out this this toss option to the boundary.

Keshawn King receives stellar lead blocks to the boundary by James Mitchell and Tré Turner. From his left guard spot, Smith hustles down the field and picks off MLB Lawrence Garner (No. 34). Only Brewton stands between King and a huge gain. Brewton wraps King right up and puts him on the ground. For this running game to buoy the passing attack, the running backs have to start either making the Brewton's of the world miss, or drag them for extra yardage.

ODU's runners repeatedly gained extra yards as a result of Tech's alley players missing the tackle or being dragged for extra yards in similar one-on-one situations. More than anything else, Tech's inability to win these one-on-one battles on both sides of the ball kept this game closer than it should have been.