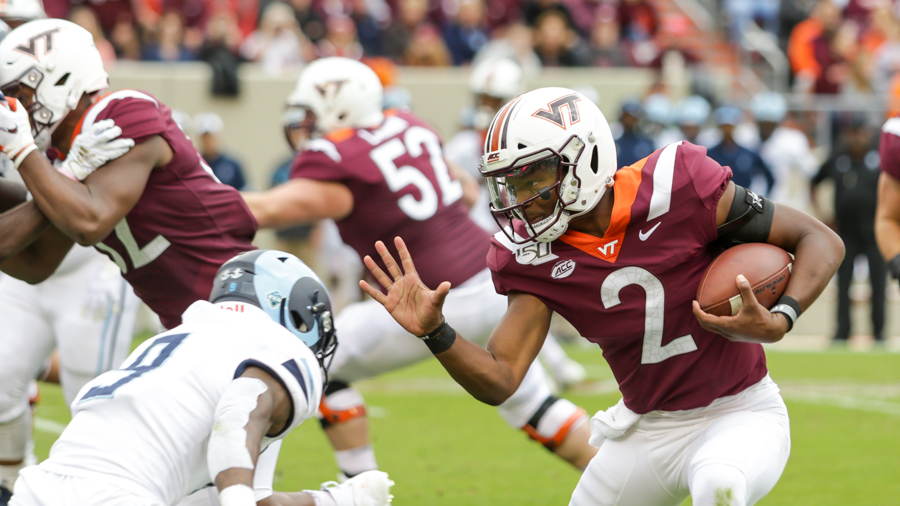 In a season filled with uncomfortable oddities which run in contrast to nostalgia for great Virginia Tech football seasons, last Saturday's contest against Rhode Island caused Hokie Nation's collective peptic ulcer to once again flare up. The sometimes disinterested Tech offense delivered an uneven performance against a completely outmatched, but game, Rams' defense. The Rams rode a talented group of strong route running possession receivers to spread the Hokies' defense out and then exploited coverage matchups in space against Reggie Floyd, Rayshard Ashby, and Jovonn Quillen. Empty seats in Lane Stadium paid stark homage to the lack of dominance on the field, and dissatisfaction with the state of the program. A matchup against a 1-4 FCS program should have provided the inexperienced Hokies' depth players game experience. Instead, it turned into an uncomfortable slog. The final outcome may not have been in doubt, but there was little satisfaction or comfort.

While few of the hearty partisan faithful left kicking their heels together, there were some positives. Maligned offensive coordinator Brad Cornelsen added some interesting adjustments which will should make the Hokies' bread and butter plays more effective. Chamarri Conner and Alan Tisdale's speed on the edges brought a playmaking dynamic which has been missing from the Tech defense since the end of 2017. And, Hendon Hooker flashed tremendous accuracy and poise to compliment his dynamic running ability.

In its three ACC games, defenses overplayed two staples of the Tech offense, the pick-crossing route and jet sweep. Against the Rams, Cornelsen finally made some adjustments which should cause opposing defensive coordinators to take a more conservative approach against those staples.

Cornelsen's reliance on the crossing route with a pick concept was incredibly predictable earlier this season. I noted in this column that if the multiple receivers crossing to set the pick simply kept running their routes, the defenders would probably have a coronary from shock. Cornelsen finally seems to have noticed and he flashed some changes, which included leveraging Dalton Keene's ability more effectively. This 1st-and-10 pass was designed to look like Keene will pick off Tayvion Robinson's defender.

Keene runs a crossing route from the boundary while Robinson crosses from the field-side slot. The tendency this season has been for Keene to "accidentally" pick the defender, LB Branyan Javier-Castillo (No. 16), to free up the intended receiver, Robinson. However, Keene throws a curveball.