There was not a seventh overtime. 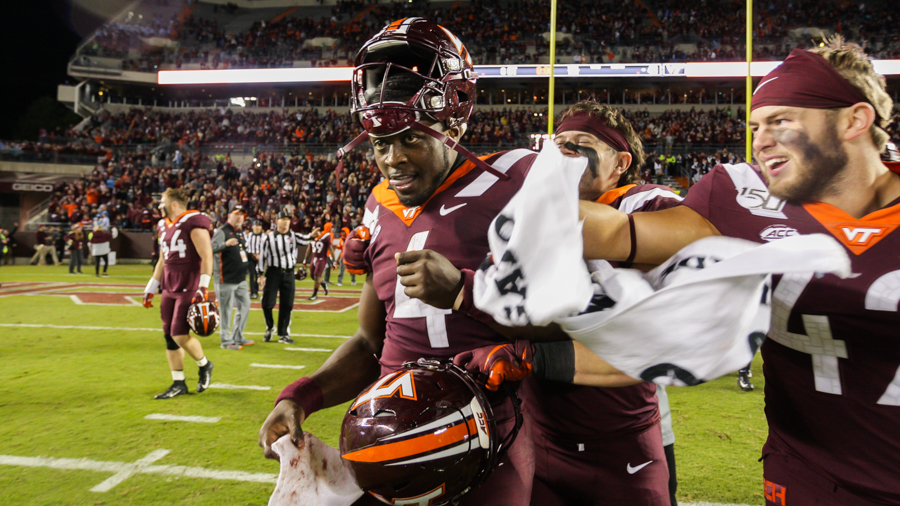 That was a pendulum game for the Hokies. Zoom in and it was a back-and-forth battle for position in the unpredictable ACC Coastal. At a high-level, with two division losses and no margin for error, it dictated which way the Hokies' season would swing down the stretch. The outcome lived up to every bit of the circumstance. Virginia Tech, which closed as 4-point underdogs, pulled off the upset 43-41. Six overtimes were required, and a cardiologist should've been consulted before watching. To that point, the win expectancy at the tail-end doubles as a damn electrocardiogram.

For fun, plot the series of back-and-forth missed field goals in the third and fourth overtime.

The longest game in ACC history occurred in a throwback Lane Stadium environment complete with multiple renditions of Enter Sandman, #ALLMAROONEVERYTHING and the long awaited return of Stick It In.

"It was definitely one for the ages," said Tré Turner. "It's probably the longest game I've ever played in my life, basketball or football. I've never been a part of something like that. I'm just saying the whole time, 'Look at Lane, just look at Lane Stadium'. It feels good to have the fans stay for a full game. There was no better feeling and beating North Carolina means a lot to me. If I lose to them, that really hurts. This game was personal for me, and I'm really glad we pulled out the W."

That atmosphere doesn't happen if the hosts call it an early night, or the guests have other plans later in the evening. It was a Terror Dome classic, sure to be remembered in the same breath as the Nebraska comeback, David Wilson's kick return and Logan's run.

Tech played the second half without arguably its best offensive and defensive players — Hendon Hooker and Caleb Farley, respectively. It was asinine how many times UNC OC Phil Longo and Sam Howell slammed their collective heads against the wall and targeted Farley. By this author's count, eight total, good for only a single completion.

Hooker played a spectacular half of football. Again he demonstrated sound decision-making, precision passing and flaunted the extra dimension running that may make you wonder why he wasn't anointed QB1 far sooner. Take the 55-yard touchdown pass to Turner. The subtle pump on the fake screen equipped Turner with an E-ZPass through open road. Turner slipped by defensive back Myles Dorn (No. 1), who bit on the action, and Hooker hit him in stride.