Film review of the Hokies' win over Wake Forest with an in-depth analysis of a vintage defensive performance and the tweaks and wrinkles that made Inverted Veer / Jet Sweep series roll. 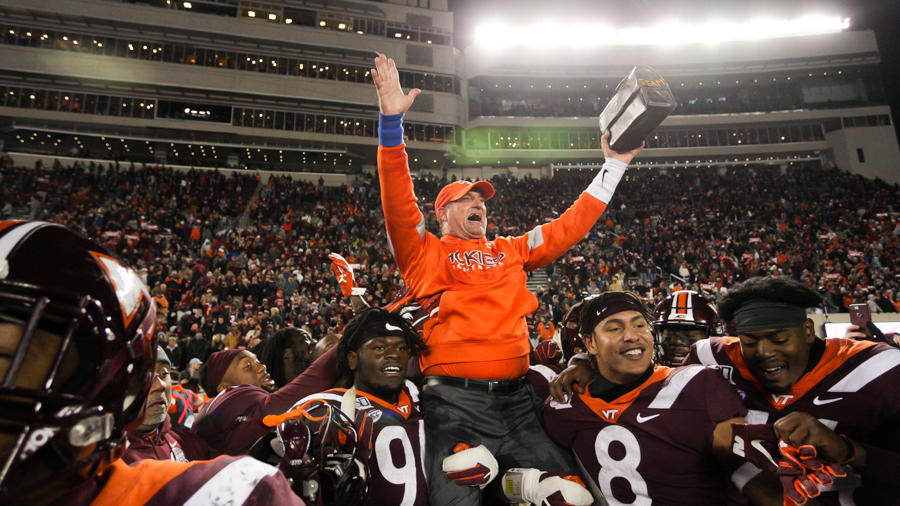 On a day intended to pay tribute to the long and glorious tenure of defensive coordinator Bud Foster, the Virginia Tech defense delivered a performance which reflected the best of Foster's legendary defenses. Wake Forest, and its buzzsaw offense (SP+ 38), was stymied at every turn as if they faced Foster's legendary 2006 group. The Hokies played press man-to-man coverage time and time again against one of the ACC's best receiving groups. Foster brought more pressure packages than any other game this season. At every level, defenders delivered stalwart performances. During a two-year window when Foster was forced to stomach a handful of historically bad performances, Tech perfectly executed the traditional Foster game plan of overwhelming the line of scrimmage and forcing the quarterback into throwing the ball into bad spots.

Unlike many of Foster's most textbook performances, maligned offensive coordinator Brad Cornelsen and the Hokies' offense matched the dominance. Two early turnovers and the singular performance of defensive end Boogie Basham kept Wake Forest close on the scoreboard. However, Tech's offense had Wake chasing ghosts all afternoon. When the Deacons were not out of position, the Hokies' offensive line overwhelmed them. When Wake chased a jet sweep, Hendon Hooker gallivanted up the middle. When Wake played man-to-man, Damon Hazelton curled up in front of the coverage for easy completions. Virginia Tech was more physical. Virginia Tech called better plays. Virginia Tech executed better. And, in the end, the fans were treated to an "ice cold Bud". Foster deservingly received a Gatorade bath after Tech's first win over a ranked opponent at home since 2009.

The Hokies' outstanding run fit constancy traveled back from South Bend. Wake Forest's primary offensive success came from getting coverage breakdowns against its two outstanding wide receivers, Sage Surratt and Kendall Hinton. Tech mostly utilized Cover 1 and pressed up front with Divine Deablo as a deep safety in the middle of the field. Hinton, in particular, was effective against whip Chamarri Conner in those situations.

Still, Tech was so good stopping the run (held Wake to 63 rushing yards) that Wake often faced third-and-long situations. Foster occasionally reverted to the same three-man front with the boundary defensive end dropped into coverage that Notre Dame torched. On this 3rd-and-13, Tech utilized its 30 package. There was mass confusion on the boundary.

Boundary corner Jovonn Quillen aligns against Surratt (No. 14, split wide). D-end Eli Adams and backer Dax Hollifield drop into short zones in the boundary flat. That should disrupt any kind of curl, dig, or out route by Surratt (No. 2). Yet for some reason (seemingly because of confusion between rover Devon Hunter and Quillen about the call), Quillen presses Surratt off the line of scrimmage. This was odd because Quillen has help underneath, but no deep help. Hunter rotates to the deep middle, while Rayshard Ashby and the entire field-side of the secondary rotate to defend the field-side trips. Surratt beats Quillen off the line of scrimmage on a vertical route and forces Quillen into a defensive holding penalty. Meanwhile, Adams and Hollifield cover nobody out in the boundary flat.

Tech generates no pressure with its three-man rush. With time, quarterback Jamie Newman (No. 12) decides to throw to Hinton against Deablo. Deablo covers nicely and forces the incompletion. Quillen's penalty negates the effort and eventually the Deacons score on the drive despite such a terrific opportunity to get off the field.

Foster went back to dropping eight again near the end of the third quarter. Tech was desperately trying to prevent a momentum swing after the Deacons held the Hokies to a field goal following Dashawn Crawford's interception. The Hokies were stout on first and second down, setting up a 3rd-and-7. The defense needed to get off the field and the down and distance was in its favor. Wake aligned with trips to the boundary. Surratt (No. 14) and Hinton (No. 2) were joined by tight end Jack Freudenthal (No. 86).

Again Adams drops from his d-end spot into coverage. However, this time around Deablo flexes over to the trips side in coverage, while functionally Conner plays free safety to the field. This adjustment keeps Conner out of any man to man coverage mismatches.

The Deacons' trips receivers criss-cross. Reggie Floyd locks up on Freudenthal and Hollifield supports with bracket coverage. Jermaine Waller picks up Surratt. Deablo has the deep half and matches up with the dangerous Hinton, who releases vertically. What was Adams doing? If he played a robber zone, he should either be bracketing underneath Waller's coverage on Surratt or tracking Hinton and getting deep enough to be some kind of disruptor in the throwing lane between Newman and Hinton. Instead, Adams was in no man's land against the sideline. He didn't impact the play in any way.

If the boundary d-end isn't going to impact the throw by the quarterback, he should at least be an extra body trying to collapse the pocket. Foster appeared to agree with that conclusion. From that point forward, Tech rushed at least four defenders on every third down.

To bring more pressure, Tech's safeties were occasionally left exposed in man coverage. Notre Dame's tight ends decimated Tech working against Ashby, Hollifield, Deablo, and Floyd. Against Wake Forest, Floyd in particular helped neutralize the Deacons' tight end group. Without Floyd and the rest of the secondary covering well in man-to-man, Foster could not have utilized pressure packages in the fourth quarter. The secondary built that trust throughout the game. On this 3rd-and-6 pass attempt, Tech played man free with a single safety and brought a six-man pressure.