Foster says Goodbye to Lane Stadium and Shares Doughnuts with Everyone

Near 3,000-word film review of the Hokies' 28-0 blanking of Pitt focused on how the Hokies' d-line disrupted underneath throws and offensive repetition and misdirection facilitated critical gains. 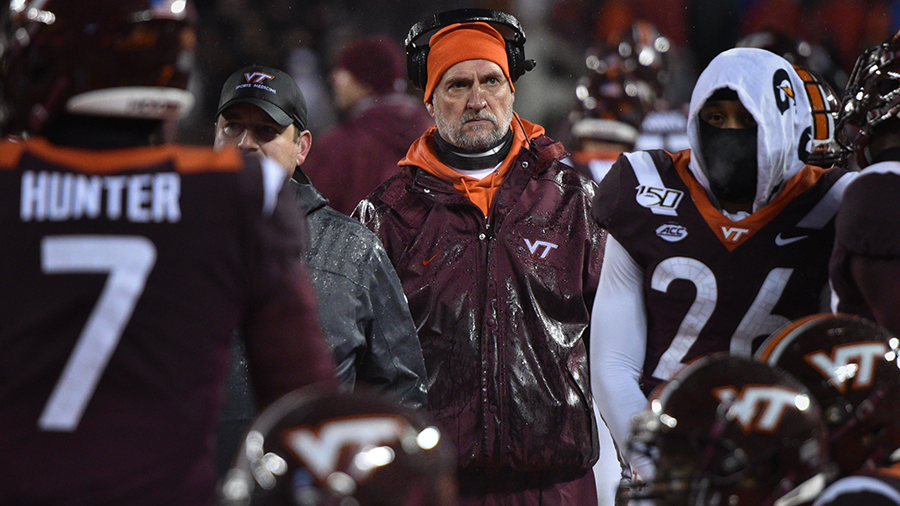 I am running out of adjectives to describe Bud Foster and the 2019 version of his beloved Lunch Pail Defense. As the late Tony Stark once remarked, "Never has a greater Phoenix metaphor been personified in human history." After spending much of 2018 out-toughed and out of position, Foster's young defense struggled to open the 2019 campaign. After the defense hung on by its fingernails against Old Dominion and Furman to prevent catastrophe, the house of cards collapsed against Duke. The change to Hendon Hooker at quarterback sparked a sudden surge of touchdowns. However, Foster's charges found themselves on their heels while giving huge amounts of yardage in wins over Miami and North Carolina as well as a back-breaking loss to Notre Dame.

Beginning with the dominant performance against Wake Forest, the old Foster, and the overwhelming pursuit and execution found in his classic defensive huddles, returned. Maroon and orange bodies have flown to the football. Quarterbacks have wilted under wave after wave of pressure. Defensive backs have locked up receivers and suddenly the defense has scored points. Foster showed faith in his kids that they could execute his pressure schemes, and his players have rewarded him with the first consecutive shutout streak in ACC play in school history. The season has become a fitting tribute to Foster's ability to adjust his scheme while sticking to the basic principles which have driven this defense to be elite since 1995.

Mixing it Up: Zone Blitz and the Defensive Tackle Drop

Foster has been the best defensive coordinator in college football since the mid-90s in large part because he takes away the opposition's bread and butter. Pitt found offensive success primarily from short throws on curls or crossing routes in the middle of the field. Sinking defenders into the middle of the field as part of his pressure packages served as a mechanism to both disrupt quarterback Kenny Pickett and force the Panthers to find some other way to move the football.

Joe brokedown the zone blitz that resulted in DaShawn Crawford's back breaking interception against Wake from a couple weeks ago, and I noted that similar blitz concepts could wreak havoc specifically against Pitt.

[T]his blitz design will have an impact on the Pitt passing game. Pitt loves to work short crossing routes and interior curls on third down in the passing game. Seeing this design (in film study) could cause Pickett a second of hesitation, and that can make a huge difference. Plus, this is a scheme that Foster can call upon if he identifies that Pickett isn't reading the defense well or is pre-determining his throws.

Foster deployed numerous five- and six-man pressures right out of the gate to condition Pickett into attempting rushed throws. Then at opportune moments, Tech feigned a heavy pressure and utilized it defensive line as robbers underneath. The assigned robber faked a rush, then sunk into the middle of the field and read the quarterback's eyes to disrupt the passing lane.

Rayshard Ashby (No. 23) and Dax Hollifield (No. 4) blitz through the A gaps. Crawford (No. 36) and fellow defensive tackle Jarrod Hewitt (No. 5) widen to the B gaps, while Garbutt (No. 45) and Belmar (No. 8) push up the edges. After getting depth on the edge, Belmar and Garbutt drop back to the middle to spy on Pickett and robber on any short throws. Belmar in particular does a good job getting enough depth to at least swing an arm at the throw.

Behind Belmar, the Hokies play Cover 1. Rover Reggie Floyd (No. 1) plays deeper than the deepest receiver on the boundary hash. This leaves a ton of space for wide receiver Taysir Mack (No. 11) to work back underneath the man coverage of corner Jermaine Waller.

Waller does an outstanding job. He plays inside leverage, with his hips on the inside to take away cuts into the middle of the field. Mack runs a really sharp dig route to cross Waller's face. Waller was turned almost facing the boundary sideline when Mack starts his dig cut. Waller completely flips his hips and breaks on the football to break up the play. This was NFL quality corner play.

It's critical to note down and distance of when Foster used these defensive line robbers on zone blitzes. Foster dialed them up on critical momentum and change of possession downs. Near the end of the first quarter with the Hokies' offense sputtering, Pitt was near midfield and faced a 3rd-and-12. Foster called up a five-man pressure that featured a corner blitz by Caleb Farley (No. 3) from the boundary.