Extending the Streak: Keys to a Virginia Tech Victory against Virginia

The Commonwealth Cup and Coastal Division are on the line. Read this 2,400-word film preview of Hokies-Cavaliers and understand the matchup better. 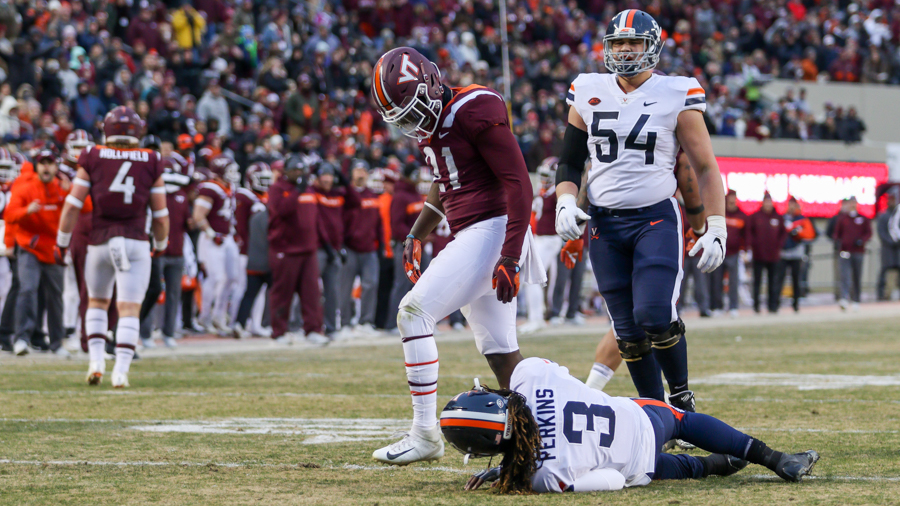 Virginia blew a huge opportunity to snap fifteen years of futility against Virginia Tech last season. The Cavaliers, behind dual threat quarterback Bryce Perkins, caught the Hokies reeling following devastating defensive collapses against Georgia Tech and Pitt. Somehow, the Hokies pieced together their best defensive half of football all year combined with a couple of huge plays by Tré Turner to take a 14-0 halftime lead. Virginia clawed back to take a lead and had the Hokies on the ropes when Dalton Keene bailed out Ryan Willis on a prayer deep ball. Steven Peoples rumbled into the end zone to tie the game immediately after Keene's miraculous catch, and the combination of a Brian Johnson field goal and a fumble forced by Rayshard Ashby preserved the Hokies' dominance of the Commonwealth Cup for another season.

Most of the key contributors from the 2018 instant classic return back to the stage for the 2019 edition. The difference is, instead of two programs in a fist fight over who is a little better in the middle of the ACC Coastal pack, Black Friday's matchup will crown the Coastal Champion.

It isn't shocking that bottling up Bryce Perkins will be a key to the game. Perkins is a unique run-pass threat who is by far Virginia's leading rusher (523 yards). Virginia relies heavily on split zone read run concepts the forces the defense to account for a slow developing dive and Perkins in space on the edge. Second leading rusher Wayne Taulapapa (No. 21, SO, 5-9, 210, 399 yards) is a sledgehammer inside. Taulapapa isn't elusive, but he is incredibly difficult to bring down and has a nose for the goal line (11 rushing TDs). To combat the split zone in 2018, Bud Foster relied heavily on loading the box and the Hokies' defensive ends crashed inside to take the dive man. Virginia's offensive line couldn't handle the movement and athleticism Tech showcased up front which left extra defenders to account for Perkins on the edge. Expect a similar game plan this season.

For UVA, the key to the game is being efficient against one-on-one coverage to the outside. The Cavaliers have a multitude of weapons who will benefit from one-on-one coverage thanks to Perkins' run threat. The Hokies' safeties and whip linebackers spent much of the Wake Forest, Georgia Tech, and Pitt games matched up in one-on-one coverage against slot receivers and tight ends. However, Virginia has quality third and fourth receiving options of a caliber that the Hokies have not faced since their trip to Notre Dame.

In order to open up the box for Perkins and the run game, Virginia offensive coordinator Robert Anae has to establish RPO throws on early downs. Virginia utilizes both a traditional tight end, Tanner Cowley (No. 44, SR, 6-4, 240), and scat backs, such as Billy Kemp IV (No. 80, SO, 5-9, 175), in an H-Back alignment. Expect Virginia Tech to play a ton of press coverage and Cover 1 with the box loaded, similar to how Pitt approached defending UVA in their season opener. Virginia used Cowley on RPOs to loosen the defense. Cowley motioned out of the backfield on this 2nd-and-5 RPO and got loose on a circle route for a nice game.

Virginia's most explosive playmaker outside is slot receiver Joe Reed (No. 2, SR, 6-1, 215). Reed is well acquainted with Hokies fans, as his two deep touchdown catches thrusted the Cavaliers right back into the game last season. Reed leads the Cavaliers with 65 catches this season. Virginia will scheme up designs to get Reed matched up with Chamarri Conner, Reggie Floyd, and Divine Deablo. Perkins most comfortable throw is a quick out to Reed from the slot. If Reed has a deep safety aligned over him, I almost think Perkins has an automatic check to the quick out, especially if there is some kind of motion which tips that the defense is in man-to-man coverage. It is a design littered throughout Virginia's film for this season.