Only Scratching the Surface, High-Ceiling DE Justin Beadles Signs with the Hokies

For the 6'5" edge rusher out of The Peach State, the sky's the limit. 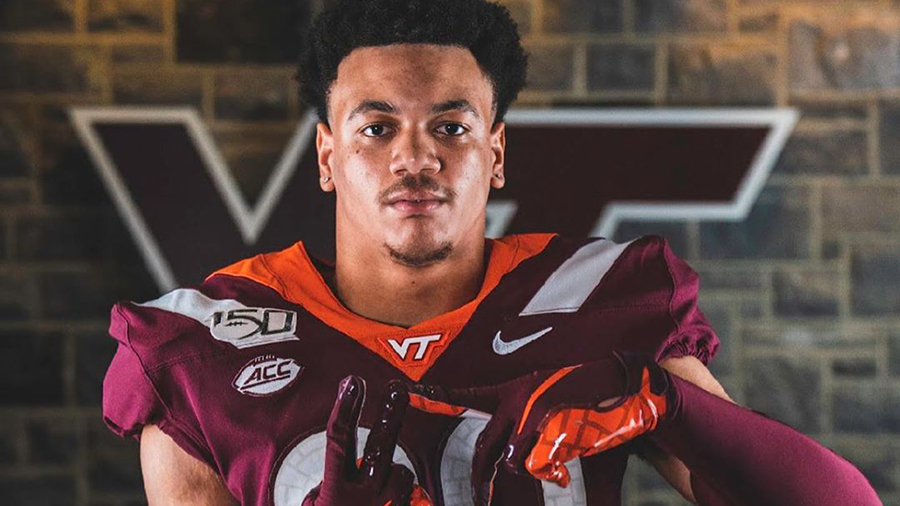 Justin Beadles flashes a VT during an official visit to Virginia Tech.

In the blink of an eye, Justin Beadles fell in love with the Hokies. He visited Virginia Tech for the first time ever on December 14 and signed with Tech four days later. The towering 6'5", 232-pound defensive end from Sandy Creek HS in Tyrone, GA chose Tech over Arizona State, Mississippi State, Missouri, Boston College and Maryland among other offers.

The 247Sports Composite ranks the WDE prospect a 3-star (0.8519, and 247Sports considers considers Beadles the 72nd ranked player in the Peach State. Beadles was largely off the recruiting board for the Hokies, and most everyone else, until this fall. He committed to Arizona State on July 25, but de-committed on October 14.

Towards the end of November is when the Hokies took notice of Beadles and offered him a scholarship.

"When VT called him, he ran to my classroom and pulled me out and was like, 'Hey coach, we need to talk, we need to talk!'," said Sandy Creek defensive line coach Connillious Godfrey. "And we spent about 25 minutes talking about Virginia Tech, the pros, the cons, and things of that nature. And just the opportunity to sign with a Power 5 school like that."

For Beadles, it was the allure of playing for a young, energetic defensive coaching staff led by Justin Hamilton that sold him on the Hokies.

"The brotherhood of the team and the way the coaches got along with the team [was my deciding factor]," said Beadles. "I asked the players individual away from the coaches to see what kind of answer I would get, and all of the players said the players love the coaches. I also like the defensive coordinator."