Film analysis of Justin Hamilton's scheme debut which showcased emphasis on pursuit and pass rush focused on collapsing the pocket. And how Alan Tisdale fits in the new system. 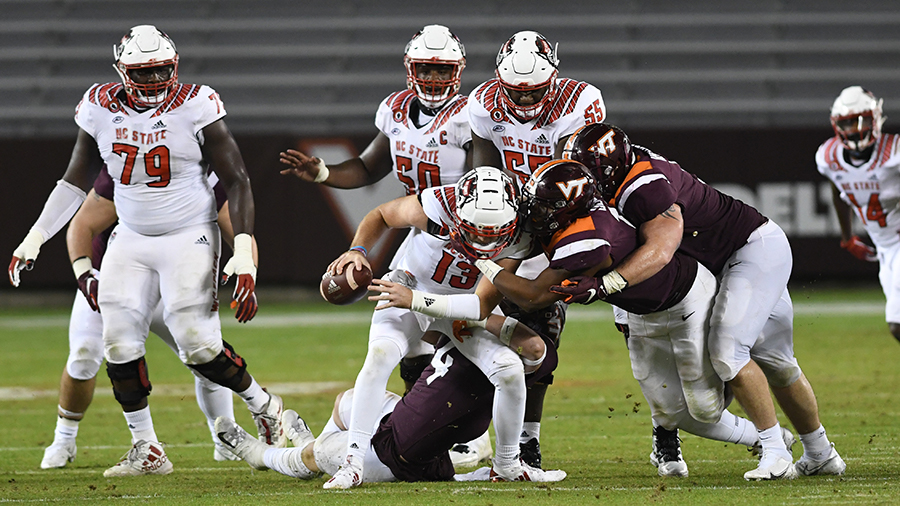 This entire season will be a learning experience for both the Virginia Tech defense, keen observers, and followers of this column. After years of familiarity with Bud Foster's defense, defensive film reviews will be like going back to high school to relearn calculus.

I don't think it is fair to make conclusions, but I did observe some tendencies which were pretty consistent against NC State.

The Hokies used a nose tackle (usually an eagle technique over the guard or cocked angled at the center) and a three-technique up front. Instead of fitting into gaps, the linebackers played a little deeper and flowed laterally. Nickel Chamarri Conner spent less time in the box and blitzing, while the front-six rarely looked to force and spill the football; what we have seen the Hokies do for two decades. It is indeed a new era.

The most interesting change involved how Justin Hamilton and Ryan Smith deployed the Tech's safeties. Veteran Divine Deablo consistently (not always) lined up away from the passing strength of the formation. True freshman Keonta Jenkins aligned to the passing strength, usually over the second most dangerous receiving threat. For example, if NC State aligned with trips receivers to the field-side, Deablo usually aligned on the boundary hash, while Jenkins would line up to the field inside slot or outside slot. If those trips aligned to the boundary, Jenkins would flip to the boundary and line up on a slot.

Here is a basic look at the Hokies' pre-snap alignment. NC State had trips to the field-side. Jenkins (No. 33) aligned at 12 yards deep over the inside slot. Conner (No. 22) aligned on the wide slot. Deablo (No. 17) was on the boundary hash.

The coverage appears to be a leverage zone. Deablo works from the boundary hash to the field to provide inside leverage on slot Porter Rooks (No. 14). Jenkins plays outside leverage against Rooks, who runs a vertical route. Back to the boundary, corner Armani Chatman (No. 27) seemingly plays a soft outside leverage deep third. Chatman invites receiver C.J. Riley (No. 19) to run a slant or a post. The linebacker positioning is a key concept.