The Formula for a Virginia Tech Victory at Duke

The Hokies must slow Duke's rush and limit the efficiency of its pass attack. 11-play film preview and breakdown of the test the Hokies face at Wallace Wade. 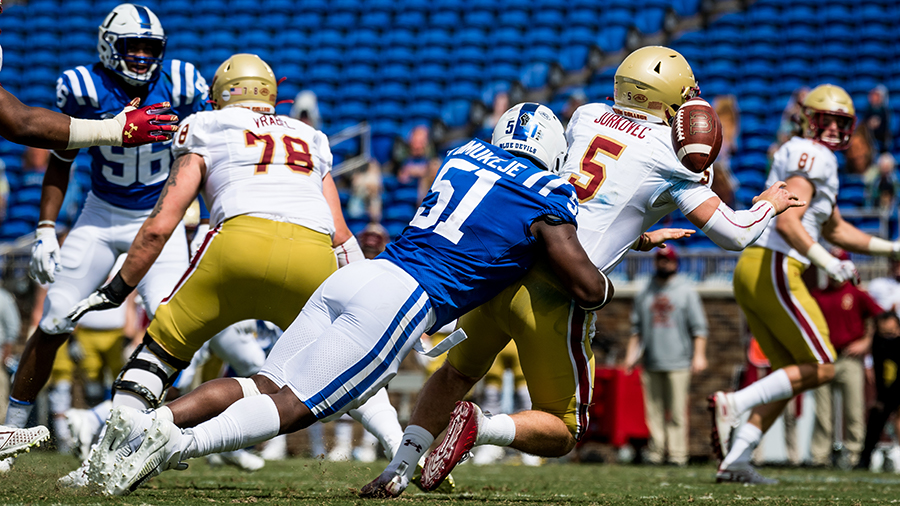 The wins can't be too high, and the losses can't be too low. Virginia Tech faces a trap game of the highest magnitude when it travels to Durham to play a battered Duke squad. Feeling good after a physically dominant performance against Tobacco Road's NC State, the Hokies can't look at the 0-3 next to the Blue Devils' record and expect an easy day at the office. They gave Notre Dame and Boston College fits with their defensive front. Only a brutal fourth quarter and awful red zone play has kept Duke from having a winning record.

Despite their struggles, Duke presents unique problems for the Hokies. The Blue Devils delivered a brutal 45-10 drubbing to the Hokies on national prime time television last season. While some of the personnel, particularly at quarterback, has changed, Duke is well schooled in many of the defensive and offensive concepts which made the Hokies look bad last season. Duke also has confidence knowing that the facets of their game which are proving to be successful this season are the same elements which gave Virginia Tech's fits in Blacksburg.

The Blue Devils' defensive character has changed significantly over the years. Duke once favored a consersative zone scheme. It protected against the deep play and schemed to spill the ball to an extra safety who creeped into the box late. Now, Duke has an outstanding pass rush and plays more press coverage than any team in the ACC besides Pitt.

For the Hokies to have success, Brad Cornelsen has to keep out of obvious passing situations as much as possible. Duke has a dizzying assortment of exotic blitz packages for passing downs. In most of the looks, the Blue Devils will put seven defenders right on the line of scrimmage, with three down linemen. From that alignment, Duke can do everything from sending all seven to only rushing three, and they do a terrific job of disguising their intent.

On this third down, Duke placed seven defenders on the line of scrimmage. The alignment was so tight that there does not appear to be a defender to account for the field-side slot receiver. All seven were in a position to rush.

With all that bite before the snap, Duke ultimately only brings a three man rush. Clogging the box allows for former Bud Foster recruit, defensive end Victor Dimukeje (No. 51, SR, 6-3, 265) to line up out wide in a nine technique. At the snap, Dimukeje explodes past All-ACC preseason selection Zion Johnson (No. 77) to crumple quarterback Phil Jurkovec.

Dimukeje has logged 4.0 sacks over Duke's initial three games and emerged as the star of Duke's defense. Bookending the line with Dimukeje is pre-season All American pick, Chris Rumph II (No. 96, R-JR, 6-4, 235). While Rumph has not pulled down the quarterback as often as Dimukeje (1.0 sacks), his versatility allows him to line up at various spots across the front and make tackles (third overall for Duke, 17 total).

Watch how Rumph moves around to confuse the offense.