4,000-word and 14-play analysis of: Herbert and the o-line's big day, a blocking wrinkle that made it happen, Mitchell's possibly untenable workload, the d-line scheme that's generated immense pressure with minimal bodies and an assessment of the linebacker corps. 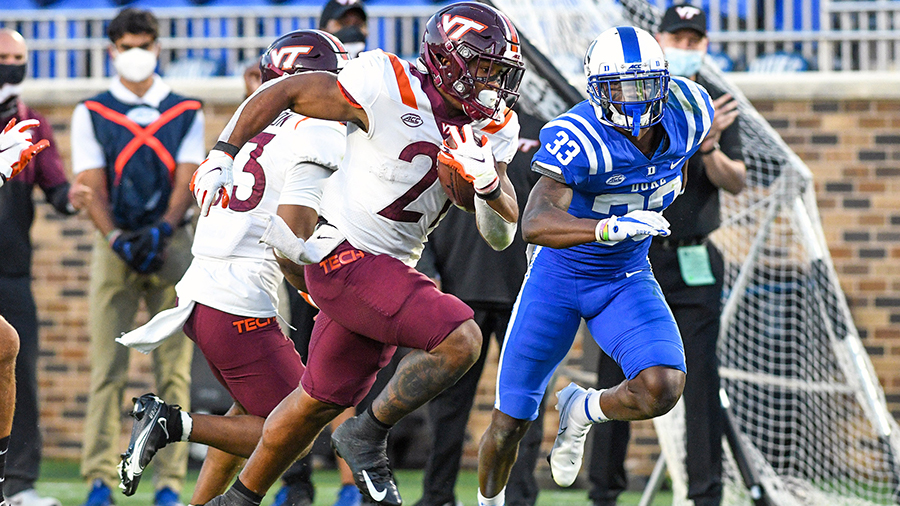 A week of rapidly changing storylines clouded the outcome of Virginia Tech's game against Duke. Initially riding high on a dominant win over NC State, and with vengeance in their mind, the Hokies were double-digit favorites over the struggling 0-3 Blue Devils. I was nervous though. Despite their record, Duke's best attributes (a great pass rush and an efficient, spread short pass attack) targeted Tech's question mark areas. With the revelation that the entire defensive secondary other than Keonta Jenkins plus defensive coordinator Justin Hamilton, and secondary coach Ryan Smith held out due to potential COVID-19 exposure, the recipe was there for the Hokies to meet disaster in Durham. David Cutcliffe, one of the most respected offensive minds in college football since the early 90s, was bound to ruin former Hokies' linebacker Jack Tyler's debut as (co-)defensive signal caller.

The understaffed Virginia Tech defense held serve in the first half, while Khalil "Juice" Herbert slipped through enormous holes en route to one of the most memorable single game individual offensive performances in recent Tech history (358 all-purpose yards, tops since '86) and a 38-31 victory.

Herbert didn't simply flash the power he showed at Kansas. Herbert didn't jump into huge cutback lanes as he did against NC State. He demonstrated patience, elusiveness, and breakaway speed that completely outclassed Duke's secondary. And, as with Herbert's huge performance on opening night, a physically dominant offensive line took over the football game as the Blue Devils wore down.

Given Braxton Burmeister's shaky performance in the passing game, Duke expectedly played press coverage outside and gambled inside to mess up Tech's blocking scheme. At times, those chances paid off, especially early on. Instead of getting into the gap and aggressively attacking the first odd color that crossed their face, the Hokies' young o-line was initially too reactive. Duke's linebackers made them pay.

On this zone read, Tech actually had a good opportunity for a chunk run. Duke only had six defenders in the box, with a single high safety.

Towering Luke Tenuta (No. 69), who was outstanding the entire game, neutralizes Rumph (No. 96) on the edge. I am not sure Herbert reads this correctly, and later in the game he broke numerous big runs bouncing to the outside. Tenuta has the edge, and there wasn't any support from a corner or safety outside the hash. Still, both Doug Nester (No. 74) and Lecitus Smith (No. 54) regressed to "catch mode". They ran to linebackers Rocky Shelton II (No. 43) and Shaka Heyward (No. 42) and caught them instead of plowing through them. Shelton jams Nester into the hole, and Heyward keeps his feet moving off Smith to plug up the bubble and tackle Herbert.

As the game wore on though, the o-line became more physically assertive. By the fourth quarter, the Hokies stymied their d-line counterparts and consistently got blockers to the second-level. This split zone was indicative of that nastiness.