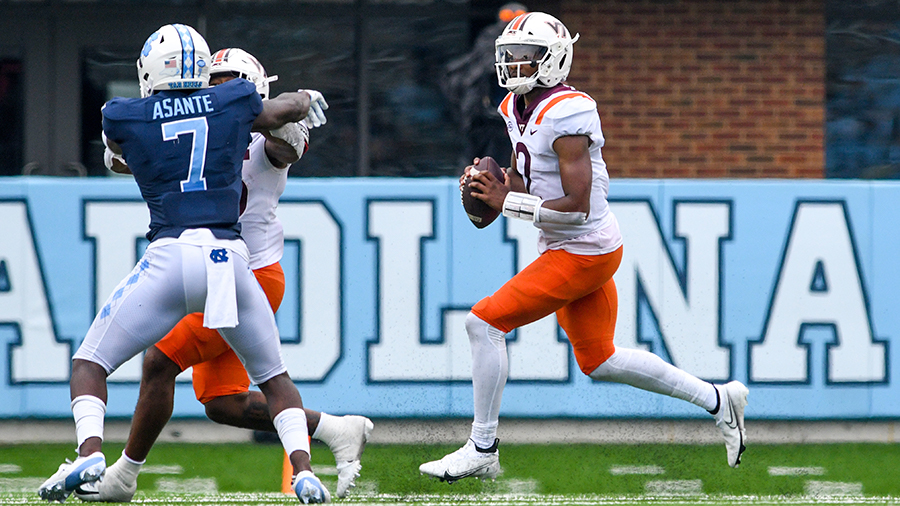 Hindsight is 20/20. While I've been consistent all along that Hendon Hooker has the highest upside and is the best all-around quarterback in Virginia Tech's locker room, I also understood why Braxton Burmeister got the starting nod. Burmeister's passing deficiencies have been mitigated by the Hokies' success with the zone read game, where Burmeister's sleight of hand and speed have impacted opposing defenses this season. Plus, Burmeister was 2-0. It isn't a great look to bench a guy who is winning.

What I couldn't grasp watching live was why Brad Cornelsen abandoned the zone read schemes which had so much success the two previous games. Instead of giving Tech's defense a moment to breathe and get Khalil Herbert going, Burmeister got the bulk of the carries in the first quarter. I discovered a schematic reason for Cornelsen's thinking as I went back and looked at the film. Still, even though the way North Carolina defended made some of those quarterback runs look promising, Cornelsen has to figure out how to get the ball in the hands of his best offensive players.

To compound the issue, North Carolina showed no respect for Bumeister's ability to throw the football. The Tar Heels played press coverage with a single deep safety throughout most of the first half. They dared Burmeister to beat them deep, and the extra defender near the line of scrimmage caused all kinds of problems for Tech's blocking schemes. Burmeister couldn't do it, and Hendon Hooker was put in the unenviable position of winning back his starting job while trailing big in the second half.

Confusion and Quarterbacks — The Hokies' First Half Offense

To their credit, North Carolina adjusted to exploit Burmeister's limitations. Instead of running a base 3-4 (made even more difficult by the absence of starting defensive tackle Raymond Vohasek) the Tar Heels used a variation of the two down linemen look they utilized heavily against Syracuse. However, instead of using five defensive backs, linebacker Eugene Asante (No. 7), a backup to stellar inside linebacker Chazz Surratt (No. 21), played a hybrid nickel-linebacker in the space to the field-side. The five linebacker personnel was a confusing look that provided the Hokies trouble early.

On Tech's opening run of the game, tight end Nick Gallo (No. 86) approached Asante (No. 7) as if he would come up and seal the edge. When Asante cut inside, Gallo couldn't cut him off. Only a big time run by Herbert salvaged some yards.

With Asante garnering attention, Cornelsen adjusted with the quarterback power away from the extra linebacker. It was a good thought. The Hokies had a numerical advantage with Herbert leading a pulling Doug Nester into the hole. However, the blocking scheme looked completely confused.