GIFTORY: Frame-by-Frame Highlight Reel of Virginia Tech's 40-14 Mashing of BC

The Hokies racked up 350 rushing yards. 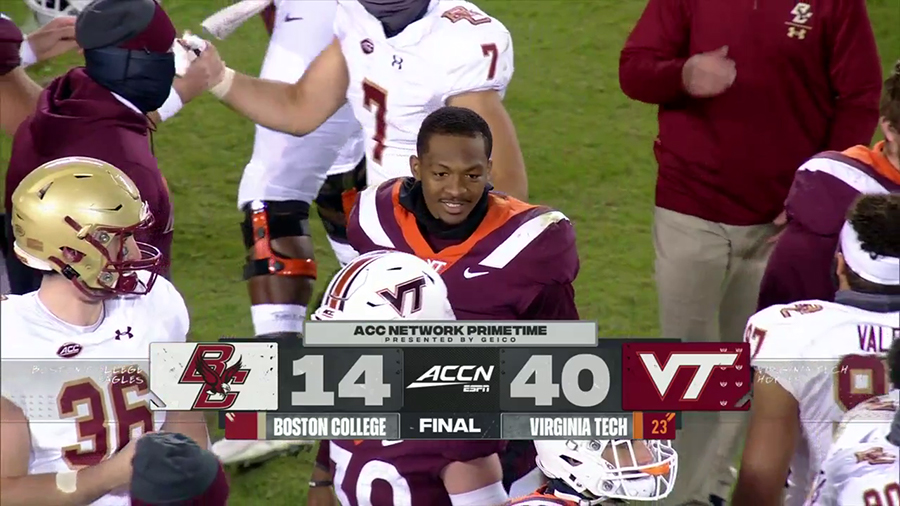 Thank you Joe! Got to love a good breakfast topping!

Watching Blackshear this game, It almost feels like when we had RMFW and Evans at the same time. Both studs, but not enough limelight to go around.

There were 2 really impressive 3rd down conversions, the one with Smith caught the pass and fought for it and another where Blackshear should have been down for a loss managed to get something out of nothing.

Its nice to finally have RBs again (and king played!)

Giftory: Taking the Monday out of Monday mornings, all season long.

Waffles are the superior breakfast food but pancakes are great in the afternoon and evening...

I'm waffling on this.

I'll pancake anyone who disagrees.

Are you talking Brussels waffles or Liege waffles? Because Liege waffles are outstanding. The pearl sugar in the batter gets caramelized while cooking.

Leg for your level of culture... gotta respect the knowledge.

Big oversized waffles in general though.

Back in the dark ages, when I was at Tech, Belgian (belching) waffles were one of the better things found in the dining hall. I think it was a Sunday night option, usually. Tech's dining options have dramatically improved.

There are certain places that still sell them, but more frequently and with specialized VT plates.

I think I was at Tech when I realized how skinny American waffles were my preference.

I like Belgian waffles better because they usually have deeper pockets and therefore can hold more ice cream.

Or any addition. Butter, Cream Cheese, anything.

All bets are off when dessert is the subject.

There was no talk about desert, only talk about ice cream. Dairy is and essential part of a balanced diet! /s

I love the smell of giftory in the morning! Thanks to the whole team for doin' work out there, thanks to Joe for taking the sting out of everyone's Monday morning!

Murray needs to get better at those INT returns. The dude should have 2 TD's now. He had 4 or 5 blockers with him this time and cut away from them.

I hope he gets one before the end of the year! He deserves it at this point!

And he was tackled by the QB.

I'm more concerned that he's holding the ball like it's a full diaper. Tuck that thing in my dude.

Watching him carry the rock like that made me have flashbacks to my old OC in high school taping our one WR's arm (with ball) high and tight to his chest for an entire practice.

Yup. There was a kid in my Pop Warner team that did that every time. My dad and I will inevitably say to each other, "Hey, it's Larry!" whenever we see a player do it.

Giftory in the morning making me feel all

We a running back school now.

Darrisaw's 3 blocks on that play were fantastic. In my head, that linebacker(?) was saying, "every time I turn around that big dude is shoving me".

When I saw that I immediately thought of the play from The Blind Side where Oher was taking him to the bus. Dude was probably wishing he could go home. At least we did not get an excessive blocking penalty.

Darrishaw is yelling " show me the money" as he blocks that lb to the end zone. NFL is calling his name

Please please please make a gif of BC's second fumble, bonus if you can add panicked screams on each of the miscues (fb running into his own qb, then panicked pitch to RB, who gets LIT UP, then the scrum for the ball). We were rolling watching that on DVR replay but the game got deleted for four more hours of GD paw patrol.

8:09 in the first is the run where the BC defense engulfs Hooker and then Hooker turns what should have been a 5 yard loss into a 5 yard gain. Fantastic play by Hooker.

My mood during this entire game.

Dang, had Conner, Tisdale or Ashby looked to the right and got a block on 13, that mighta gone for 6

Mostly Conner was in the right spot to get him, the other 2 seemed to be a step behind

Yeah don't think any of them saw 13. Taylor could use a few pointers from Tre on holding a block.

In their defense, you don't tend to recruit defenders who are known for blocking.

Thank you! Always enjoy these

Did anyone find out what happened to Turner? I thought I saw him get hit in the face on the sideline by one of our own, maybe after our first TD? Don't think I saw him in the game afterward in the 2nd qtr.

I saw the same thing! Looked like he was holding his nose right after the defense came off the field celebrating. I told my wife, "I think Tre just got head-butted by someone with their helmet on... "

The accidental headbutter was Brion Murray celebrating after his INT. I saved the clip on my PC but I'm not good with giftory, so here's a screenshot immediately after impact.

Also, the incident happened with 5 minutes left in the game. Tre had been out for a while before that, so the headbutt just added to whatever Tre was feeling. It's also possible that there was another sideline accident earlier that I missed. 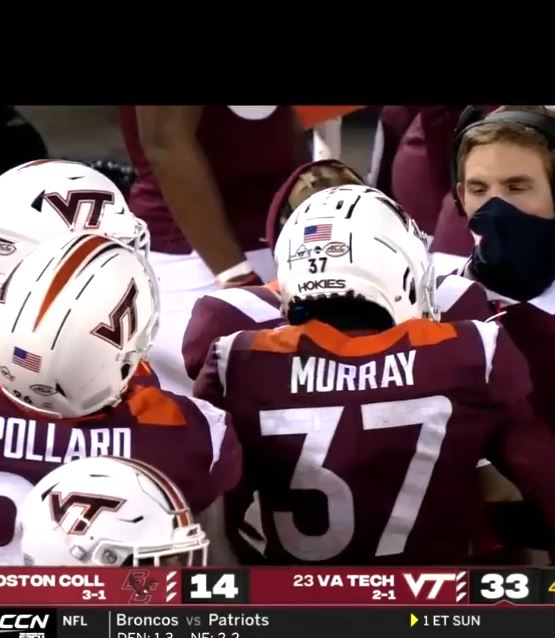 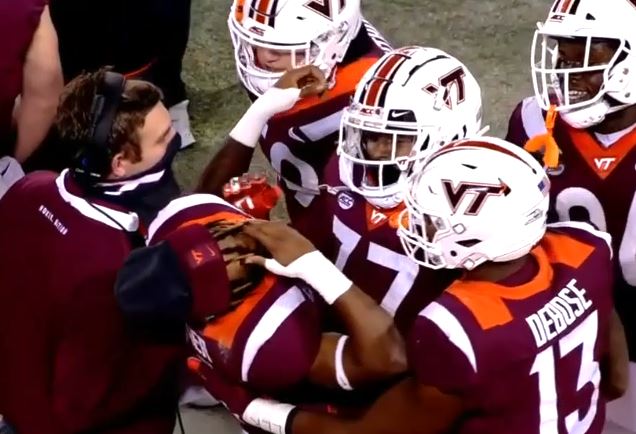 That second picture is exactly what I saw right before the camera cut away. I thought it was pretty late in the game as well but had finished most of a Hardywood Rum Barrel Pumpkin by then...

The second picture is what I remember seeing, just thought it was earlier in the game, I guess. Was watching the replay on espn U this afternoon, but didn't see it. It reminds me of that kid for Army that headbutted one of their coaches earlier this year.

We love to see the spin cycle