Adjusting on the Fly: Breaking Down How the Hokies Put Away the Eagles 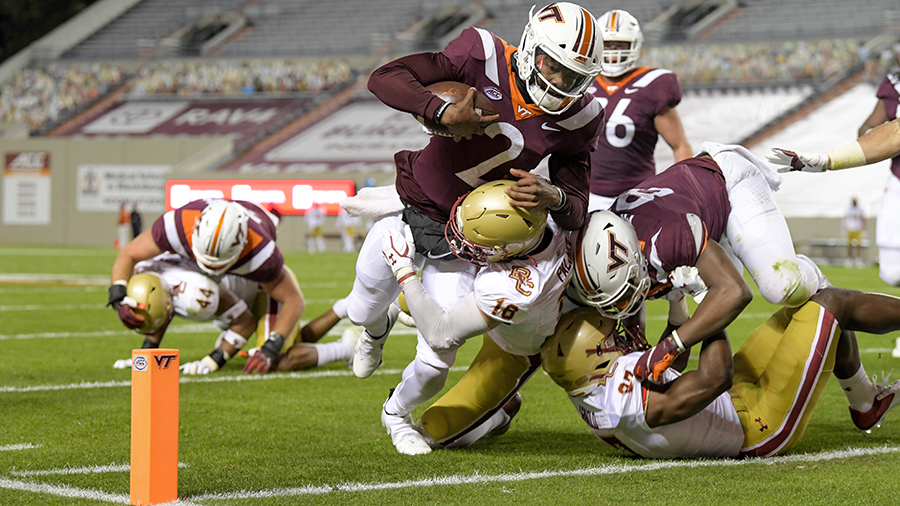 Facing the most physical front-seven on the schedule thus far, Virginia Tech's offensive line continued to dominate the line of scrimmage as the Hokies rolled to a physical 40-14 win against a solid Boston College squad. The Eagles tried a number of solutions to contain Hendon Hooker and Khalil Herbert's dynamic zone read combinations. While Boston College had moments of success, offensive coordinator Brad Cornelsen's adjustments kept the Eagles off balance. Meanwhile, Hooker and Herbert whipped through huge holes and repeatedly made BC's secondary look inept.

Winning in the Trenches

Not only did Tech's offensive line deliver an excellent performance; they also demonstrated adjustments and flexibility in technique that allowed the Hokies to match up more effectively against a wider range of defensive concepts. Last season, Boston College's edge players spent most of the game taking very flat pursuit angles to run down plays from the backside. On Saturday, the edge defenders ran much further up the field at times. The hard, horizontal scoop blocks I have lauded for the last couple of weeks would not be as effective. Watch this example from Tech's opening drive.

The Hokies align with five receivers and an empty backfield. Tré Turner motions from the field slot for a jet sweep fake, and Hooker keeps on an inverted veer. Both defensive ends — Brandon Barlow (No. 44) and Marcus Valdez (No. 97) — scream into the backfield like they were shot out of a cannon. Left tackle Christian Darrisaw (No. 77) makes the play. First, he steps hard inside to secure the bigger threat — any kind of a rush through B-gap to his inside. Then, he hinges back to chip Valdez with a throw technique. This was an incredibly athletic play for an offensive tackle. The chip was just enough to push Valdez just behind Hooker's mesh point with Turner, preventing Hooker from being crushed on his blind side. Hooker options Barlow, who has to stay wide enough to cut off Turner.

Up front, right guard Doug Nester (No. 74) and right tackle Silas Dzansi (No. 60) cut off the gap to their inside first, then seal off the defenders. Nester pins nose tackle TJ Rayam (No. 99). Dzansi finds no one in his gap and climbs to the second-level. Linebacker Max Richardson (No. 14), who terrorized the Hokies in the opener last season), trails a step behind Turner's motion with the intent to key Hooker's mesh and provide an unblocked hat to either fill on the dive or pursue Turner into the boundary. Dzansi absolutely clobbers Richardson and sends him careening backwards. Hooker explodes through the hole, and then makes boundary safety Jahmin Muse (No. 8) miss an arm tackle. After a first down penalty put the Hokies behind the sticks, that seemingly ineffectual bump by Darrisaw made the play.

The zone read plus the variety of play-action passes and variations off the basic run concept to keep the defense honest remains the most effective series for Tech. Boston College made adjustments to defend it, and Cornelsen, Hooker, Herbert, and the offensive line were able to execute appropriate countermeasures.

The Eagles utilized some strange defensive alignments and a variety of corner and edge blitzes to prevent Tech's runners from getting to the edge.

On this zone read, the Hokies aligned two receivers and James Mitchell as a wing to the top of the screen. BC's defensive line shifted heavily opposite that, with Valdez (No. 97) aligned as a 7-technique well wide of Darrisaw. Barlow (No. 44) and defensive tackle Luc Bequette (No. 93) were lined up on the outside and inside eye of Nester, respectively.

Fuente Sees a Need for 'Drastic Improvement' on Depth as the Hokies Move Through Spring Practice
Alex Koma, 04/08/21
23 hours (81)