Halfwits and Wagers Misses ECU. Or ODU. Or Even Directional Michigan Schools. 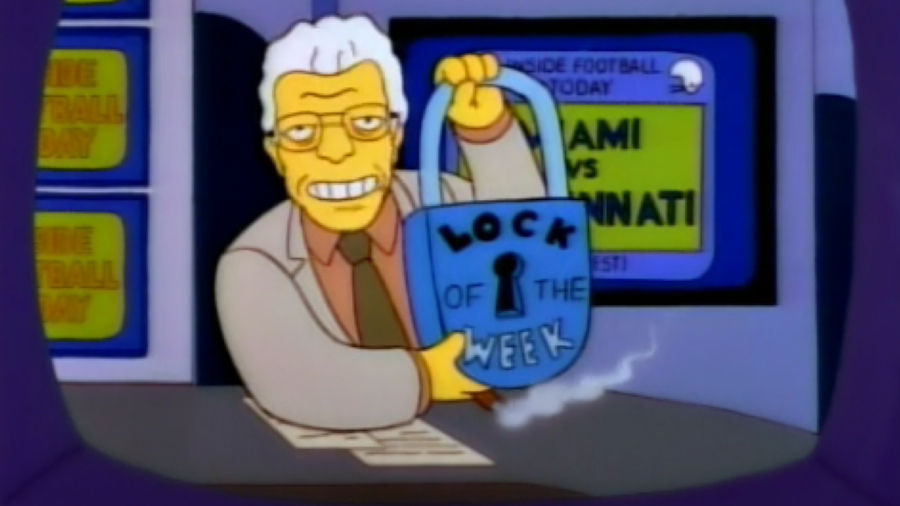 Virginia Tech returned to its winning ways last week in Louisville, narrowly surviving a potent Cardinals' offense that racked up nearly 550 yards in a wonky 42-35 defeat. It was an equally impressive comeback for The Fifth Fuller, who eeked out a draw on the back of a sneakily perfect uniform prediction and an overturned Rutgers play.

Over / Under: 140 rushing yards for Khalil Herbert

Joey: Betting on Khalil Herbert seems to be the safest bet in gambling these days, and the film nerds experts at Pro Football Focus continue to take notice.

And while Liberty boasts a top 25 rushing defense through six games (No. 24, to be precise), their schedule has consisted of the worst team in the ACC (Syracuse) and five teams you could have reasonably concluded were likely sitting out the 2020 season due to COVID-19. So yeah, I'll take the Hokies' high-powered rushing attack to dominate early and often against an overmatched Liberty front, and Herbert promises to be the primary benefactor. Over.

The Fifth Fuller: A real murderer's row of competition here, including directional Alabama and Kentucky schools and a Syracuse team that can't even boast the scrambling Greg "Teabag" Paulus in the backfield. When playing competition that you shouldn't bother with, a concern could be that if the Hokies get up big early, starters get pulled and unless Herbert busts two big runs, 140 seems like wishful thinking. However, even up 19 with less than three minutes to go, not only was Hooker still in the game, they were still RUNNING HIM, so the coaching staff may not be familiar with this concept of pulling starters. In addition, even if the Hokies are scoring points for fun, they have not had a lot of luck in stopping other competent offenses from doing the same, so this game may be closer than most of us would hope. So yeah, Herbert is playing at least into the 3rd quarter, blows open enough big runs to top 140. Over.

Joey: Naturally, as soon as I took this weekly line off the column, my consistent pick of Tre Turner delivered his highest receiving haul of the year (with a jet sweep rushing touchdown serving as a nice exclamation point). That said, part of me wants to go with the field here, going out on a limb that Raheem Blackshear, Kaleb Smith, or an assortment of transfers will finally break out against the Flames.

But the smart play here continues to be Turner, as Liberty figures to employ a similar defensive game plan that Tech saw against Louisville -- stack the box, man up on the outside, and pray Hooker can't take advantage. Expect a low total passing output for the Hokies (although ideally more than a single pass attempt every 6 minutes) and for Turner to come out on top.

The Fifth Fuller: Yep, Tre had a well deserved good day on Saturday, and hopefully get snatches a couple of fades in the end zone this coming Saturday. HOWEVER. Despite a minor blip, Tayvion Robinson continues to vacillate between 2 catches and 4 (with the exception being Wake, where he caught 3, but let's never talk about that game ever again). Last week against Louisville? 2 catches. This week? FOUR. Which will lead the team!

Over / Under: 1.5 mentions of Hugh Freeze getting a Power 5 Job

Joey: With seats getting hot at a litany of big-name programs (when was the last time both USC's opened up in the same year?), it's a near certainty that Hugh Freeze's name comes up in the coaching carousel conversation at least once. This line comes down to the second reference, which could manifest in one of two scenarios.

Not to ruin the final line, but I think Tech wins a fairly competitive game on Saturday, so I'll go under and pray that the ACCN can intelligently focus on a relatively close football game in the second half without discussing Freeze's next career move.

The Fifth Fuller: LOL, wut? Wait, the guy who did this:

RT @CoachHughFreeze: If you have facts about a violation, email compliance@olemiss.edu. If not, please don't slander the young men— Bruce Feldman (@BruceFeldmanCFB) February 1, 2013

Which was immediately followed by Ole Miss getting SLAMMED for violations and Freeze getting firedinvoluntarily resigning for calling escorts on his work phone? I get that a big part of sports is all about redemption arcs and people overcoming their demons but c'mon. In a job market where you either commit to playing the angel (Dabo, Gus Malzahn) or you don't care and play the devil (Nick Saban, Mike Leach), Freeze went all in on the angel play and got his mask yanked off. I recognize that the SEC is a morally bankrupt cesspit where wins can make fans and ADs overlook anything, but I think we're a little early in the redemption arc for this. Freeze is making $2M a year, coaching for an AD who has a history of being cool with a little moral ambiguity and hasn't made enough of a splash to be casting dewey looks at a P5 job. Yet. He keeps winning in Lynchburg, he could get a shot again, but not yet. Under.

Over / Under: 450 yards of total offense for Liberty

Joey: I'm a bit torn on this one. Yes, the final box score against Louisville looked bad. But upon further review, Justin Hamilton's struggling unit showed flashes of competence against the Cards, and may have been just a few busts away from posting its most impressive performance of 2020 (relative to the opponent, at least).

Enter Liberty, a high-octane spread attack led by former Virginia Tech (de)-commit and Auburn quarterback (lol) Malik Willis, which just so happens to be ranked 17th in the land in total offense (one spot behind Corny's crew). And in news that will undoubtedly please a fan base scarred by years of watching dual-threat signal-callers run roughshod over Tech defenses, Willis leads the Flames in both passing and rushing. So while blindly taking the over may be the play, I'll go under thinking that Tech's defense cleans up a few breakdowns and holds Liberty to a respectable 425.

The Fifth Fuller: You know what, I was fully expecting Cunningham to blow the doors off of the Hokie defense that has not been able to handle a running quarterback since...um...the Norman invasion? And yeah, he did pick up 47 yards (netting out sacks) but that was nowhere near as bad as I was expecting (cough, Lynn Bowden, cough). Malik Willis is a different proposition, averaging almost a 100 yards per game, and a mobile quarterback has traditionally been the most effective way to neutralize a Foster defense. But we're not DEALING with a Foster defense! While Liberty has been impressive, the Hokies have only given up over 450 twice, to that UNC juggernaut and the somewhat flukey Louisville game. Under.

Joey: Sadly, the Pumpkin Patch special wasn't meant to be, as Tech stayed traditional with the maroon-white-maroon combo against Louisville to avoid drawing unneeded attention to the fact they had just lost to Wake Forest. But with order and reputation restored (for now), I think the flashy orange makes it's joyful return to Blacksburg for Liberty week. Give me orange helmets, maroon jerseys, and maroon pants, with Tech saving #ALLMAROONEVERYTHING for a showdown with Miami.

The Fifth Fuller: I think Joey's onto something here. Tech tends to trot out the weird helmets for the lowly out of conference competition, and this is the only opportunity for that this season. We've already seen the white helmets twice, and I haven't heard anything about Hokie stone, Foghorn Hokiehorn helmets, camo, etc. Orange lids it is. Maroon jerseys for the home game, but this might be just me being annoyed that Tech's even playing Liberty, but there is no way they deserve anything approaching AME. White pants. A look not seen since Duke, 2017.

Joey: I've won 3 of my last 4 locks (with the only loss being 100% on Jarrett Guarantano being physically unable to lead a scoring drive against Kentucky), so I'll stick with what's working -- Big 12 Overs. Give me Texas / West Virginia Over 55.5, with the only logic required being that these are two historically good Big 12 offenses blessed with a total that starts with a '5'. Don't think, just bet. Over.

The Fifth Fuller: THANK GOODNESS FOR B1G REFS! In the Indiana-Rutgers game, this happened:

Which then got called back, preserving an Indiana cover. Phew! Thanks Rutgers, for being dependably terrible. However, when the spread starts getting up high enough that it's competing with my age, as is the Rutgers-anOSU line this weekend, even I'll stay away. One other dependable rule in college football is that the only thing worse than New Mexico football is New Mexico State football. Since NMSU is not in action, we're going with the late game, as the Lobos are traveling out to Oahu to get pummeled by the Rainbow Warriors. Hawaii by -15.5.

Joey: I'll keep it short and sweet as I already alluded to this line above. Tech is the better team with better athletes (especially on offense), but they've been too inconsistent to feel good about spotting two touchdowns to an undoubtedly overranked, likely cheating, but still semi-decent Liberty. Tech wins without a ton of worry in the fourth quarter, but the Flames stay within the number.

The Fifth Fuller: Well, picking the Hokies to not cover appears to not be the reverse hoodoo I thought it would be. So now I have to resort to what I actually think is going to happen. Yes, the Hokies are going to put up points. Yes, Liberty is going to put up points. However, I'm fairly confident that, as Joey says, the Hokies have the better team with better athletes and that's going to pan out over four quarters. Hokies cruise, and the scoreline rivals the BC one for most lopsided this season.

Liberty beats Tech and Hugh Freeze applies for the Tech job at halftime.

Had me cracking up. Well done.

Norman invasion, did you say?

I hope you're correct, but I have 0 faith that it will happen.

Good god Liberty. They have been offering every coaches kid here in FL trying to make connections.

but this might be just me being annoyed that Tech's even playing Liberty, but there is no way they deserve anything approaching AME.

Perhaps since VT will want to bury them they wanted to get the #AME win % up.

"so I'll go under and pray that the ACCN can intelligently ..."

You lost me here.

I feel like the lack of foerensics will hurt us tomorrow, hopefully I am on the wrong side of the wager...

The number 6 hokies wrestling look to defend Cassell against a pack of Panthers
APrimusHokie, 01/26/23
4 hours (61)