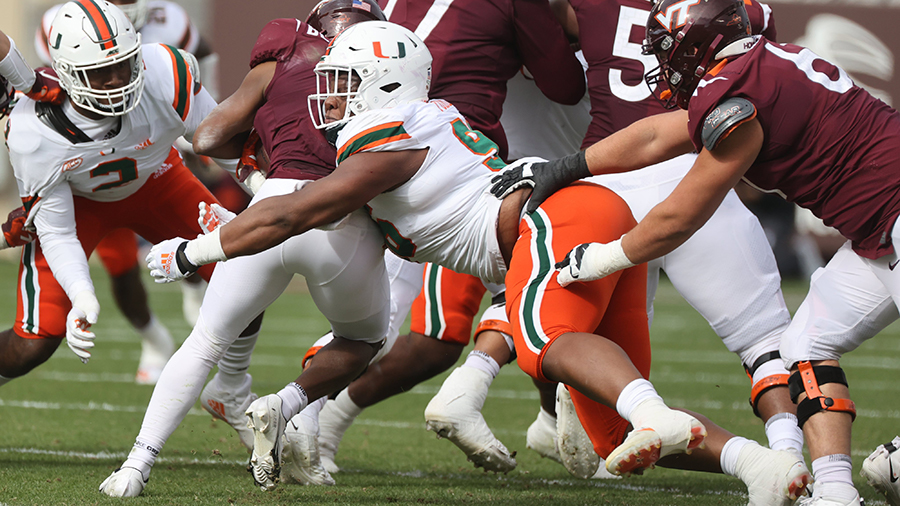 Run down to your local Walmart and stock up on pitchforks. Despite their best defensive effort of the season, the Hokies wasted a late nine-point lead and couldn't generate any fourth quarter offense to drop a 25-24 decision to Miami. The storylines were eerily similar to most of the losses in the last couple of years in the Justin Fuente era; predictable play calling when in long field goal range, the inability to pick up blitzes and navigate the pocket on obvious passing downs, and an inability to execute a two-minute offense.

The offense wasted the defense's best afternoon of the season. There were still weaknesses, primarily the lack of range in the back-end hurting the Hokies in space, the lack of consistent dominance up front, and the lack of range at linebacker. However, the Hokies followed the mantra I talked about mid week; "Nothing Cheap and Nothing Deep" to force Miami to grind their way down the field. Most importantly, Virginia Tech's tackling was much better, while several players who have struggled took steps forward in the scheme.

As I dissected in previous columns this season, the Hokies primarily played a single-high safety look with Devin Taylor, while Divine Deablo played as an extra hat in the box. However, I noted several adjustments and examples of improved play.

On the above RPO, Miami gives on the power run into the boundary. Left tackle Zion Nelson (No. 60) and left guard Ousman Traore (No. 66) block down. Initially they double team 3-technique DT Norell Pollard (No. 96), and then Traore peels off and climbs to Deablo (No. 17). Right guard DJ Scaife (No. 51) pulls across the formation and leads up into the bubble outside of Pollard to seal Rayshard Ashby (No. 23).

The Hokies attack with a whip blitz from the field. Chamarri Conner (No. 22) comes off the edge, but note this wrinkle. Instead of the defensive line slanting to the boundary, Tech stunts. Jarrod Hewitt (No. 25) slants outside from his 1-technique alignment, and DE Justus Reed (No. 9) drops behind him. Center Corey Gaynor (No. 65) blocks down on Hewitt while he picks off right tackle Jarrid Williams (No. 62.) Reed mirrors Scaife and then fills in behind the pick to make the tackle on running back Jaylan Knighton (No. 4.)

There were still breakdowns up front. This one in particular was egregious.