Laying out how Virginia Tech football wound up in its current situation, the money question(s), and the allure of the Hokies' head coaching position. 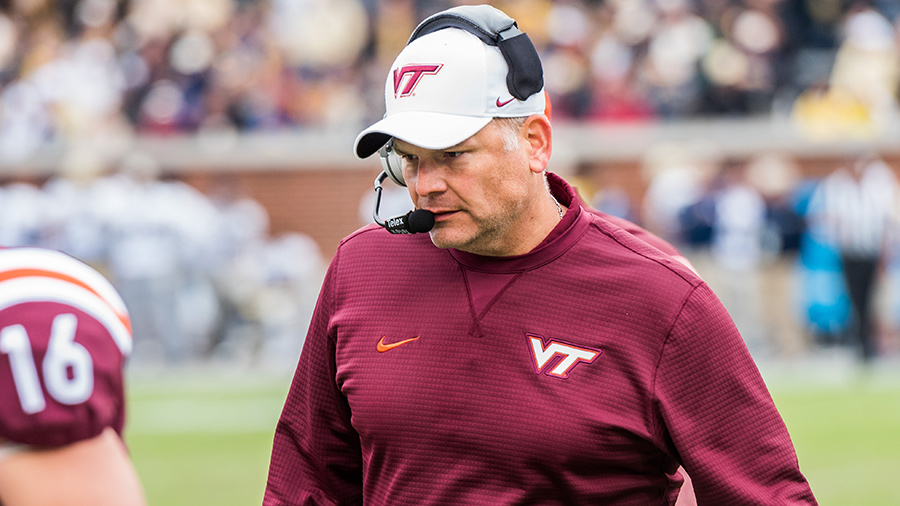 At times of personal crisis, it's best to have a period of self-reflection. Though you may want to sit around and feel sorry for yourself, it's only possible to move on if you ask yourself hard questions and look in the mirror for the subsequent answers.

Well, the Virginia Tech football team is facing a crisis. A top-to-bottom emergency that has the program staring down the barrel of an identity-less irrelevance it hasn't seen since 1992. And the only way to push past it is if all parties — administrators, coaches, fans — begin to take stock of what went wrong and identify how to move forward.

So let's ask a few tough questions about where the program stands, and how we all got to this point.

Unfortunately, yes. As fans, we live moment-to-moment. The most recent failure is always the most calamitous, the most damning piece of evidence that the current administration is over. But there's often a small, rational voice in the back of your head saying this won't be it. That there are still things in the way of Whit Babcock actually pulling the trigger and firing the most important hire of his career as an athletic administrator.

And usually, that's a smart way to think of these things. I was in the press box covering the infamous Virginia Tech-Wake Forest game in 2014, and just after the (rebuilding and truly awful) Demon Deacons came away with a 6-3 OT win, I caught a glimpse of Babcock. I was convinced I saw the face of a man who made a decision to move on from his head coach, and after a third consecutive underwhelming season and a loss to that Wake team, how could you think otherwise?

And then, Frank Beamer came back for the 2015 season. Sometimes reactions in the moment, no matter how telling you think they may be, don't actually mean anything in the big picture. And for a while, it felt like things were trending in that direction. You could easily write off 2020 as a COVID-fueled nightmare in which the Hokies lost four games by 20 points and could've easily been 7-1 heading into Pittsburgh.

It won't be one result that pushes Fuente out the door, it'll be a year's worth of them. Let's review:

He was then outcoached by Mark Stoops — maybe more damning than losing to UVA — blowing a 4th quarter lead against a Kentucky team with a wide receiver playing quarterback. Fuente kicked a field goal on 4th-and-3 from the Kentucky nine to secure a surmountable six-point lead, and then predictably watched the Wildcats string together an 18-play, 85 yard drive that literally bludgeoned Tech to death.

He then tried to take the job at Baylor, had it publicly blow up in his face and tried to act like it never happened:

He then signed Tech's lowest ranked recruiting class since the turn of the millennium.

He then, in the middle of a global pandemic, had to deal with his most talented player not just opting out of the season, but framing his decision in what could only be described as institutional indifference:

This year at Virginia Tech, at our workouts, I started having deep concerns about staying healthy. Guys were going home, going to Myrtle Beach, coming back to campus, and we weren't getting tested. We're all together, working out, close to each other, and you have no real idea who might have it, if anybody might have it. One day I looked around, and we were like 100-deep in our indoor facility, no masks. My concern grew more and more.

And that was before the 2020 season. The Hokies gave up 56 points to UNC in a painful display of programs headed in the opposite direction. They lost to Wake Forest. Fuente committed coaching malpractice and Tech, again, lost to a second-tier, in-state program. They blew an 11-point second half lead against #10 Miami. And THEN they got boat raced by an average Panthers squad.

And that doesn't even get into the transfers, the lack of development from a single quarterback and the ex-players going off.

Y'all keep trying to figure out why players are leaving, why we can't get big time recruits, why can't the team get over the hump? One thing between Justin and Frank was their morals, principals, and how they are as people regardless of this football shit.— Chris Cunningham Jr (@IAM_CC2) November 22, 2020

How'd we get here?

Well, there's two answers to this question, but let's get to the administrative one first. Babcock extended Fuente twice in his first two seasons, not only raising his salary but raising his buyout dramatically. In the original contract the Hokies would owe their head coach a mere $3 million if terminated in 2020. That number has now skyrocketed to $10.5 million — a figure burned into every fan's brain — if Tech fires Fuente after December 15.