Is Jordan Williams the Jammer the Hokies need in the middle?

Breaking down the film of the former 4-star Clemson signee's film to determine how he fits within Virginia Tech's defensive scheme. 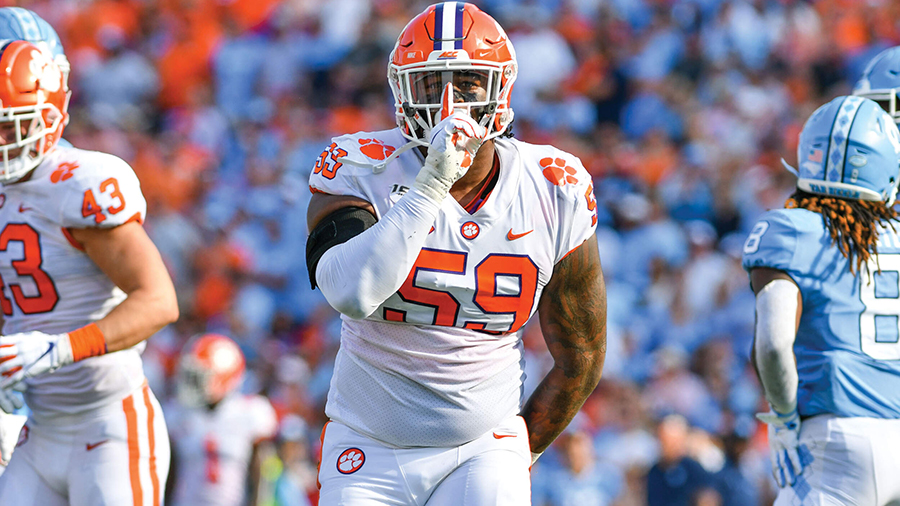 News hit last week that former Virginia Tech defensive line target Jordan Williams would transfer from Clemson to Virginia Tech. Williams, listed as a 6-4, 310, will have two seasons of eligibility to show NFL scouts that he is a viable defensive tackle prospect at the next level after spending most of his career with the Tigers as a top backup.

Williams joins a defense in transition. Defensive line coach Bill Teerlinck's techniques, which featured aggressive downhill penetration and "read as we rush" reactions to the play, were very slow to take hold. Offenses were able to get away with single-blocking Tech's defensive front, making life miserable for its linebacker corps. As the season progressed, Jarrod Hewitt and Norell Pollard began to make some plays when one-on-one, leading to better overall performances against Clemson and Virginia.

Williams understood the Hokies' scheme can highlight his playmaking ability and provide an immediate opportunity to start.

"What Tech does (is) something that was very appealing to me," Williams told the Daily Press. "At Clemson, we ran a lot of three-down and only one defensive tackle was on the field, so there's a lot less opportunity if you're not that main guy. I feel what else was so appealing (about Tech) is how they approach the game. They're attacking, they're physical, they're fast, and I feel like that's the type of system that can suit my athleticism and my ability."

I expect Williams to fill the role of the cocked or eagled nose tackle in Teerlinck's scheme. In Buffalo, nose Star Lotulelei's job was to penetrate into the A-gap enough to command a double team, and then tie up both blockers without being washed out of the hole. That would allow Tremaine Edmunds to stack behind Lotulelei and run sideline to sideline clean.

The common thread for Virginia Tech is the need for the nose tackle not to only eat up space with sheer size, but to instead have enough presence to neutralize a double team while still having the quickness and reaction time to make plays when single blocked. Teerlinck wants a playmaker in that role, not simply a body gumming things up inside.

With that context, assessing Williams is challenging primarily because of how Clemson utilized their defensive linemen. Defensive coordinator Brent Venebles deployed his defensive linemen last season like pawns, jamming up blockers to allow his linebackers and edge defenders to make plays. Williams played a significant number of snaps, but wasn't responsible for making plays. The key to reviewing his film is trying to identify if he has the physical skills to become a playmaker in Tech's defense, even if the film isn't going to show him putting up a large number of "wow" plays.

The most important element of Williams' game that translates to Teerlinck's scheme is his get off. Williams has a very quick first step off the ball and that immediately puts offensive linemen on the defensive. On this 2nd-and-9 pass rush, Williams (No. 59), who ultimately aligned as a 3-technique to the field-side, had a tremendous burst off the football.

Right guard Loic Ngassam Nya aligns recessed well off the line of scrimmage. Despite that extra space, Williams' first step was so quick that he gets into Nya's body and then sheds to the inside. The center and left guard shift across to help subdue the great rush and Williams pushes both back into the pocket without losing his pass rush lane integrity. When quarterback Sam Hartman tries to climb the pocket to avoid edge pressure, he has nowhere to go.

While I love Williams' first step, I would like to see him be more of a playmaker. On this inside zone, Williams was so quick through the gap that he was almost behind center Brock Hoffman before Hoffman made contact. However, Williams seemed to freeze and didn't flatten out to cut off the runner.

Storm Murphy has his Eye on Helping the Hokies win a Conference Championship
Joe Lanza, 03/16/21
4 hours (13)