Four Questions as the Hokies Approach the End of Spring Practice

Thoughts on the decision to forgo the spring game, Tech's attempt to backfill coverage via social media, perhaps Burmeister was the best quarterback option all along, and Tech's most important player, err coach. 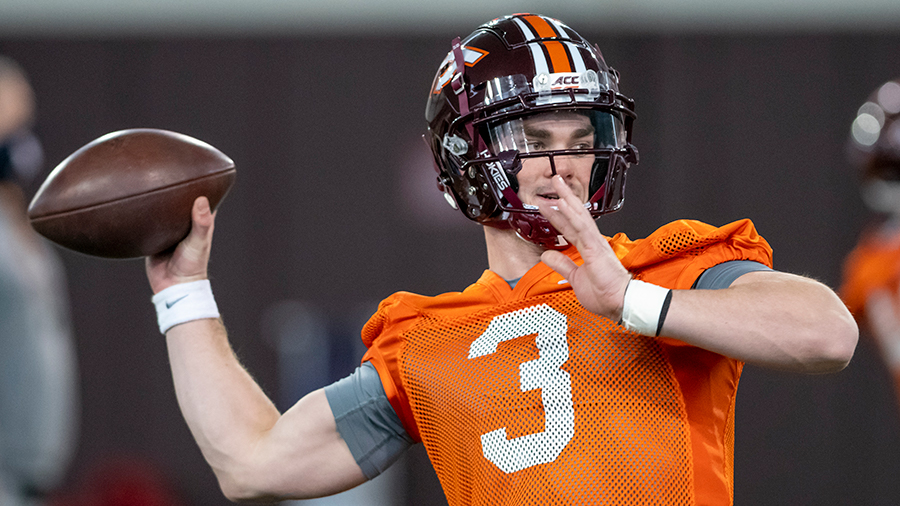 Braxton Burmeister drops back to pass during Tech's first practice of the spring. [Virginia Tech Athletics]

The Virginia Tech football team is in the middle of spring practice, and while access to the inner workings of the team has been limited (more on that in a moment), we've still seen enough over the last year to ask a few burning questions:

Is spring game something we actually care about?

Or is it just another excuse to be mad online at the athletic department?

Don't get me wrong, after the year we've all had I think everyone would love an excuse to get outside, drink a few beverages and watch their favorite team scrimmage against itself. But it feels like the cadre of Chicken Littles who flooded my timeline the minute the news was announced may have hyperbolized just a bit. Holding it up as "yet another example of the administration spitting in the faces of its fans and just. not. getting. it." felt like another hot take brigade, allowing a small number of people to flex their Twitter thumbs.

Don't get me wrong, there are reasons to be annoyed at the decision. It's really a damn shame that they don't think outside the box around these kind of events, using a platform like the ACC Network (one, mind you, that they've already paid for) to show the program in a positive light. It's basically the chance to have a 150 minute infomercial to show off your coaches and players to recruits, regardless of if fans could attend or not, and they simply passed on it.

If it were me, I probably wouldn't run a traditional "spring game" — they don't even have enough scholarship offensive linemen to field two teams — but instead create some sort of Hokie football event. Maybe make it fun for the players and roll out a set of mini-games that let them show off their best stuff on live TV. Just a glorified set of drills meant to let the guys have a good time, and give them a bit of extra exposure.