Finding an Answer at Wide Receiver

A pair of true freshman wideouts — Da'Wain Lofton and Jaylen Jones — have received plenty of hype this offseason. Breaking down how they can supplement the Hokies' receiving corps. 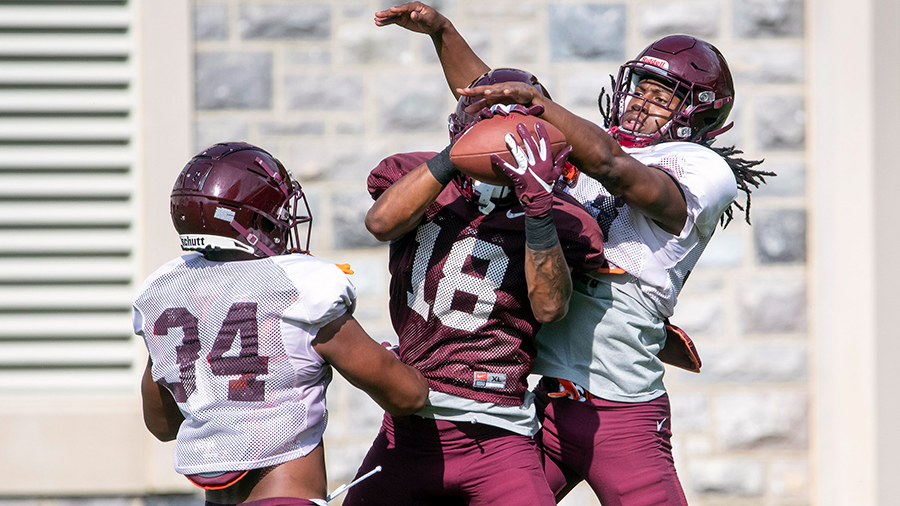 While Justin Fuente and Brad Cornelsen have stated a goal to have a deep and reliable stable of wide receivers, depth has been a problem throughout Fuente's tenure. The offseason saw the transfers of Elijah Bowick (a prospect I was very high on), Evan Fairs, and Tyree Saunders. Plus a season ending ACL injury to Changa Hodge. While Tre Turner, Tayvion Robinson, and Kaleb Smith bring experience, and Swiss army knives James Mitchell and Raheem Blackshear can flex wide, one injury can quickly make the Hokies one-dimensional on the outside.

The lack of depth in the spring presented an opportunity for new faces to step up and force their way into the rotation. While very little offseason footage has been shared, early enrollees Da'Wain Lofton and Jaylen Jones have been consistently identified during media opportunities as two players who were making an impact.

"Jaylen Jones, Da'Wain Lofton, two true freshman that came at midterm and got to go through spring and through the offseason and it's paid off," said Cornelsen. "It's hard to believe they're just true freshmen. Really, really excited about those two guys. Those guys are gonna be big roles on special teams and they're gonna be a factor for us offensively too."

Lofton, a 3-star recruit from Fort Worth, TX, is listed as 5'11" and 190 pounds, but is physically powerful as he was spotted maxing 495 pounds during the final Big Squat Friday of the spring.

#Hokies #ThisIsHome ⁦@DawainL⁩ Supposed to graduate from high school in a couple of weeks. Instead he is in Blacksburg, VA lifting the house. 👀🦃🔥😤💯📈💪🙌 #TX2VT #TEXASFLEX pic.twitter.com/rHAARkXFhV— Coach Davidson (@Beau_Davidson) April 30, 2021

As a high school player, he was limited in his touches at wide receiver his senior year, as his high school team did not have a particularly impressive quarterback. Because of Lofton's athleticism, he was utilized as a receiver, a wildcat quarterback, and a running back in order to get touches.

Despite the lack of volume in terms of catches, Lofton shows a lot of qualities which will be valuable as a slot receiver in Virginia Tech's offense.

Cornelsen specifically mentioned Lofton when asked about a player fans might not know, but would by the end of the season.

"Lofton as a young kid, early grad, got here, went through spring ball. I think he really impressed the team, the coaches, with where he was at maturity level wise. He's a guy that has not taken a snap in the stadium yet, but I think will have a chance to show up as a true freshman."

I was particularly impressed with his ability to identify which leverage a defender is using in coverage, force the defender to give ground, and then break into empty space.