2,500-word, 8-play film preview detailing an effective UNC defensive wrinkle, personnel analysis, and the importance of forcing the safeties to respect the pass. 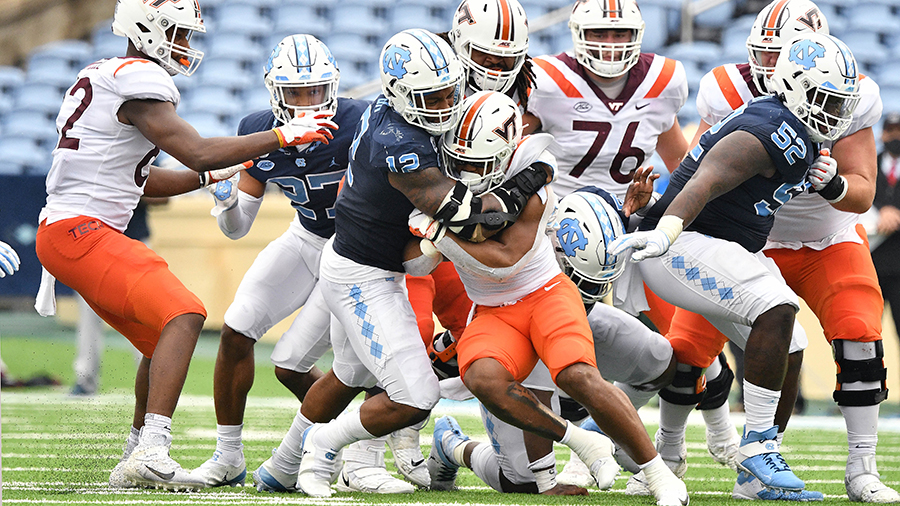 DE/LB Tomon Fox (No. 12) provides a lot of versatility and flexibility in the trenches for UNC's defense. [North Carolina Athletics]

UNC is a base 3-4 team, lining up with three down linemen. The ends line up as five-techniques, with one occasionally shifting to a three. The nose usually lines up eagled rather than head up on the center. The down linemen will slant and stunt, aiming to hold the line of scrimmage and tie up as many blockers as possible.

A Little Extra Something at Linebacker

However, against the Hokies last season, co-defensive coordinators Tommy Thigpen and Jay Bateman deployed a change up, a variation of a two-down lineman look with five linebackers hovering around the line of scrimmage. They often went to this package when Tech used two tight end personnel, which was Tech's best run personnel package all season. To the offensive line, the front looked very similar to a 4-2-5, with two defensive tackles with playing heads up on each guard, two inside linebackers with the boundary linebacker head up on the center and the field linebacker head up on the tackle to the field-side, and two outside linebackers playing like stand up defensive ends.

However, instead of playing a nickel in the slot, then-backup inside linebacker Eugene Asante aligned as an extra linebacker wide to the field-side. Asante, who made a pair of starts in 2020 (Tech and Texas A&M), is expected to continue that role next to Jeremiah Gemmel at ILB. Asante has terrific speed to run plays down from space. From the look, Bateman and Thigpen called a variety of run blitzes, most of which were designed to keep Asante clean as a free hitter. Even when the Hokies got blockers to the second-level, they seemed confused and hesitant, allowing Tar Heels defenders to run by them.

Here is an early example. The Hokies are in two tight ends (12 personnel) with one on each side of the line. The Hokies run a zone right, right into the side where Asante is lined up wide.