Sitting on the Outs: Analyzing Virginia Tech's 35-14 Win Against MTSU

4,000+ word, 17-play film review examining how MTSU took away Braxton Burmeister's comfort zone in the passing game, wide receiver play that left a lot to be desired, winning the numbers game on the LOS, continued fundamental improvement on defense, and valuable work for inexperienced depth players. 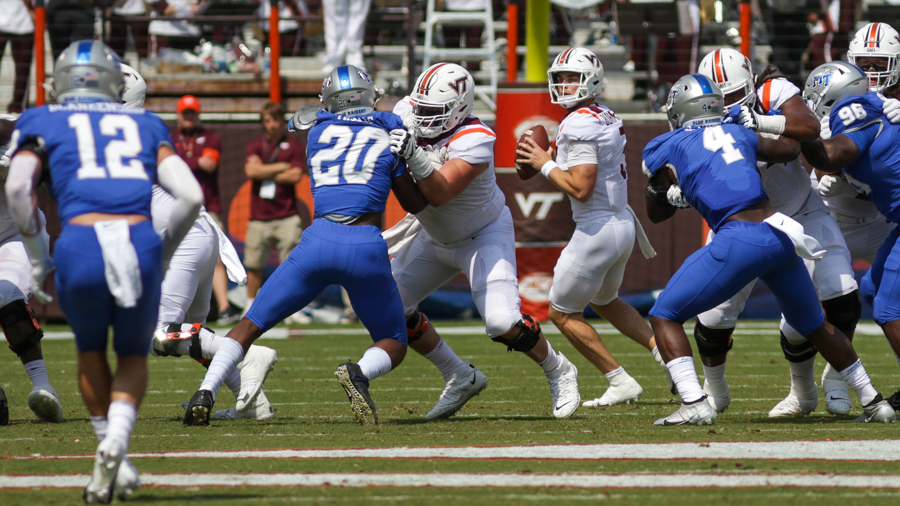 Throughout the Justin Fuente era, Virginia Tech has struggled putting away G5 and FCS opponents. After an exhilarating win over 10th ranked North Carolina, it wasn't surprising that both the atmosphere of Lane Stadium and the quality of the Hokies' play didn't rise to the same level for Middle Tennessee State. The Blue Raiders hung around in a first half that mirrored recent shaky performances against the likes of Old Dominion and Furman. Braxton Burmeister's timing and reads in the passing game were not up to par. The Hokies' receiving corps didn't do him any favors with very uninspired blocking and route running. MTSU sat on Virginia Tech's short routes, and the Hokies' inability to threaten deep left safety Reed Blankenship free to put a lot of NFL-caliber film on tape. MTSU won the time of possession battle in the first half thanks in large part to a lack of pressure and soft coverage on quick out routes. I have seen this movie before.

Yet, when it was all over, the Hokies finished with a three-touchdown win. Outside of James Mitchell's absence due to a leg injury, which post-game Fuente alleviated any long-term concerns, the Hokies got out of Lane Stadium relatively healthy. Most importantly, Tech's second- and some third-team players got a significant number of repetitions, with some of those depth players looking like potential contributors. It wasn't pretty, and there are a lot of red flags, particularly in the passing game that need to be cleaned up. However, in other areas, the Hokies played well given how vanilla the game plan was.

The Doughnut Hole in the Passing Game

Optimism isn't the first word that pops into my mind for the Virginia Tech passing game. MTSU played soft man-to-man coverage and sat on the quick out routes that Burmeister had success with at the end of 2020. Tech's wide receivers seemed to release with slow motion, and rarely did anything to threaten the MTSU corners' cushion before curling back to the football. And too often Burmeister was late with the throw. Better corners may have had a pick six or two in the first half.

On this 1st-and-10, Cornelsen schemed up a nice one-on-one matchup for tight end James Mitchell. The Hokies ran trips to the field-side, and Mitchell motioned out late to the boundary, where safety Gregory Grate (No. 1) played out of position at corner. Grate played man-to-man with no help deep. As a result, he gave Mitchell an eight-yard cushion. It should've been an easy pitch and catch.

However, even though Grate concedes plenty of room, he sits on the out route. Before Mitchell even starts his break, Grate plants and closes. 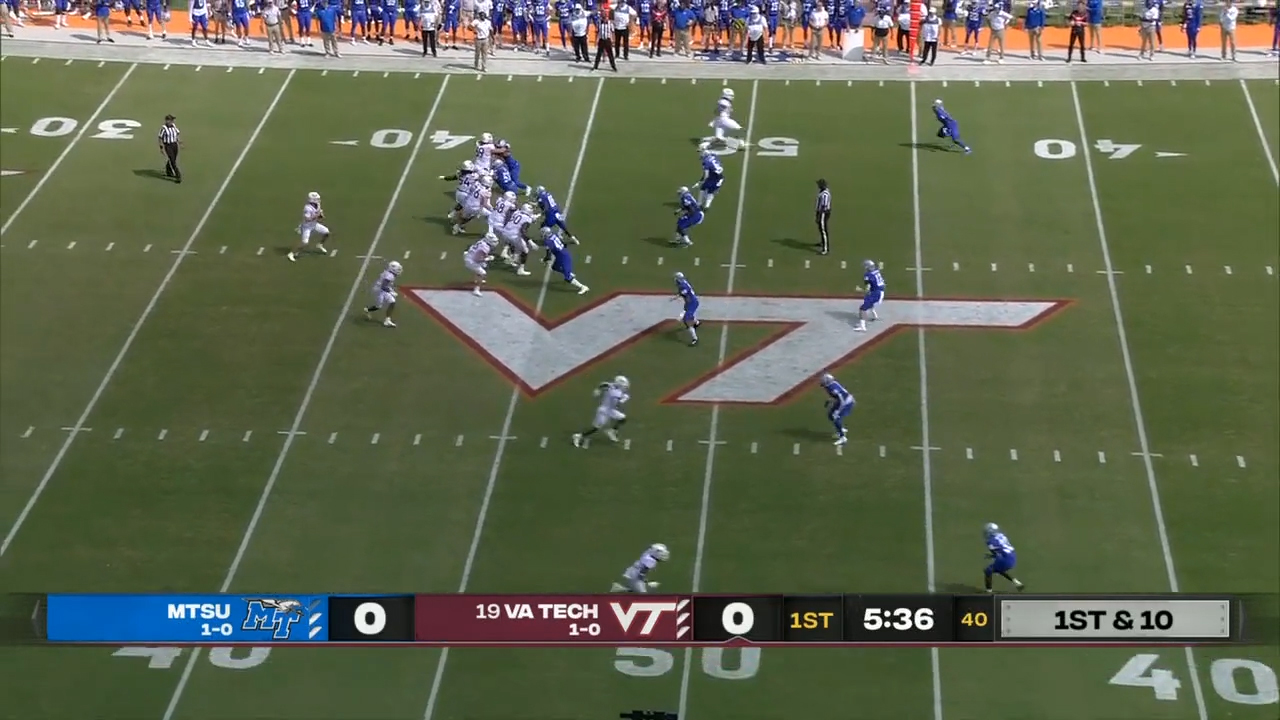 Grate didn't respect Mitchell's ability to run an out and up, or Burmeister's threat of beating him over the top. Mitchell didn't explode off the line of scrimmage like a potential vertical threat, which gave Grate an easy read. Not only has Mitchell failed to sell any kind of vertical route or post, but Burmeister was way too late. The ball doesn't leave his hand until Mitchell's shoulder pads are parallel to the sideline, and Grate has already sold out to break up the out. The ball needs to be halfway to Mitchell when he makes his cut.

The biggest red flags of the first half were Tech's receivers not threatening the cushion of MTSU's corners combined with Burmeister throwing too late, especially given that MTSU's corners were not bailing on coverage. The same thing happened over and over again. Here, Tre Turner ran a vertical from the slot, while Tayvion Robinson ran a stop route.