While the Hokies finally managed to get Tre Turner and Tayvion Robinson involved against Richmond, poor offensive line play and erratic quarterback play is the focus of this 13-play, 2,800-word film review. 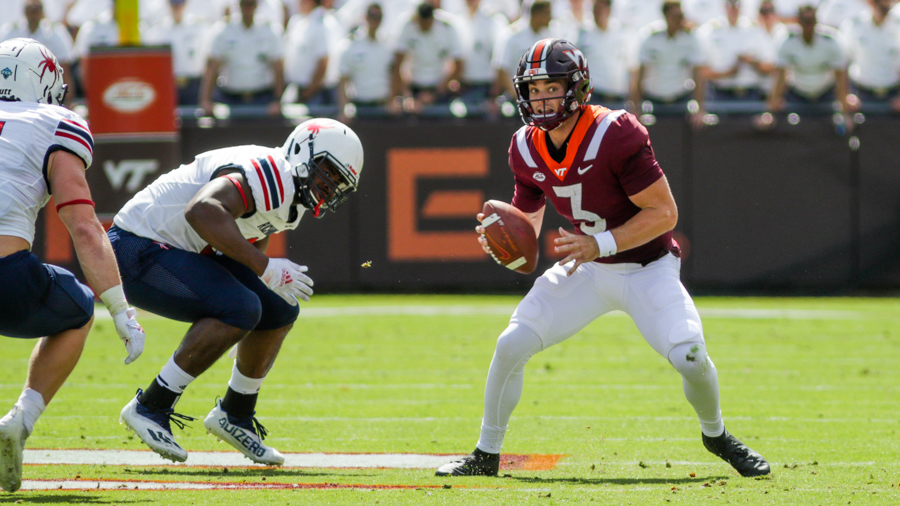 I had hoped to spend my Sunday writing about the positive steps young depth players made in their development against Richmond. Instead, defensive coordinator Justin Hamilton had to ride his veteran defensive stars way too much as the Virginia Tech offense failed to generate any consistent production in the run game. Plagued by poor blocking and a seeming disinterest to simply pound the Spiders with quick hitting inside zones, offensive possession after possession stalled following ugly negative plays on first down. The only positive offensively was that Braxton Burmeister began to get his receivers engaged in the middle of the field. Burmeister was also inexplicably inaccurate with several easy throws, most notably an end zone toss to a wide open Tre Turner, and a wheel route to tight end Drake DeIuliis. He also often failed to identify receivers running wide open. When the whistle sounded on a 21-10 stomach ulcer of a win, much maligned offensive coordinator Brad Cornelsen heard boos, a huge difference from the love-fest opening night against North Carolina.

The Little Things on the Offensive Line

Shoddy offensive line play has hurt the Hokies badly the last two weeks. Against Richmond, even when plays were successful, I noted mistakes in basic fundamentals that became more exposed when the Spiders shut down the run in the second half.

The 2021 version of Tech's offensive line isn't as mobile as the 2020 iteration, and must rely on good zone blocking principles and body positioning for success. For an outside zone to be effective, blockers should strive for their contact point for their head to be on the outside shoulder of the defender. One of Jalen Holston's best runs demonstrated the Hokies' lack of sharpness up front.

Every blocker zones the gap to their right. The key block was right guard Kaden Moore's (No. 68) attempt to seal d-end Darius Reynolds (No. 9) to the inside. In order to help Moore's blocking angle, right tackle Luke Tentua (No. 69) chips Reynolds before climbing to linebacker Tristan Wheeler (No. 30). He does a great job of initially bumping Reynolds inside, and that block makes the run go. When he engaged Wheeler, Tech had a hat on a hat for every boundary defender.

However, note the point of contact across the board. The offensive lineman have their heads inside on the right shoulder of the defender instead of outside on the defender's left shoulder. Note how both Wheeler and inside linebacker Tyler Dressler (No. 41) both easily slide off Tenuta and left guard Brock Hoffman's (No. 76) scoop blocks, respectively. Johnny Jordan (No. 55) doesn't get his head around d-tackle Kobie Turner (No. 98), and Turner almost immediately cuts Holston off. Good Power Five defenders make that stop, as demonstrated too often last week by West Virginia defensive tackle Akheem Mesidor.